Sophie’s steakhouse in Chelsea is one of those places that’s called ‘a London institution’, but then so was Bedlam, and nobody would think of going there any more. Yet the comparison is an unfair one. Sophie’s, which first opened in 2002, was ahead of the curve of the apparently never-ending Goodmans and Hawksmoors that came after, and acquired a deserved reputation for excellent steak, top-notch cocktails and a clientele who might occasionally have been known to don pink shirts and red trousers, and perhaps be called things like Hugo and Henrietta. Yet now Sophie Bathgate – the eponymous Sophie – has branched out into Soho, along with her business partner Rupert Power, where there is considerably more competition. Can this particular restaurant still hack it?

The answer, thankfully, is very much a ‘yes’, but this is a story that has some unexpected twists and turns. The first thing that you notice when you sidle up to the restaurant along Great Windmill Street is that it is a vast space; the bar area alone is larger than most places, and then the dining area could fit dozens of covers without breaking sweat. My companion noted that it reminded him of the Conran grand spaces that were so popular in the Nineties and Noughties, and that an awful lot of people would have to be seen in here in order for it to feel buzzy. When we visited one lunchtime it was clearly still finding its feet; the buzz needs to get out.

Which it certainly will once people find out about the surprisingly affordable excellence on offer. To give you an idea of why, glasses of wine start at a fiver, the house cocktails at £9, starters (or ‘small plates’) at £5 too and mains from the low teens. Although if you’re ordering as you should be, things are somewhat pricier. 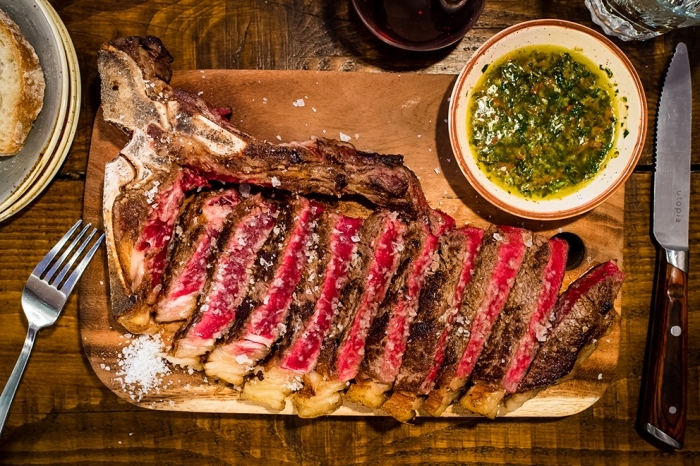 You might want to kick off with octopus and smoked aubergine, rib croquettes and gravlax, and you’d enjoy yourself very much. But you’ve come here to eat steak, and it doesn’t disappoint. A sharing-sized portion of Cote de Boeuf, served medium rare, is as good as anything you’ll eat in London today – the combination of marbled fat and charred exterior is perfectly done, and it all tastes delicious. Sides, including tomato and crushed avocado and creamed spinach, are top-notch, and a bottle of Malbec makes the whole thing go down very easily indeed.

You’ll probably be too stuffed to make many inroads into the dessert selection thereafter, but rest assured that the charcoal panna cotta is relatively light and deeply delicious. Thus, all it remains to do after the obligatory (and copious) espresso martini is to walk outside into a grim, grey January day while feeling that bit more uplifted and merry. And that is what the very best restaurants accomplish, of which this is no exception. Alexander Larman
www.sophiessteakhouse.com

A decade after Sebastian Horsley’s death, Gustav Temple recalls the decadent flash of dandyism that was

“Everyone gets everything he wants. I wanted a mission, and for my sins they gave me

When m’learned colleague invited me to join him for a Chinese meal, my first thought was

A decade after Sebastian Horsley’s death, Gustav Temple recalls the

“Everyone gets everything he wants. I wanted a mission, and