A fashion photoshoot at Hornets Kensington is not just people with cameras taking pictures of people in clothes. It is an opportunity to immerse oneself in the world of Bill Hornets, doyen of this parade of little vintage menswear shops along a quiet alley in Kensington, where so much more than mere clothes is purveyed.
On a sunny day in midsummer, Kensington Church Walk offers a shady old-world thoroughfare, light years away from the architect’s drawing come-to-life of chainstore dystopia that is Kensington High Street.
This quiet, Georgian, leafy little quarter of W8 is presided over by shop windows bearing vintage bespoke tweed jackets, rare Northampton-made shoes dangling from the ceilings, tattered Union flags fluttering in the breeze outside the doors. Hornets takes up three units of this narrow passage, the others occupied by the more predictable Kensington hair salons and florists. But you don’t notice any of those, as soon as Bill Hornets emerges from his shop, immaculate in three-piece suit, Panama hat, walking cane, colourful pocket square and the sunglasses of a legend. He is known as ‘The Godfather of Style’ in these and other quarters, and there is indeed something of the Mafia Da Capo about him. But one whose empire, manned by discreet and polite middle-aged gentlemen, is based on the peddling of the very best men’s clothing money can buy, unless you happen to be the sort of gentleman who bought all this stock in the first place from the golden age of Savile Row and Jermyn Street. 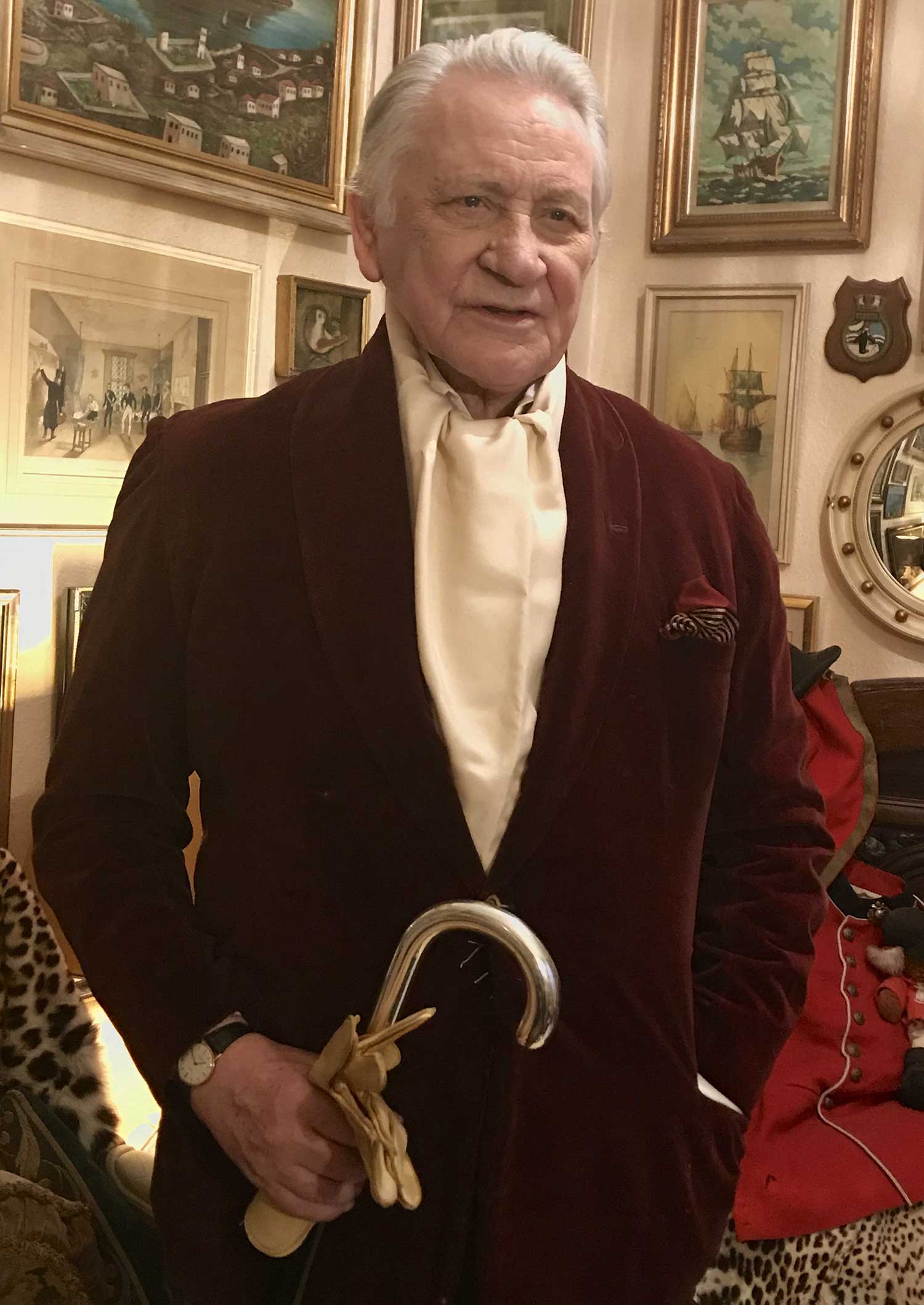 Outside the row of shops there is a low wall, upon which Bill’s staff have placed cushions. They are frequently used, and not just for our photographer Martin to rest his camera. While our models get changed into hand-picked garments from the enormous range of stock, Bill sits on his cushion, resting his hand on his cane, and regales us with sartorial anecdotes, casual references (with no actual name dropping) of his glamorous past as an actor – he played an assassin in an episode of Department S alongside Peter Wyngarde in the 1960s – and the quiet, confident air of a man who encapsulates all the values of this magazine.
Visitors are frequent, making full use of the cushions. Not one of them could be described as ordinary; all of them are borderline eccentric. Even the young fashionistas who stroll by, lost on their way to Urban Outfitters, break into a smile when they see this world they don’t fully understand yet know is a good thing.
Bill never gloats about his stock; he is almost bored of talking about Bladen, John G Hardy et al, but his enthusiasm flares up when he brings out a few choice rarities to show us. A pair of 1920s corespondents by shoemaker Nikolaus Tuczek, who Bill describes as the “Da Vinci of footwear”. The shoes bear a handwritten label saying “Not For Sale”, not because hardly anyone could afford their true value, but because they are displayed in Hornets as works of art. 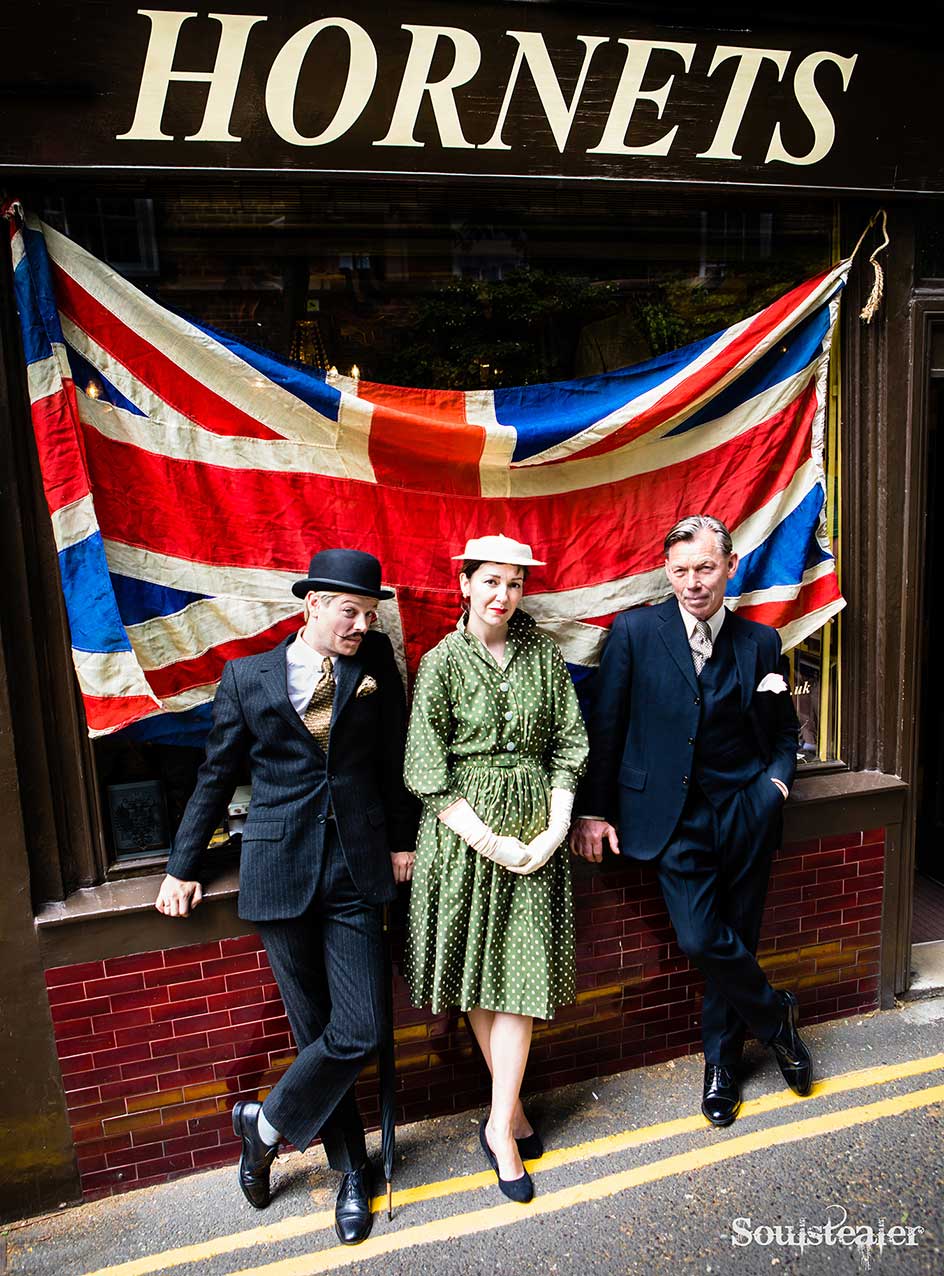 The photographer bustles about, the models dip in and out of the changing rooms to switch from tweed to city suits to hunting wear, despite the sweltering summer heat. Throughout, Bill calmly sits, observing, admiring, offering advice on the correct pocket square with a certain outfit, chatting to customers and well wishers who drift along the lane. There is no need to change anything for our backdrop; even the anomalous palm trees sprouting outside the art deco doorway opposite Hornets figure in some of our shots.
After a few hours, endless cups of tea and about seven gin-and-tonics consumed by the models, Bill invites us to the pub around the corner for lunch. When we arrive, he is already ensconced at the bar with his Panama hat in his lap, cane at his side. “White wine all round?” he instructs rather than asks.
The bottles keep coming to our table, the anecdotes keep pouring out of Bill, all of which have a point to make and aren’t the trivial ramblings of many men in their 70s. How important it is to dress for dinner wherever you are, how you should treat staff courteously and without condescension, that to be a gentleman has nothing to do with money or class or fakery, and how the right clothes should emanate naturally from the right attitude, so that everyone around you feels a slight lift to their mood when in your presence; a feeling that at the heart of everything there is a subtle undercurrent of civility and bonhomie that makes the world a better place.

The photoshoot will feature in the Autumn edition of The Chap, out on 17th August 2018.
www.hornetskensington.co.uk

CHAP Spring 22 is a colourful celebration of remarkable women. After five years with a monochrome

14th May 2022 saw the second instalment of the dandified stroll without
A rainy day in Worthing seemed like the perfect setting in which
The Chap descended on a former convent near St Albans with a
Chris Sullivan on how the end of WWI and the Spanish Flu
On the loss of Charlie Watts aged 80, Gustav Temple recalls the
The Chap uses cookies to improve your experience. We'll assume this is tickety-boo for you, but you can opt-out should you so desire.    ACCEPT    READ MORE
Privacy & Cookies Policy

CHAP Spring 22 is a colourful celebration of remarkable women.

A rainy day in Worthing seemed like the perfect setting