As soon as you cross the narrow causeway to the large island that is Miami Beach, you depart from a world of hi-rise wealth, power and keep-fit fanatics to a world of wealth, power and sun worshippers. The tans on display are unlike any of the lobster-hued disasters you see in Southern Europe – a Miami Beach tan is sleek, smooth, healthy and perfect. Suntan lotion is squirted free from dispensers all over the beach provided by the Miami Medical Centre. To reach the beach itself, you dart off any side street on the main strip, where super-luxury hotels are disguised as art-deco museum pieces. It’s an odd juxtaposition: some of the most beautiful, original, faithfully restored art deco buildings in the world, with elegant retro neon fonts that read Hilton, Marriot, Best Western. The big hotel chains have muscled in, squatting a vintage paradise and turning it into a haven for the wealthy.
Buildings that Hemingway might have taken cocktails in during the 1950s are now establishments that only his publisher could afford. However, there is no denying that Miami Beach is stunning. Not a single edifice looks out of place; everything is crisp white against the sharp blue skyline, mint green and pastel pink details picked out by the constantly fierce Miami sun. All the big global brands have cashed in on the Miami myth: a branch of Starbucks is housed in a stunning art deco tower block, flanked by what was once the Lincoln Theatre, now a branch of H&M. 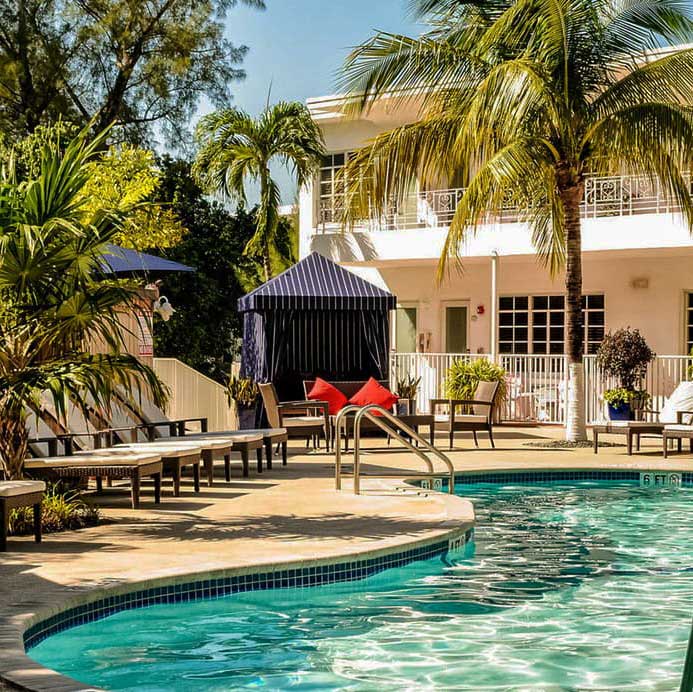 TRADEWINDS APARTMENT HOTEL
Tradewinds Apartment Hotel mines its 1950s heritage with retro signage and furniture. It was like staying on the set of Mad Men, the communal smoking area giving the place a cosy, resident feel. For breakfast you have to walk a few blocks downtown, where we already had our sights set on the third and final diner of our trip. And this time we hit the motherlode. 11th Street Diner is a proper airstream building with all the original fittings. The American dream means many different things to many people, but to this little family unit it meant a red vinyl-seated booth and an endlessly replenished coffee cup. With an authentically vintage menu to match the building, we finally found out what grits are. It’s mashed corn and it’s a real taste of the South. 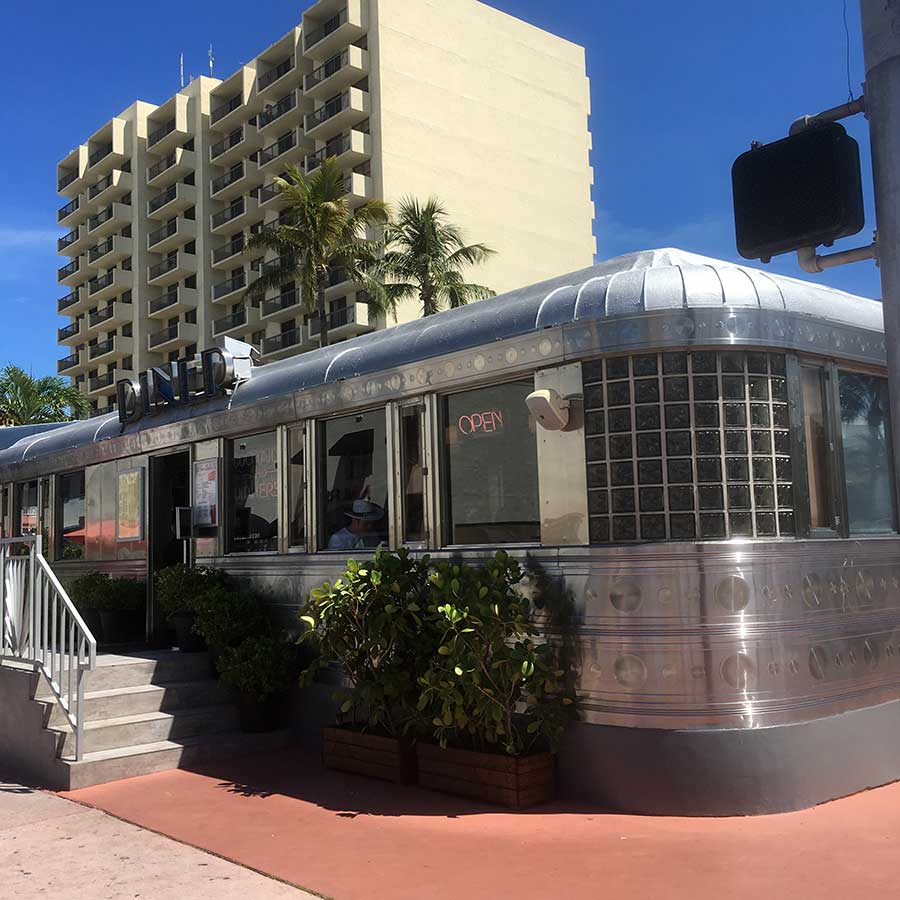 11TH STREET DINER
But we weren’t only here for the grits; we were here for the vibe and there was plenty of that. We headed over to Ocean Drive for another immersive experience, and it didn’t disappoint. Ocean Drive is the strip that matters on South Beach, where the wall-to-wall art deco architecture that used to house Papa Hemingway’s haunts have been inhabited, like surreptitious hermit crabs, by joints with names like Wet Willie’s and Voodoo Rooftop and Hookah. The News Café, where Versace used to take his morning victuals and read the newspapers, was the ideal location for our final breakfast in America. 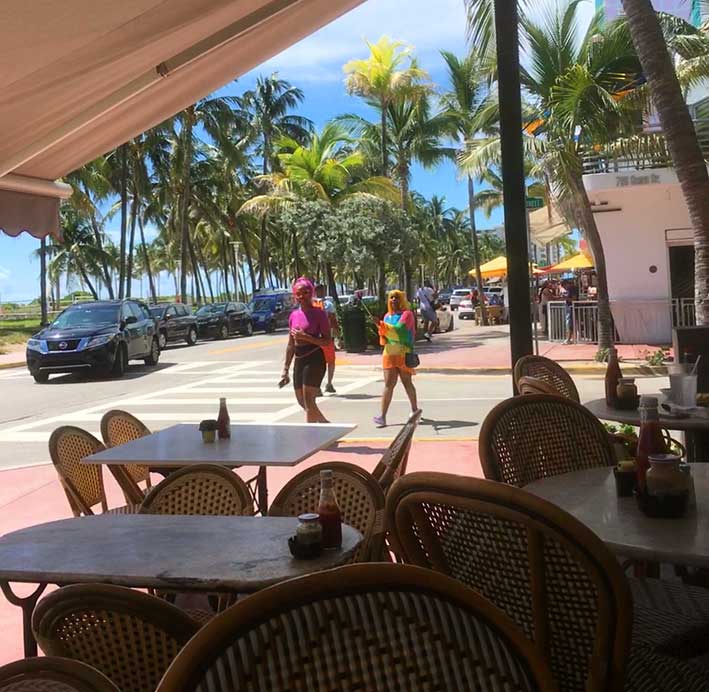 The terrace of the News Café offers a relaxed haven from which to observe the mad, tacky explosion of colour that is modern-day South Beach. While we took our last breakfast in America, two black women in rainbow-coloured skimpy outfits with hair to match sashayed past the entrance. A red Ford Mustang screeched to a halt and the driver, causing a traffic jam, leaped out and secured one of the ladies’ phone numbers, before jumping back into his car to the whoops and backslaps of his passengers and screeching off. The traffic resumed its flow and we headed to the beach to cool off.

THE BEACH
One would imagine that the fashion conscious would head for the portion of this enormous (and artificially constructed) beach that represents their particular tribe. Our tribe was the one that’s too hot and needs a swim, so we randomly entered the arena, smothering ourselves with the free suntan cream. The beauty of beaches, especially with children, is that they are all essentially the same and everyone knows what to do. Yet there is still something magical about floating in the incredibly warm water that is only a dolphin-ride away from the Bahamas, with the view across the sand of art deco perfection rising above the endless palm trees. 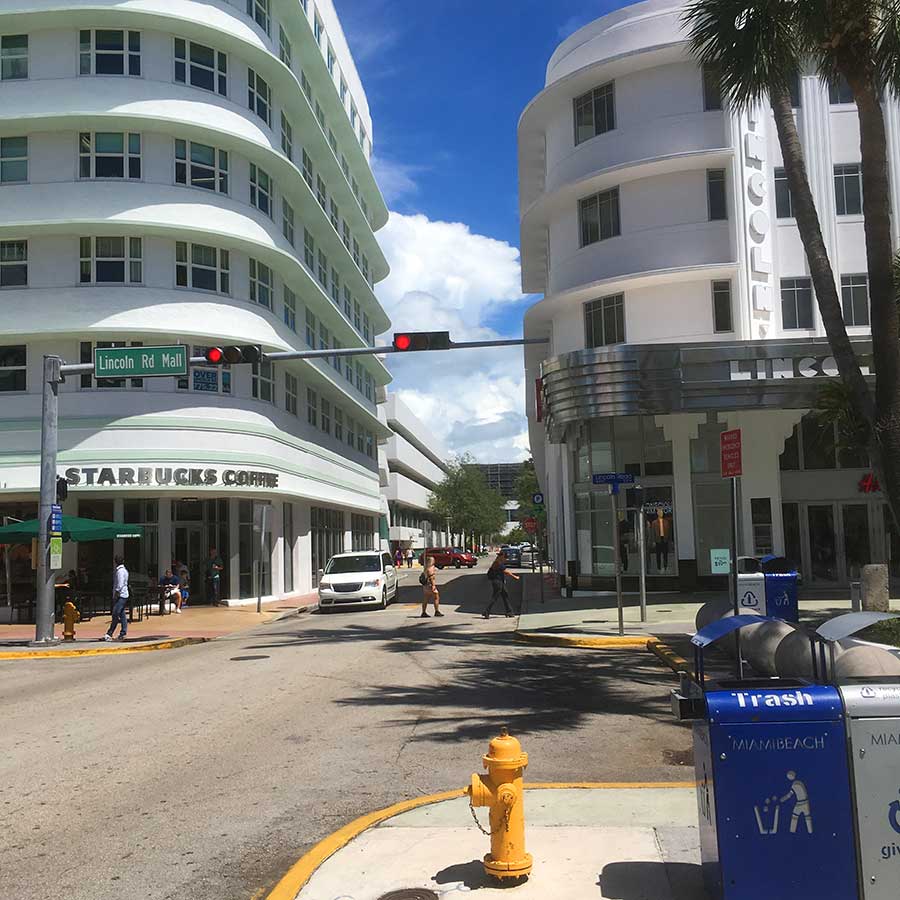 Dinner on South Beach was at new Brazilian restaurant Ofa, which, once again, aroused suspicious glances from my two children. A couple of hefty caipirinhas made it an easy sell: this food is different but it isn’t from Mars. Chef Felipe Ortiz helped out by describing the cuisine to us as “based on the Brazilian food my grandmother used to make.” Lucky old Felipe, as the starters proved a surprise hit with my normally cautious dining companions: deep-fried chicken croquetas accompanied by Queijo Coalho, a roasted Brazilian cheese that puts Haloumi into the shade. The main course was grilled skirt steak with Farofa – toasted cassava flour and Brazil’s superior answer to Southern grits.
Some elements of our journey had replicated similar holidays in southern Europe, but going that extra few thousand miles (and paying no more to fly there than we had on previous holidays to Greece or Spain) had given our week an extra ingredient that only America can provide. My son had turned 13 in Miami and this turning point in his life would not have had the same lasting impact on him had we been on the Costa Del Sol. America invented the teenager and Miami has plenty of them, some of them in their late fifties.
Read Part One of this journey here.
Flights: norwegian.com
With thanks to miamiandbeaches.com

Wherever you look in pop culture, you will see signs of our beloved Chap Fashion. Whether

The imminent launch of a brand-new pocket square design sees

A central hotel that provided a haven for guests during