There are a few cities in the world that carry so much weight of expectation and legend that you get goose bumps down your spine when you come in to land, but nothing had prepared me for the thrill of the pilot’s announcement on this Iberia flight: “Ladies and gentlemen, we are about to descend into Jose Marti International Airport, Havana.” Even before you land, revolution is in the air – or rather in the airport, named after the revolutionary who led the war for Cuba’s independence from the Spanish in 1895.
Customs in Cuba, unlike its neighbour the United States, is a cursory affair. They are so short of everything in this country, as I was soon to discover, that virtually anything you want to bring in is welcome. I had a spare bag full of pencils, soap, toothpaste and branded T-shirts, on the advice of a friend who had visited Cuba and said these items make particularly well-received gifts. I checked into the Hotel Inglaterra, right in the heart of Old Havana. My Spanish is good enough to complete the formalities without unnecessary fuss and the staff seemed as helpful and courteous as they do in any other four-star hotel in the world. It was only when I went outside that things began to get weird. 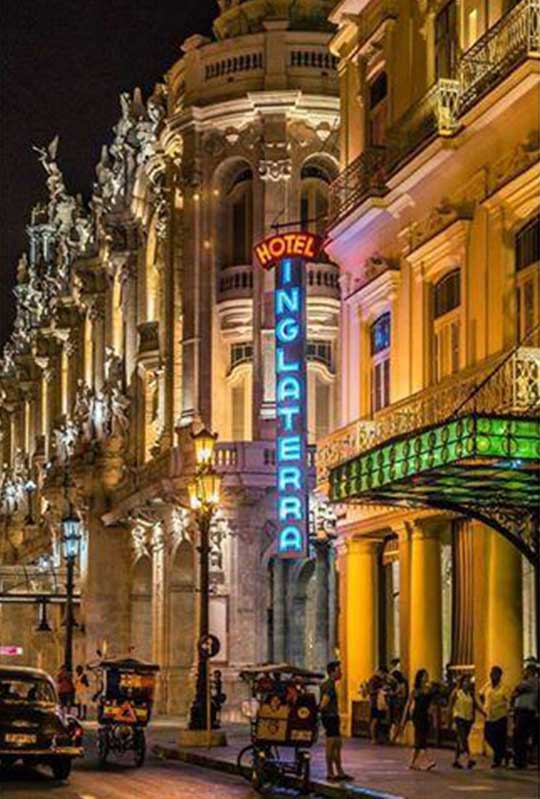 There were mitigating factors: I was jetlagged and the sun had set while I checked in and unpacked. But walking out into central Havana was like entering the film set of a collaboration between David Lynch, Orson Welles and Benicio del Toro. An oppressive twilight heat seemed unchanged from when the city had been under full sun. The square I crossed to commence a random stroll was thronged with women, all dressed up but seemingly with nowhere to go. They all affected various levels of elegance, some a bit tatty around the edges, and they all seemed interested in me. Once they heard my Spanish, it became a continuing unfinished conversation with them as I strolled, as if they were all one and the same person; all vague “Where are you going, handsome?” type stuff, and it quickly dawned on me that they were jineteras – the cool-sounding Cuban word for prostitutes (the word means ‘jockeys’, to infer that they ride the tourists like horses).
I was more in the mood for a beer than what these ladies of the night had to offer, and managed to dodge past them all into the first bar I saw. It was on the ground floor of another hotel, for Havana doesn’t really have bars in the sense that we would understand. It has two types of drinking establishment: swish upmarket joints for tourists, where the only Cubans allowed are the staff, and scary holes in walls for the locals, where the only tourists allowed are the very brave ones. Most of the drinking was taking place on the street from plastic bottles of Coke, presumably topped up with rum. I returned to the hotel, realizing it would take some time to adjust to this strange place.
It would take my first meeting with an expat Habanera on the following day to discover the sort of bar I’d had in mind during the plane journey, and it didn’t disappoint. My contact was a journalist who had lived in Havana for three years, and she took me to Dos Hermanos. It was the middle of the afternoon, searing heat bearing down on all of Havana, and we parted the heavy velvet curtains in the bar’s doorway and entered the scene of another film. In this one, Stanley Kubrick had taken the director’s chair. The bar was long, zinc-topped and empty of customers, the white-liveried staff standing to attention with a weary air, adjusting the tea towels draped over their arms. 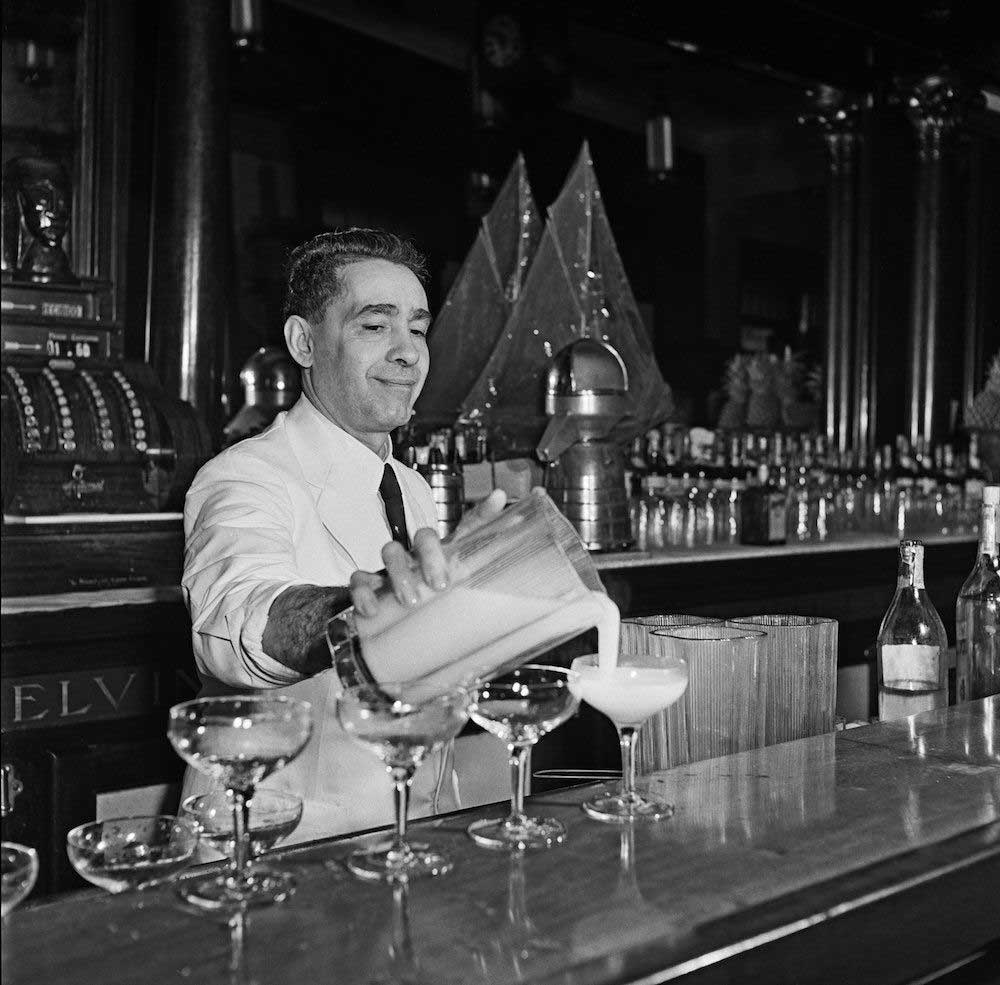 We were the only customers and it was clear why – this place was a relic; the fossil of another world long destroyed by Fidel Castro’s revolution. It spoke of the speakeasies of the Batista regime, when American gangsters and their molls dominated Havana and turned it into a playground of vice. Not any more. There was nothing to do but sink a few mojitos and feel trapped in a timeless zone. My contact filled me in on the current “Special Period” in Cuba, brought about by declining trade in sugar cane and the continuing US blockade grinding everything to a halt. The Cubans were on rations – a cup of rice, a cup of beans, a handful of coffee and some sugar. Everything else was acquired via the black market. There was a dual economy – US dollars for the tourists and Cuban pesos for the locals. My contact advised me to acquire some pesos if I wanted to see the real Havana. I thought I already had.
My next stop was Santiago de Cuba, the country’s second city and site of a major battle in the revolution on 26th July. I gathered this because every street, building and square seemed to bear the name ‘26 de Julio’. 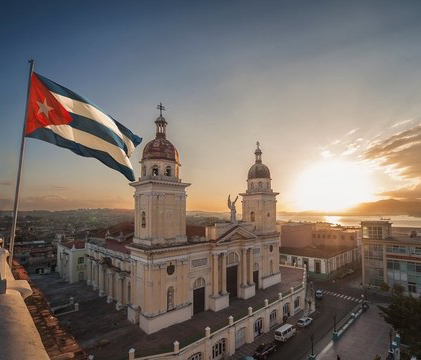 Santiago is not quite as grand as Havana and there are fewer old Chevvies around, but the bullet holes in the municipal buildings give it just as much edge. My second contact was a local chap named Juan, a jovial fellow with an enormous embonpoint; something I came to learn was a sign of wealth in this country of skinny people. Juan was a kind of fixer, who earned money by helping tourists hire cars and visit attractions. His first question to me, as we took beers on the terrace of a hotel bar, was what kind of woman I was after. There is a casual attitude towards sex in Cuba, whose citizens view it as one of the few pleasures, along with dancing and playing music, that cannot be rationed or controlled by the government. It’s quite a shock to the stiff-upper lipped Englishman, who considers such things not to be the subject of conversation with strangers. I drove the talk back to my travel plans: I wanted to see Guantanamo – the town, not the US base – and Baracoa, a tiny resort on the southeastern tip of the island known for its beaches.
The next morning there was a battered old Chrysler waiting outside my hotel, bearing a well-breakfasted looking Juan and a driver. We sped along dusty main roads full of potholes, stopping to admire various tourist attractions. First a Cuban theme park on the outskirts of Santiago, where the theme was ‘faded glory’, like most of Cuba. A few tatty tarpaulins covered defunct enclosures; the only functioning attraction was the dolphin pool, where I swam with a pair of porpoises who at least weren’t living on rations.
We reached Guantanamo, a pleasant little town with the brightly painted houses that typify Cuba. On the way I asked whether a view of the notorious US base was possible, but was told that all the roads around it had been closed. Juan tried to change the subject by telling me that Guantanamo gave its name to the famous Cuban song Guantanamera. I imagined a song emerging from the US base being unlikely. The Hotel Guantanamo was a modest affair, unique in that both Cubans and foreign tourists are allowed to stay there. I fell in with a bunch of locals in the bar. When it got dark, they all announced they were headed to a nightclub, inviting me to join them. We all piled into a fleet of battered old cars and drove for miles and miles along a dead straight dark road, and then after half an hour pulled up in what looked like a council estate. “Where’s the nightclub?” I asked pathetically, on the first of many such experiences in Cuba that made no sense whatsoever.
David Lynch was back in command. We sat around a grim little apartment for a few minutes, drank some ghastly moonshine rum, no-one really saying anything, and before long the cars were revved up and we drove back to the hotel. The nightclub was never mentioned again. I wondered whether it was a botched kidnapping or something, but there was no-one to ask. 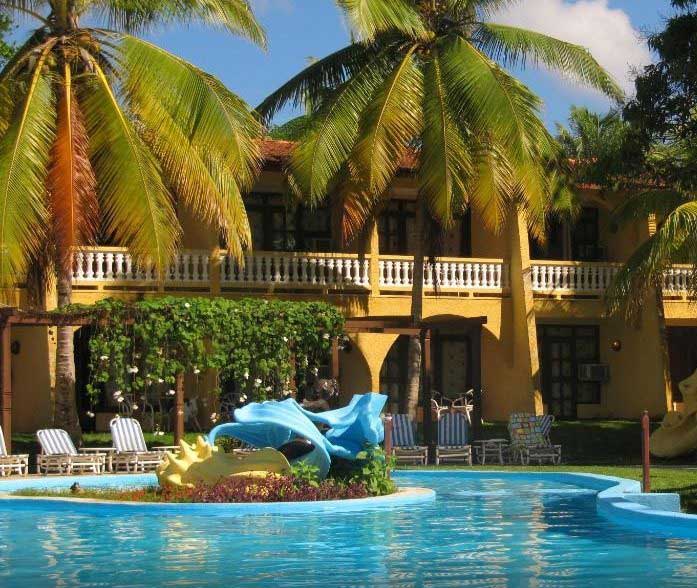 Next stop Baracoa, a stunningly beautiful village bearing a statue to its most distinguished visitor, Christopher Columbus. The great voyager landed here in 1492, en route to discover the New World. He quickly moved on to the Central American mainland, but might have stayed longer had the Hotel Porto Santo existed in 1492. This modest 3-star hotel is wrapped around its own little beach and surrounded by lush palm trees, with a large swimming pool overlooking the beach. The hustle, sweat and jineteras of the city faded quickly away while sipping a daiquiri on the submerged stools by the bar, which allow guests to get drunk without the inconvenience of getting out of the water.
I was keen to escape from the tourist trail and in Baracoa this wasn’t difficult. My Cuban pesos came in handy for buying pork sandwiches from a street stall, and the Cuban hospitality and my Spanish soon led me into Baracoa’s only nightclub. This packed, hot, sweaty little room seemed to contain the entire local population, plus a few sunburned tourists, and not dancing was simply not an option, even for a confirmed bar-leaner like me. Luckily the Cubans are very tolerant of bad dancing, and the lack of space meant no-one noticed my lack of mastery of the salsa steps.
There is not much else to do in Baracoa besides lounge about on the beach all day and, with beaches like these, nothing else springs to mind. The coconut palms arch over your head and the sea is the desired shade of Caribbean crystal. Juan waddled over twice with various offerings, including dinner of grilled turtle at one of the new restaurants opened in people’s homes under government licence. “Isn’t eating turtle illegal?” I asked, watching his eyebrows furrow at that unfamiliar word.
“It tastes a bit like beef,” he replied. By then I was used to the Cuban approach to conversation and played Juan at his own game.
“Would you like one of these pencils?”

There are many ways to save money travelling. One of them is to sling your mighty

@HSBC_HK @Spotify @ApplePodcasts "Every sector is facing unique challenges in responding to the ongoing pandemic, b… https://t.co/RBzsC6VxcW
- Monday Jan 25 - 7:00am

@rightonehere So that's what they've been doing with the extortionate interest they are charging me
- Saturday Jan 23 - 3:44pm

A central hotel that provided a haven for guests during WWII proves
I still find the Eurostar really rather wonderful. You get on a
From the eleventh floor balcony of a hotel overlooking the Pacific Ocean,
On a recent trip to Rajasthan, I discovered that not only does
Paul French, author of City of Devils, takes us on a walking
The Chap uses cookies to improve your experience. We'll assume this is tickety-boo for you, but you can opt-out should you so desire.    ACCEPT    READ MORE
Privacy & Cookies Policy
Necessary Always Enabled
0 £0.00
Go to Top

There are many ways to save money travelling. One of