In the tribal district of Khyber on the Pakistan/Afghan border, moustaches are frowned upon. This is putting it mildly. Lashkar-e-Islam, a militant group allied with the Taliban, regularly terrify bewhiskered men with threat of kidnapping or even death if they persist in cultivating a large lip weasel. Taliban rules on beards are very clear: a man’s beard must be long enough to be gripped in a fist. Moustaches, however, are expected to be ‘neatly-trimmed’, though sizes are less specific. One thing’s for certain though – any man with a moustache large enough to grip in a fist will be hunted down. 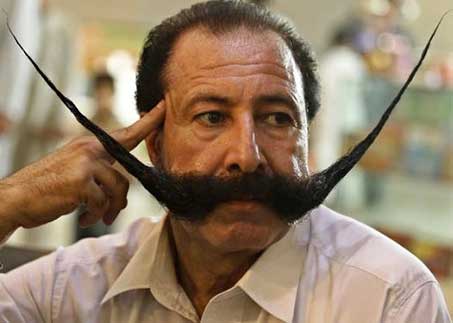 And that’s exactly what happened to Malik Amir Mohammad Khan Afridi. The 53-year-old Pakistani businessman is proud of his 30-inch moustache, which he spends half an hour a day maintaining. Before the Taliban, moustaches were seen as signs of virility and authority on the Indian sub-continent.
In 2009, Lashkar-e-Islam militants demanded protection money of $500 a month from Malik. When he refused, four gunmen kidnapped him and held him prisoner in a cave for a month, only releasing him when he agreed to cut off his moustache. “I was scared they would kill me, so that’s why I sacrificed my moustache,” he said.
Malik fled to relative safety in Peshawar and began to grow back his lip weasel. But as soon as it had reached its previous impressive proportions, he began to receive anonymous telephone calls from people threatening to slit his throat. Malik’s only safe course was to leave Khyber and move to the Punjabi city of Faisalabad, which is not under Taliban control. 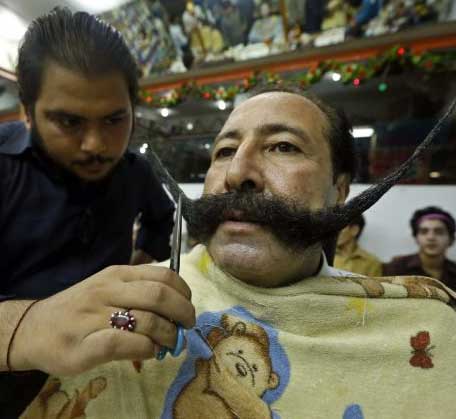 As a gesture of appreciation for his role as a facial hair martyr, The Khyber administration pays Malik a moustache bursary of $50. Men with particularly eye-catching moustaches as seen symbolic of bravery and virility, rewarded as a gesture of defiance to the Taliban. Malik spends the bursary on bars of soap, shampoo, a special beard oil from Dubai, a mirror and a bottle of homemade coconut oil. He massages the oil into his whiskers, twiddles and twirls them in front of the mirror and dries them to stand on end, so the tips reach right over his head.
Gentlemen who are thinking of growing a moustache for Movember should take inspiration from Malik, for whose moustache a lot more is at stake than potential ridicule from one’s office colleagues.

Chris Sullivan looks back at the history of male grooming

Upon receiving an invitation to visit the famed Captain Fawcett