There are few items of clothing more in line with the ideology of Chappishness than the blazer. A three-piece tweed whistle will always serve as a winter staple, but for a single garment that denotes both a sense of old-world savoir-faire and go-to-hell exuberance, only a blazer will suffice.
The origins of the blazer lie with the sport of rowing. Originally, a blazer was defined as a flannel sport coat, unlined, without vents and with easily accessible patch pockets and a striking design in line with the early sporting attire of the time. The primary concept to the blazer was practicality, from the hardy towel-like flannel material, cut for athletic pursuit and to defend from inclement weather, to the bright colours, designed to stand out in the water and aid spectators in determining which crew was which. 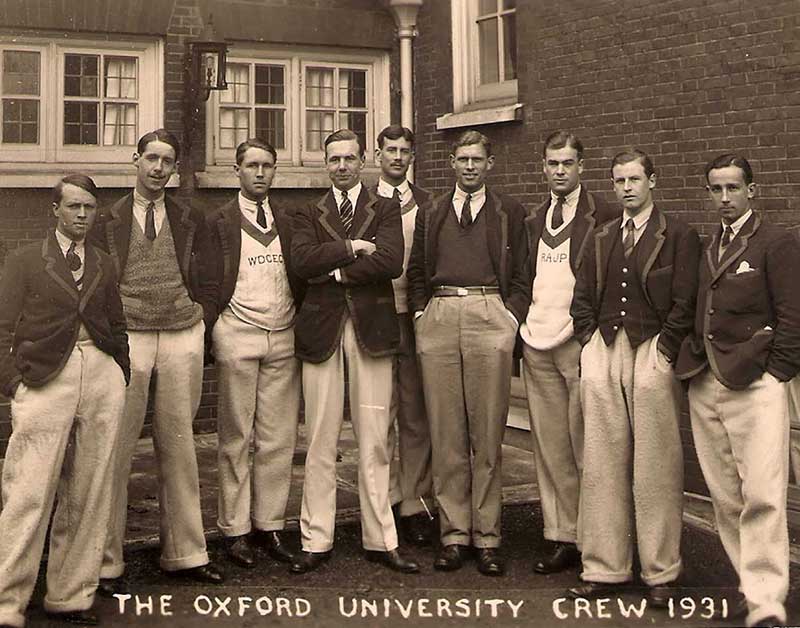 The Oxford-Cambridge races began in 1829, with Henley Regatta following a decade later. The earliest adopted use of the moniker ‘blazer’ was used in reference to the bright red jackets of the Lady Margaret boating club, Cambridge (Est. 1825), discovered in The Cambridge University Almanack & Register from 1852. Oarsmen, infatuated with their hard-earned apparel, began to sport them on land and before long the practice was adopted by cricket, polo and rugby players too. By the 1890s, the blazer was already an integral part of a chap’s daily dress.
An intriguing tradition in Dutch rowing is that blazers are handed down the generations, and as a result are generally quite ill-fitting. Another rule states that a blazer may only be washed when a varsity race is won, and as such, a vast amount are seen stained with river water, sweat and ale. It is this sense of cavalier casualness that made the blazer the “hoodie” of its day, crossing sartorial lines between formal and casual not seen since the Oxford shirt.
The story of the Rowing Blazers brand begins with Dr. Jack Carlson, archaeologist, author, three-time member of the US national rowing team and all-round chap of the highest order. Having won the Henley Royal Regatta and the Head of the Charles Regatta, Jack is also a World Championship bronze medalist and has a Ph.D. in archaeology at Oxford, where he was a Clarendon Scholar. 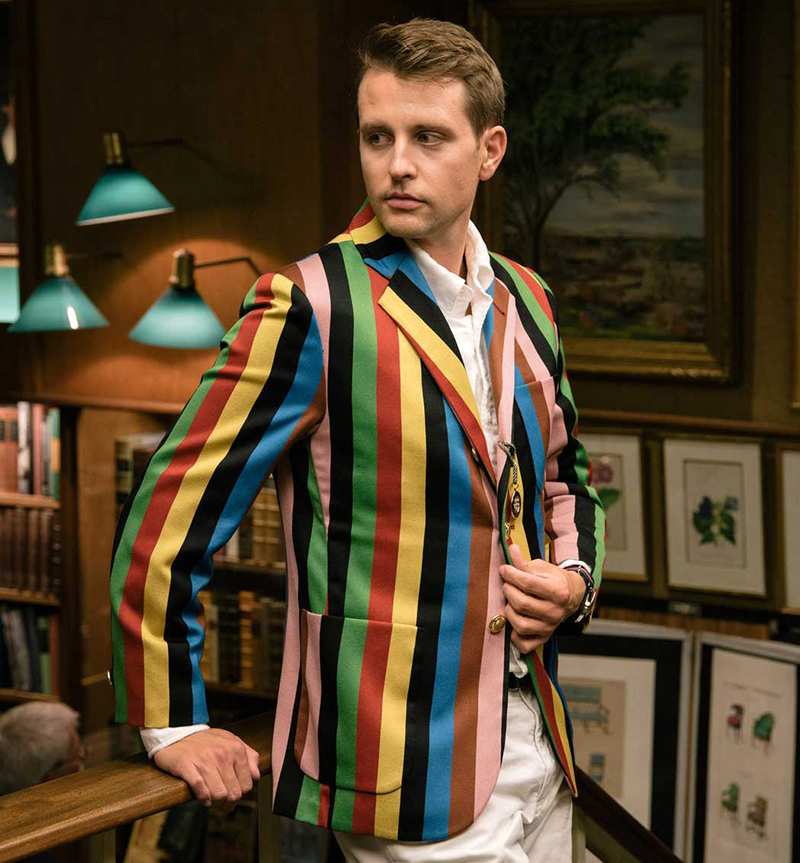 During his time at Oxford, drawing on an obsession with heraldry, vexillology, menswear and academia, Jack wrote the acclaimed tome Rowing Blazers, a celebration of the history and construction details of the jacket he knows down to the last stitch. The chief source of inspiration behind the Rowing Blazers brand is a direct result of the cataloguing of traditions, rituals and myths surrounding rowing culture, alongside heraldic blazonry, sartorial irreverence, cryptic nuance and those-in-the-know homage. All Rowing Blazers’ garments are handmade in New York City, using high quality wool and cotton sourced in Great Britain, Italy, Japan and the United States.
As Jack himself puts it, “Like the court liveries and armorial devices of medieval Europe, the street gang colours of Compton, and the patches and badges of the Hell’s Angels, rowing blazers are tribal totems. They are ceremonial vestments, worn to emphasise both community and difference: to impress, intimidate, and influence.” There is a wealth of idiosyncratic and varied garments to choose from in the Rowing Blazers catalogue, each complimenting the other in a “house style” that reflect a Kennedy-era vivacity and charm, from polo and rugby shirts to belts, scarves, patches and vintage prints, art and general objets d’Americana. 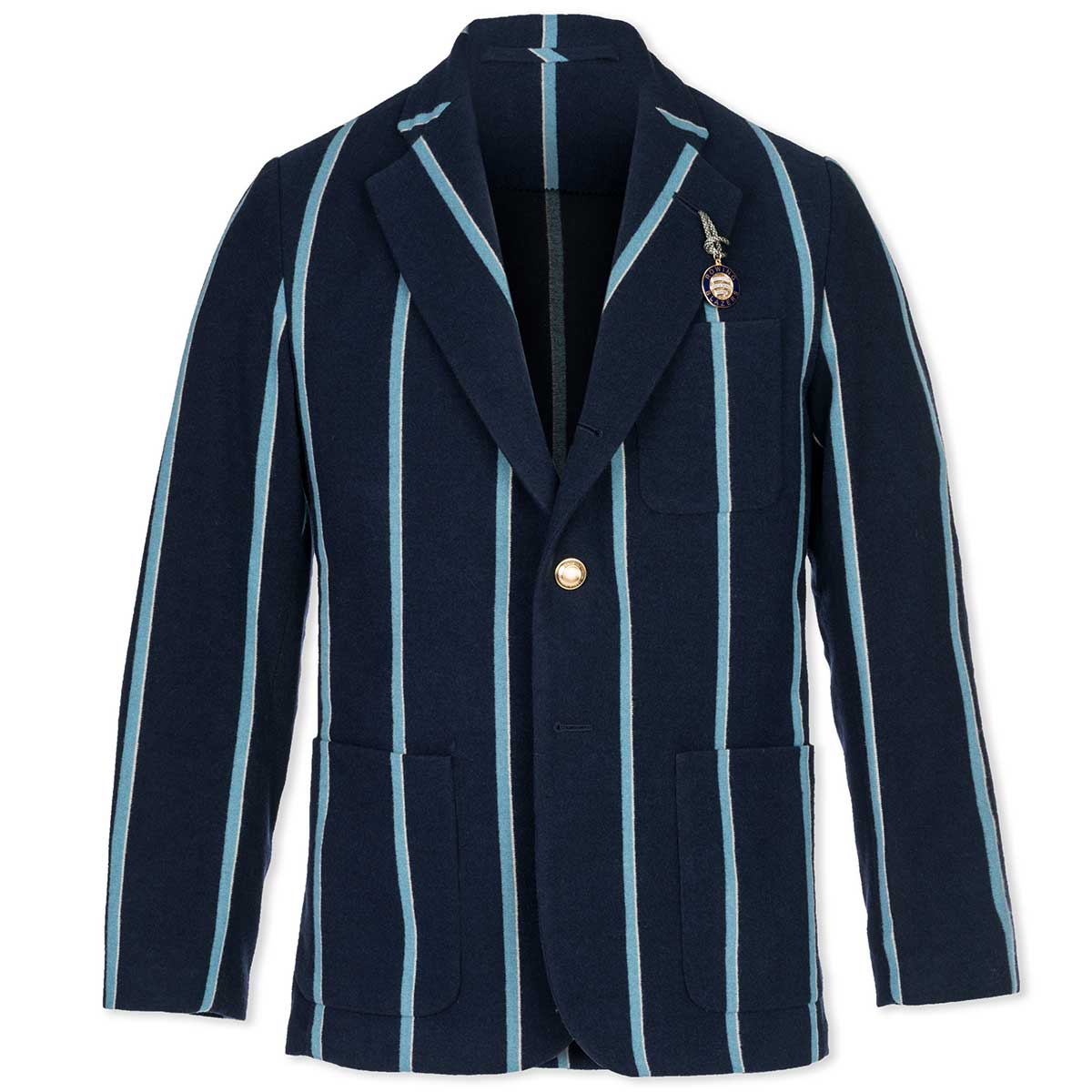 A favourite piece for the Chap has to be the Navy Stripe Blazer; with Baltic blue and cream striping, three patch pockets, single button cuffs and both ventless and unlined, the piece is a bona fide blazer, both athletic in cut and reminiscent of the natural-shoulder loungewear of the 1930s. Constructed from a rugged flannel from a historic Scottish mill comprised of three quarters wool and one quarter cotton, the blazer serves its provenance well, and is equally suitable for cold morning training on the river or the warm confines of the tavern.
In choosing his colours, Jack incorporates the club colours with which he won the Henley Royal Regatta in 2013, and after considering the smorgasbord of vintage blazers collated for his book, chose a stripe width that reflects the authenticity of the garment. The buttoning is something known as a “3-roll-2”, relatively unheard-of except among tailors here in the UK, but especially favoured by clothiers on the other side of the Pond. The 3/2 jacket has a standard three-button closure, but the lapel is pressed to roll directly after the middle button, effectively giving the wearer a choice of either two or three buttons, while still conforming to the “sometimes, always, never” rule of buttoning one’s coat.

The design has its origin at the beginning of the 20th Century, when fashion dictated that three was out and two was in, forcing Ivy League students in their droves to steam their lapels back. The buttonhole left on the lapel is adorned with a handmade cloisonné fob badge inspired by those worn by members of the Leander Club and Stewards’ Enclosure at Henley, designed to hang alongside the brass house buttons, also engraved with the brand’s motto: Destitutus Ventis Remos Adhibe (“If the wind will not serve, take to the oars”).

Latest from The Chap Wears

You know when you get a new pair of brogues, and then
An association between a 1960s blues guitar legend and an English country
It is fitting that a shoemaker founded in 1880 brings out a
A fashion photoshoot at Hornets Kensington is not just people with cameras
A stocking for every occasion? Well, they haven’t yet brought out a
The Chap uses cookies to improve your experience. We'll assume this is tickety-boo for you, but you can opt-out should you so desire.    ACCEPT    READ MORE
Privacy & Cookies Policy