Autobiographies often mark a turning point in the author’s life; the end of their creative output and time to reflect on a career; the opportunity to put scurrilous rumours to rest with the truth; the need to cash in on the dwindling fame of a reality TV show.
The purpose of an autobiography to mark the unmasking of a wrestler whose face and voice have been hidden behind a red and black striped mask for over 50 years is certainly a first, and one unlikely ever to be repeated. Peter Thornley, the man behind the Kendo Nagasaki mask, has never spoken in public, apart from one short interview in 1988 from the back of a car with his muffled voice, behind the mask, transcribed on the screen as subtitles.
Since hanging up his wrestling leotard in 1993, Thornley has not been idle, founding a Zen Buddhist retreat at his stately pile in Staffordshire and forming a charity for war veterans dedicated to murdered soldier Lee Rigby. Now, at the age of 77, he has published his autobiography, choosing this as the moment to remove his mask. 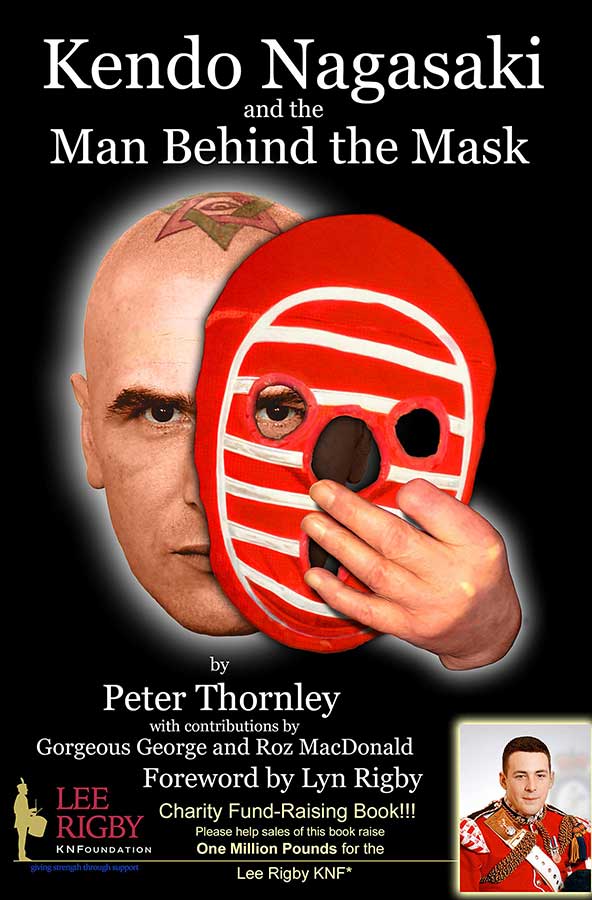 The 500-page book is a rollicking read, commencing in 19th century Crewe with the complicated machinations of Thornley’s adoptive parents and the emotionally barren upbringing that turned him into a fighter. The writing style is strong, natural and engaging, with an eye for the details that matter and bursts of powerful insight. And there are lots of fascinating details. From a man who has kept himself very well hidden for his entire career, retaining a seemingly impossible, post-internet, air of mystery and mysticism, it must have been both satisfying and daunting to know that practically everything in the autobiography would never have been heard before.
There is naturally plenty in the book about wrestling, including technical descriptions of particular bouts, but also the intrigue and skullduggery behind the scenes, in shady promoters’ portakabins in Wigan and primitive, blood-spattered sheds in Wolverhampton where Thornley trained in the 1950s. But just as the reader is beginning to wonder how many more body-crunches and Kamikaze throws they can read about, Thornley swiftly moves on to his discovery of Buddhism through a Japanese judo master. 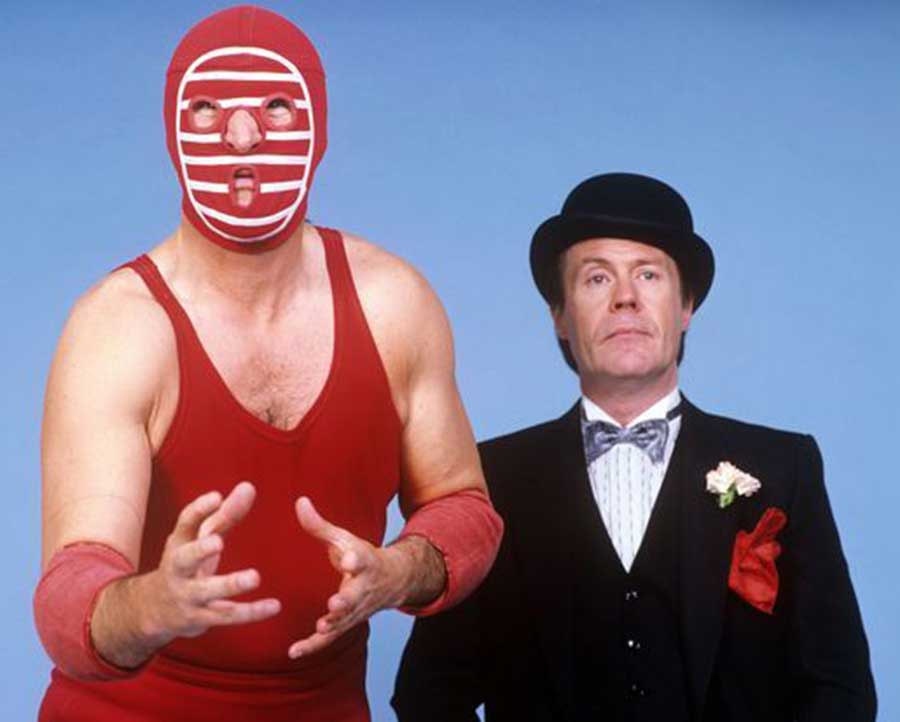 And if that weren’t intriguing enough a development for a hard-nosed adopted boy from Crewe, then ‘Gorgeous’ George Gillette enters the picture, in a Wimpy Bar on the Earls Court Road that during the 1960s was the epicentre of London’s clandestine gay scene. Thornley was a regular too. He announces this startling fact half way through the book, but by then the reader is ready for anything from this fascinating man. 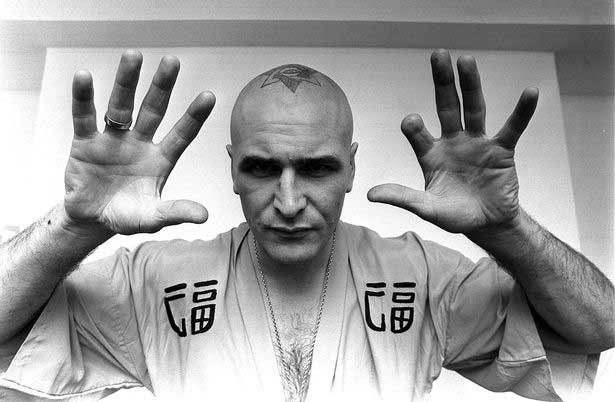 Thornley uses an odd, though entirely successful literary device at this point: he switches to long extracts from Gorgeous George’s unpublished autobiography, to give a flavour of this extraordinary camp and outrageous homosexual who became Kendo Nagasaki’s manager for two decades. George’s flamboyant persona added another layer of intrigue to the wrestler’s already iconic image, always entering the ring in full Japanese Samurai rig, never speaking and never removing the mask (until a ceremonial unmasking in 1977, when the face behind the mask turned out to be just as scary, with a shaved head bearing an occult tattoo and red eyes that seemed to be on fire. Kendo wrestled unmasked for a few years before replacing it without explanation ). Gorgeous George did all the talking, taunting hostile audiences with Polari-infused camp banter, dressed in colourful one-piece jumpsuits and an Afro wig. Anyone reading this book will hope that Thornley, who clearly owns George’s unpublished autobiography, eventually publishes this second well-written document of those extraordinary times.
Thornley’s bisexuality is laid bare in the succeeding chapters, as well as his lucrative sideline in property development, including a gay bar in Blackpool that is today the centre of Blackpool’s Pride parade. Thornley’s shrewd business acumen, spread across luxury car dealerships and hotels, explains another layer to the mystery of the man: how a professional wrestler, even one as successful as Kendo Nagasaki, could end up living in a vast mansion in rural Staffordshire. 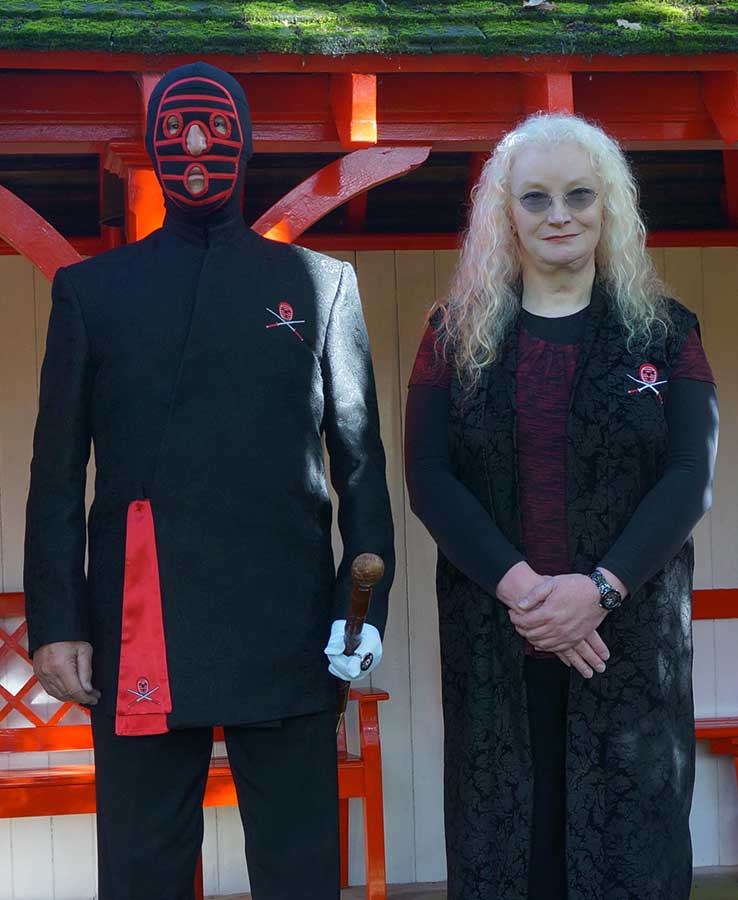 Thornley uses a similar literary device to introduce Roz MacDonald, another of Kendo’s eccentric managers that included South London drummer Lloyd King, who took over after Gorgeous George died of AIDS in 1988. MacDonald became Nagasaki’s manager in 2007 under the name of Atlantis Chronos Goth. Her chapter in the book tells the extraordinary tale her difficult life, and how everything fell into place when she met Kendo Nagasaki.
The autobiography concludes with the forming of the Lee Rigby KN Foundation in converted buildings on Thornley’s estate, and the declaration that all proceeds from the sale of the book will go to the Lee Rigby Foundation, with the aim of raising a million pounds.

Read an interview with Kendo Nagasaki before he was unmasked in issue 83 of The Chap.

I am seated in a dimly lit room on a comfortable white leather cushion, wearing a

Greg Dyke’s BBC dynasty annihilated TV wrestling. Was its TV demise inevitable or was there room

I am seated in a dimly lit room on a