A while back, purely because I was very prominent during the 1980s and ran landmark clubs during the so called New Romantic era, some chump on that social media malarkey would not accept that, at that time, I was not wearing copious amounts of make-up. I, of course defended my corner as, being 6 foot 2 and 14 stone with a noticeably broken nose and a few facial scars to boot, blusher and eyeliner were not entirely ideal. He also said that I must have sported frilly shirts and big shoulder pads. Luckily for us both, I didn’t know where he lived. Yet this is a common misnomer about the 1980s: many pundits who were not there think that that utterly ridiculous portmanteau was de rigueur for anyone who went to any groovy club in the early eighties but, if truth be told, it was anything but. And yet, I don’t blame said inconsequential for assuming such as, the epoch was defined by a few outrageous camp and entirely overt queens who grabbed the limelight, struck a pose at the drop of a hanky and thus tarred us all with the same mascara brush. 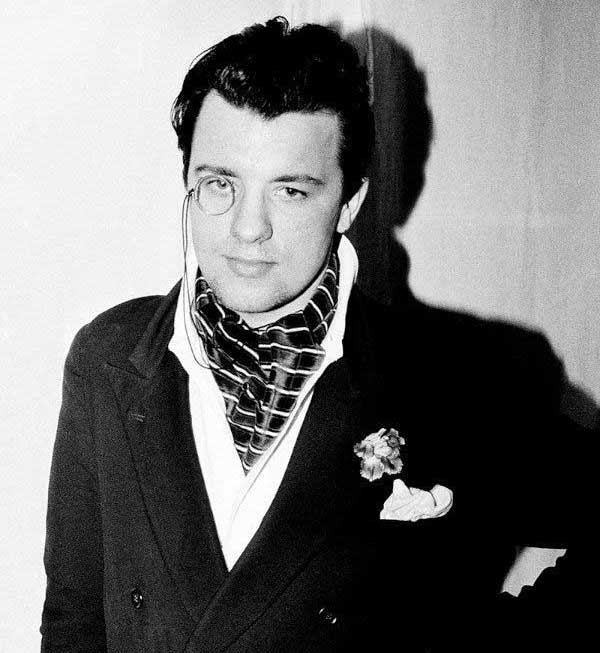 The truth however is that, the likes of yours truly sported a look that was entirely ‘chap’ and had no truck with such ladylike adornment. At times I sported a monocle, jodhpurs, three piece New Edwardian suits, spats and a boater (but not at the same time) and garnered influence from Bertie Wooster, D.W Griffiths, Erich Von Stroheim and Fritz Lang, as well as Robert Mitchum, Yves Tanguy, Frank Lloyd Wright and Whistler. Indeed, I had no time for futurism, as I was still very busy dealing with the past purely because there is so much of it.
I also emulated characters from British comics, throwing in a Desperate Dan or a Buffalo Bill from time to time, and on an off day I will admit to have recreated Plug. In fact, my whole raison d’etre came from a few years previously in 1977 when I and a few friends from Wales – Mark Taylor and Mark Stevenson, who lived in London – were so appalled by the uniformity that punk had become that we embarked on a style dictate we christened Boys Weekly Rockers, whereby we dressed as our favourite characters from British comics like the Hotspur and The Valiant. Of course, taking the Michael 100%, I’d turn up at punk gigs dressed as Biggles in flying jacket and helmet, goggles, breeches and boots, Mark Taylor dressed as Sinbad the sailor in flowing Eastern robes, while Stevenson looked like Dennis The Menace on rather strong LSD. Everyone thought we’d lost the plot.
Fast forward to the Blitz Club in 1979. I still had the kit. I still liked the look. And so I persevered. But what was so useful back then was that, to further my endeavour, all I had to do was visit jumble sales. I’d buy the Ham and High and The Camden Journal and methodically hit every jumble sale in the vicinity. Lest we forget, this was 1979, so much of the mufti had belonged to men who had recently passed away aged, shall we say 75, so the kit was, if you were lucky, from the thirties, possibly postwar and almost definitely from the fifties and sixties. We’d chance upon military wear worn in India during the Raj, duffel coats sported in WW2 and collarless shirts that we’d marry up with stiff starched collars from Denny’s in Soho. On a good day we’d find Huntsman suits, Hawes and Curtis shirts and Lobb footwear, and on a bad day we’d get properly elbowed by old ladies, a prehistoric scone and a cold cup of cha. 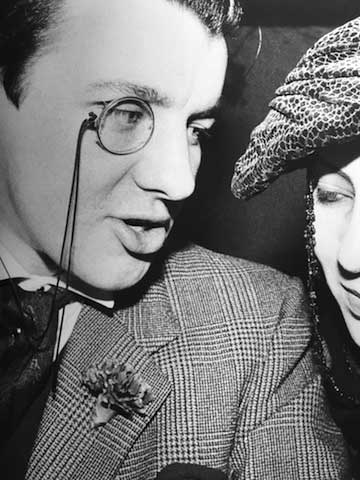 The Blitz club started going downhill, purely because too many blusher and lace types were getting in, dancing like simpletons to electronic music. It was the silly season. My reaction was to start my own night in the St. Moritz, where we played music that was deliberately old and decidedly decadent: Marlene Dietrich, Lotte Lenya, Billie Holiday etc, and it took off. Before you knew it, futurism was dead and looking like a silent movie star wasn’t. I recall two regular patrons who dressed like 17th Century English Puritans and sat nursing their bibles and water all night, while certain ladies dressed 100% Louise Brooks in Pandora’s Box or Theda Bara in La Belle Russe. I was big on the look sported by the King of the underworld played by Gustaf Gründgens in Fritz Lang’s M, which was bowler hat, leather gloves and leather coat.
Then in 1980 I spent the summer in Manhattan and, thoroughly disenchanted with this camp two blokes in make-up behind a synthesizer nonsense, decided to start a big band that used real instruments to play funk and Latin, and designed these big suits that I had made by tailor, Chris Ruocco of Kentish Town. I grew a goatee, pulled out the beret and the pork pie hats and listened to jazz and Latin. Soon I saw a similarity between my suits and zoot suits and, considering that said suit sparked riots and disorder in 1941, decided that I would sport them for the band that I named Blue Rondo a La Turk. A year later I signed a £500,000 deal with Virgin, had a Top 30 record, appeared on the cover of The Face, the NME, Sounds and every other music mag in the country, sparking a nationwide trend for 40s kit and all that went with it, causing Armani to copy it and make himself a fortune.
But films were an even bigger influence for that look, especially after 1982, when VHS recorders became affordable. I checked the likes of Vincente Minnelli’s Cabin in The Sky, Andrew Stone’s Stormy Weather and film noirs like The Glass Key and The Big Combo. Now, not only could you could record great movies, but also you could pause the recording at pivotal moments and check out the kit. You could check whether the jacket had a bi-swing or Bayer back, whether the pants had regular or reverse pleats and so on. Now you could get it 100% correct.
Another big effect on us UK style mongers in the early eighties were the cheap flights to the US of A. I’d fly to LA for a few hundred pounds and pick up hand painted ties for a buck apiece, Pendleton shirts for $5 and Eisenhower jackets for a score. No one wanted them. Now, the supply of large sized classic Californian leisure wear of the early fifties has almost dried up, apart from at huge gatherings like the Rose Bowl where the likes of me almost pass out in delirious excitement. 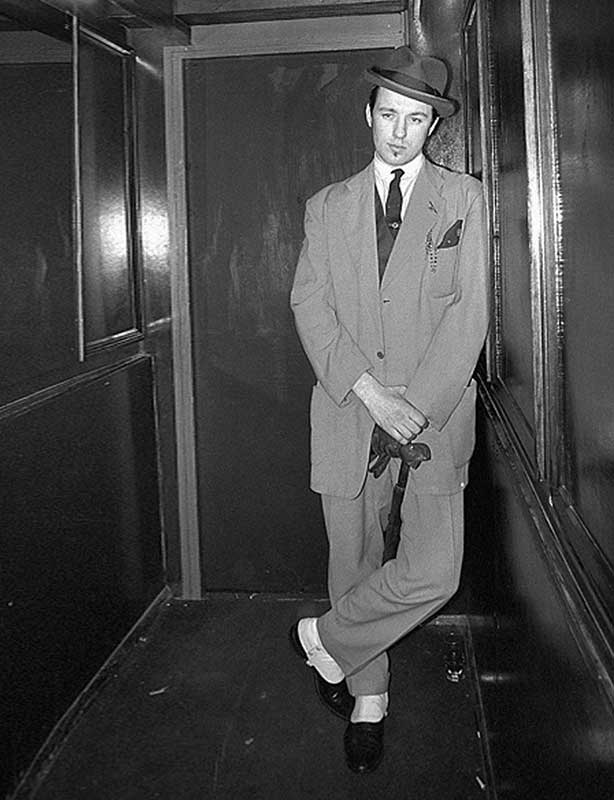 Of course, one always remembers certain occasions when one is dressed to the nines. My favourite was when, in the middle of August 1980, I turned up dressed in a three-piece Edwardian suit, spats, gloves, cravat and walking stick to thoroughly underground gay club The Paradise Garage. The largely black and Hispanic clientele were dressed in shorts and slashed T-shirts, even headbands for goodness’ sake. Thus, dressed as I was, I brought the place to a complete standstill. And then the legendary DJ Larry Levan played Do What you Wanna Do by T Connection and I took to the dance floor, pulled out a selection of my best moves, as perfected in Wigan Casino or the Soul Boy clubs of mid-70s London – fast steps sixteen beats to the bar, eight spins on the run, a back drop, the splits and back up for more absurdly fast footwork. While I was on the verge of a coronary the crowd erupted into applause. Later as I, sweating like Giant Haystacks, sat down to nurse my thumping heart with a fruit juice and a downer, Levan came over with Frankie Knuckles and sat and just looked at me. I could see in their eyes that they thought that someone might have spiked their drink and I was just yet another apparition. Levan, perhaps lost for words, said, “I never knew Sherlock Holmes could dance like that!”
“Never judge a book by its cover,” was my reply but I instantly regretted saying such, as one really should. As Confucius said, at 3.37 am on the 22nd April 502 BC, “There is no greater giveaway than a chap’s kit, and especially his footwear!”
I still carry the torch, wearing the clothes that I always want to wear, and have never felt the need to be either fashionable or trendy. This attitude has stood me in good stead through the years running my club, The Wag, as a style pundit and even now as I lecture at St Martins. As far as clothing is concerned, I have only one motto: ‘To Thine own self be true,’ while Oscar Wilde’s comment “Fashion is a form of ugliness so intolerable that we have to alter it every six months,” still has a place in my soul.

The Overlook Revisited edition anticipates a return to the frolics