“Disposophobics can’t, don’t or won’t make fast value judgments about their ‘stuff’,” says Ron Alford of Disaster Masters, Inc. ‒ a New York-based ‘crisis management’ service specializing in solving anomalous mess. “So their solution for their dilemma is to keep everything. If you put a $5 note, a magazine, a diamond ring and two dozen plastic Chinese food containers on a table and ask a disposophobic to trash two of them, their response would be, ‘I want all of them. It’s really a disease. It starts in the head of the people and manifests by filling their dwelling units to overflow.”

I know many chaps who fall into such a category, but most would be described as Sartorial disposophobics. One of these obsessives is of course your truly. I collect, I accrue, I amass, I accumulate, therefore I am. The existence of this malady has recently been hammered home after I was almost obliged to move from the home I have occupied for some 18 years to a smaller property with one, and not three, bedrooms. For six months I tried to dispose of ‘ things’ failing miserably, and my flat is still crammed with possessions. My ex suffered apoplectic shock each time she entered my office-cum-den. She’d visibly shake among my African carvings, vintage metal wind-up toys, Mad Comics, old phones, vinyl records, stuffed insects, thousands of books and, compelled to retreat faster than the British Army left from Dunkirk, I’d find her hyperventilating outside my door. Job done, says I.

But my ex-wife failed to grasp was that my possessions are me, and in away explain my tastes and obsessions. However, nothing does this job so admirably as my collection of vintage, or as I prefer to say, ‘second hand’ clothing. My obsession was perfectly timed as, just as I started cracking the whip aged 15 or 16, the big thing for us (but certainly not many others apart from super groovy Londoners) was that 1950s and 60s kit (as it was the mid-70s), was in abundance, especially the latter and much of it dead stock. Undeniably it became a sport for us; a deft display of one-upmanship – whoever could source the most authentic mufti in the best condition was King of The Hill. Of course you could easily find items in mint condition in stores such as 20TH Century Box or Acme in the King’s Road, but that was cheating. The game was to find such stuff and pay next to nothing for it.

“Lovely jacket,” one might say to another collector.
“Yes, I picked it up the other week.”
“Great find!”
“I thought so… it cost all of a pound!” He concludes rather glibly. Gong! He wins. And so it went on – this quest to find original items for a song, paying as little one could for one-off quality garments; the exact opposite of todays’ designer ethos. Of course, as one gets older, one’s shape changes; one puts on weight and much of one’s wardrobe becomes obsolete. But I still can’t throw stuff away. I have 30-inch waist peg trousers from both Acme and Let it Rock, while my current girth runs to 38. I have original 1940s Hawaiian shirts sized medium when I am XL. Others who suffer the same malady offer an explanation. 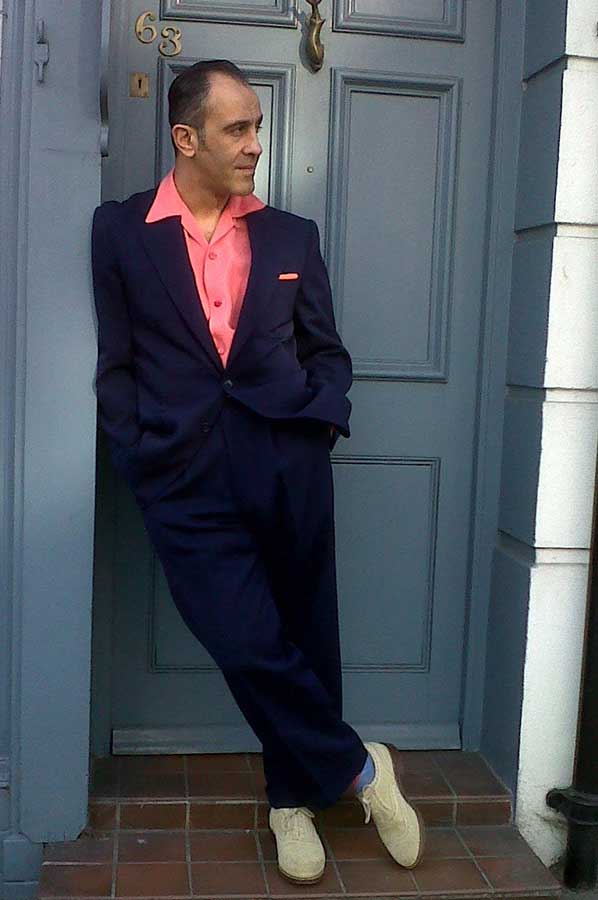 “Because most of my clothes are second hand/newly christened vintage,” chuckles Christos Tolera, who own perhaps the finest vintage clothes collection in London, “it’s very hard if not impossible for me to part with them. I tell myself that I will get them copied one day. I have a suit from 1949 that is totally moth-eaten but has the most amazing cut. I have clothes that I can’t wear but have owned for decades, so can’t part with them. I have been trying to put a jacket on eBay for three years, to no avail.” I posed the question: “If you saw a mint condition pair of original 1940s brown and cream buckskin laced loafers that didn’t fit at all, would you be tempted to buy them?” “I have a pair that are way too big and I’m still hoping I will eventually grow into them,” replies Tolera.

I, on the other hand, have shoes that I bought in the seventies and eighties, such as Denson winklepickers and original cream and beige 1930s correspondents that were tight then when I was a size 9, but now, as my arches have dropped and feet spread out (it happens to us all, by the way) and am now a size 10, I still have them. Pshaw pshaw!

“But it all makes sense to me… just not to anyone else,” says Tolera. “I have so many pairs of socks I never wear, usually in a brown-based palette, that are just waiting for the opportunity to be worn. They’ve been waiting for years for me to buy the clothes that I would pair them with, which I suppose is a weird way of going about getting an outfit together. They were just too nice not to buy and definitely too nice to get rid of. I just love and admire the craftsmanship and the cut of vintage clothes, which is so hard to replicate. It is a symptom of a vintage clothing obsession, I will admit. But we are dealing in one-offs here.” 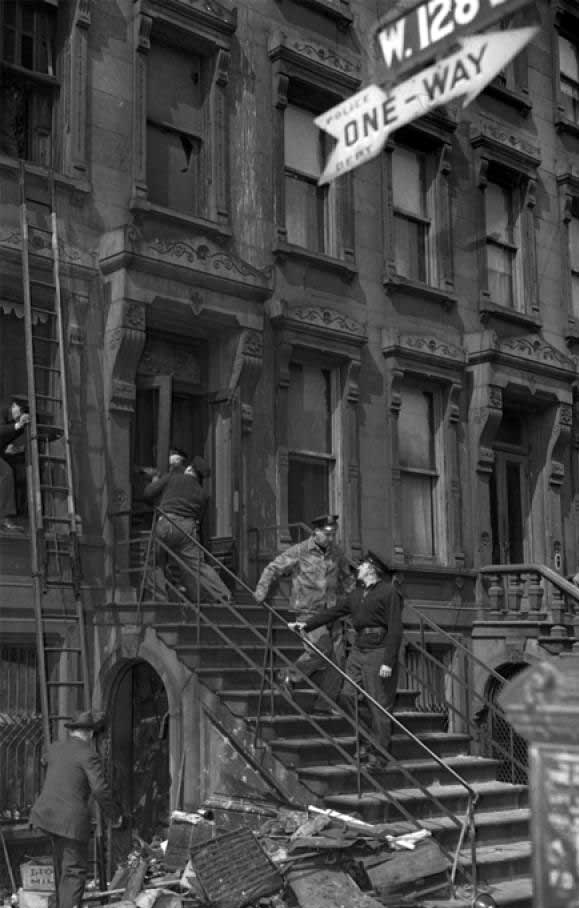 The actual disposophobic disorder was first identified in 1947 and named The Collyer Brothers Syndrome, after its most paradigmatic example. On 21st March, 1947, the 122nd St. Police, investigating a report of a dead body at Harlem’s 2078 Fifth Street Avenue (a four-storey townhouse house inhabited by two elderly, eccentric inhabitants – the reclusive Homer Collyer and his midnight garbage-picker brother, Langley) were forced to batter their way through room after room packed floor to ceiling with junk. This included: 14 grand pianos; the chassis of a Model-T Ford; an array of human medical specimens preserved in a glass jars; a library of thousands of books; an armoury of weapons; the top of a hansom carriage; a primitive X-Ray machine; thousands of newspapers going back to the 1890s; hundreds of metal tins; and bags and bags of old orange peel.

The dwelling itself consisted of an interconnected honeycomb of tunnels, which allowed passage through the junk for those who knew the way but not for those who did not. Eventually, the police found the body of Homer and it wasn’t until three weeks later, after searching through an estimated 137 tons of tat, that on 8th April they found his brother Langley’s’ corpse, under a huge pile of newspapers and tins. He had, in response to repeated burglary attempts (maybe by fellow hoarders) built a succession of booby traps – one of which he fell victim to – while Homer, both blind and paralyzed and totally dependent on Langley, had died of starvation. Subsequently, the house was condemned and razed to the ground, while its contents were sold for a meagre $1,800.

Undoubtedly, in my mind anyway, the journey between hanging onto the classic chassis of a model T and cherishing a pair of 1952 black and white loafers that have never fitted isn’t really that far, though it is something that, unless you live in a mansion, should be addressed. Obviously though, as I endure said condition myself, I am not the best person to tender advice. However, my long-suffering ex-wife, when my wardrobe colonised hers, suggested the following: “First bring two big rubbish bags to each room, one labelled ‘throw away’ and one ‘give away’. Go through all your shit and ask yourself for each and every item: Do I really, really want this? What does it do for me? Will I wear it again and can I live without it?”

I followed her advice and it took me an hour to decide whether I should throw out a brace of used detachable collars, a moth-eaten pair of grey spats and a pair of size 30 herringbone bags from the 1930s given to me by the American millionaire Huntington Hertford. I was so exhausted by such contemplation that I gave up, stuck the box back on a shelf and had a lie down. The Collyer brothers would have been proud. 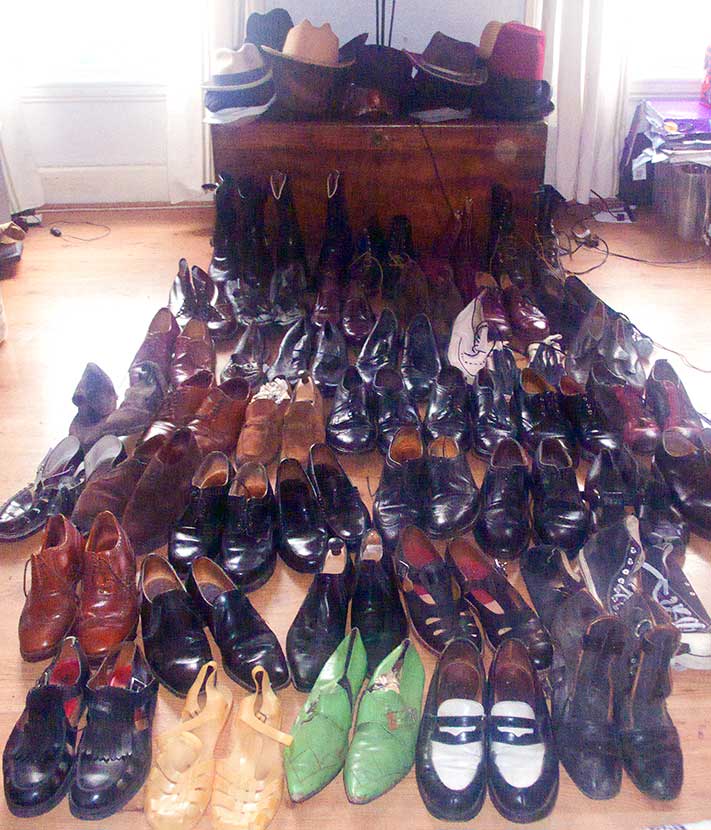 As Christos Tolera concludes, “I would guess that I think about these clothes much more than most, and I value them in a way most people couldn’t comprehend. And I still have the odd clothing holy grail that I am obsessed by and still looking for – The perfect pink gabardine, the perfect collar on a shirt, the perfect pleated back suit, the perfect loafer, the perfect jeans, the perfect belt… The list goes on.”

As for yours truly, I still regret that I gave away a perfect petrol-blue Charlie Chan-style unlined tropical suit from 1947, which I bought from Flip in 1985, because it was a 40 waist and 46 chest and way, way too big. It would have fitted me perfectly now. To this day I still have nightmares about this.

Minerva Miller discusses practical glamour and the lost art of