Panzer Tanks look much more authentic in rivers of mud. The weather had turned dramatically in late July, from the hottest day on record to weather that felt more like 1942 by the fifth and last day of the War and Peace Revival. Visitors to the Hop Farm, Kent were greeted by rivers of mud as soon as they stepped out of their cars, the continuing rain joining in with the efforts of all the displays to create the atmosphere of wartime Britain.
Entrance to the main site is via the fictional village of Trentham, where the Home Front has been brought to life, right down to the very last ration coupon. Land Girls mingle with ARP Wardens while spivs lurk about with contraband chocolate, though the NAAFI hut was not serving tea to the public. In fact, getting a cup of tea to warm the cockles upon arrival proved nearly as difficult as it would have been during the War. 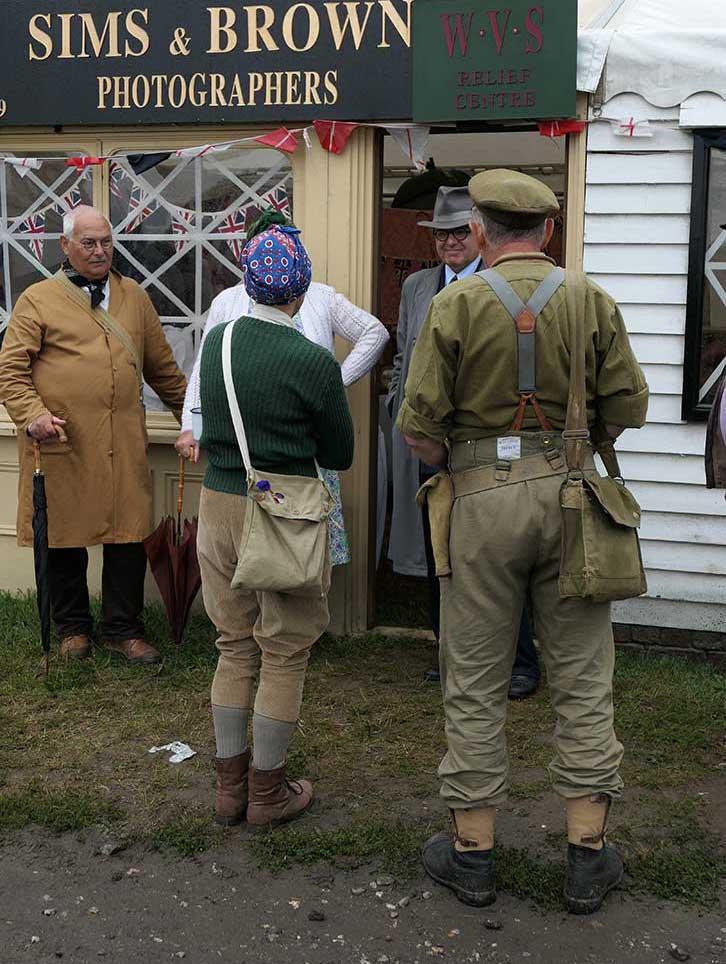 However, by the time we found the public tea tent, we’d been distracted by the delights of the biggest militaria boot sale we’d ever seen. Stall after stall selling guns, ammunition, uniforms, webbing and relics from every battle fought since the Great War. None of the usual boot sale chattels that one has to wade through to find the odd antique; this was wading through a war zone to find even more war, from brass naval buttons to deactivated bazookas. You could easily forget that there is anything else to buy anywhere, and end up decorating your entire house with militaria, which might look quite good if you enjoy living among a dusty shade of brown or green.
With a strong mug of tea under our Sam Browne belts, the plumes of smoke issuing from distant tents lured us towards the living history area, a vast encampment of bivouacs, tents, trenches and men and women re-enacting the regiment of their choice. We spoke to one lady whose grandfather had been a doctor during WWII, so she was representing the medical corps. As she described, in graphic detail, what someone in her uniform would have done during the War, her pronouns elided casually from ‘they’ to ‘we’, as if she really had been on the front 75 years ago. This showed an impressive immersion into her role, a kind of method re-enacting, rather than the ramblings of a fantasist, for it was coupled with a genuine passion and family connection to the period she was depicting.
Then there were the Nazis. When a camera was turned towards them, they set their faces with a steely resolve, as if waiting for abuse; this produced the odd effect of the sort of resigned misery their real counterparts would have displayed, had they been aware of the true outcome of this conflict. Still, they added an air of tense verisimilitude to the displays, and of course they had the smarter uniforms. We gave them a slightly wider berth when wandering near them anyway, just in case, for they were all heavily armed.
We then took our places on the grassy knoll from which one may view the ersatz theatre of war. Battles were being re-enacted with guns firing blanks, in a large hilly field churned with mud, which put the tanks through their paces and sprayed all the soldiers with a convincing spatter of brown. The commentary was purely technical, marvelling at the horsepower of an amphibian vehicle and detailing its specifications. It was like watching an episode of Top Gear from 1939 rather than the staging of a real massacre.
My fellow traveller for the day, John Minns, and I had donned civilian raiment that tipped the nod to the 1939 conflict but also to the weather forecast; i.e. we were not wearing our Sunday best. When we were approached to take part in the Best Dressed pageant later, it dawned on us that the standards of mufti were not generally very high, all the effort having gone into splendidly accurate period uniforms. An encounter with the achingly stylish Eva Leigh and her cohort of vintage pals (who had also been approached for the pageant) confirmed that this was no Twinwood Festival.
But at vintage festivals like Twinwood, one cannot witness an SS Kommandant chewing a burger, while shooting the breeze with a man dressed as General ‘Old Blood and Guts’ Patton. We weren’t quite sure what the ‘Peace’ element was, but at the War and Peace Revival we came away entirely soaked in war, and the terrible weather had made it an even more poignant experience.

“Caught up with RHQ at Enscheide by mid morning. Went down main street to see how

On the 75th anniversary of VE Day, a celebration of

“Caught up with RHQ at Enscheide by mid morning. Went