Men’s grooming brand Urban Jack declares itself to be on a mission to improve men’s skincare. “Every day,” they tell us, “mens’ skin goes into battle with environmental factors, from exhaust fumes to the unpredictable British weather. Throw in a gym session, a park run and one too many late nights, and it’s little wonder about the state men’s skin is in.”
There’s nothing Chaps can do about environmental factors and the British weather, and too many late nights are always worth paying any price for, though naturally we can give gymnasia and park runs a wide berth. And then there is the overriding principle that one’s personal grooming rituals must be approached with as much care and attention as one’s daily wardrobe selection.
With all this in mind, I devoted a week or two to only using Urban Jack grooming products, to see how I fared in this mythical battle with these supposed attacks on the state of my fizzog. The products I sampled were Shower Oil, Face Wash, Shave Serum and Moisturiser. The Beard Oil had no place in my bathroom cabinet, for as readers may have noticed, I am like Jacob in the Book of Genesis, who said to his mother Rebekah, “Behold, Esau my brother is a hairy man and I am a smooth man.” I do have a comrade in charms, however, who is indeed a hairy man, and that hairy man kindly agreed to try out Urban Jack’s Beard Oil (see below). 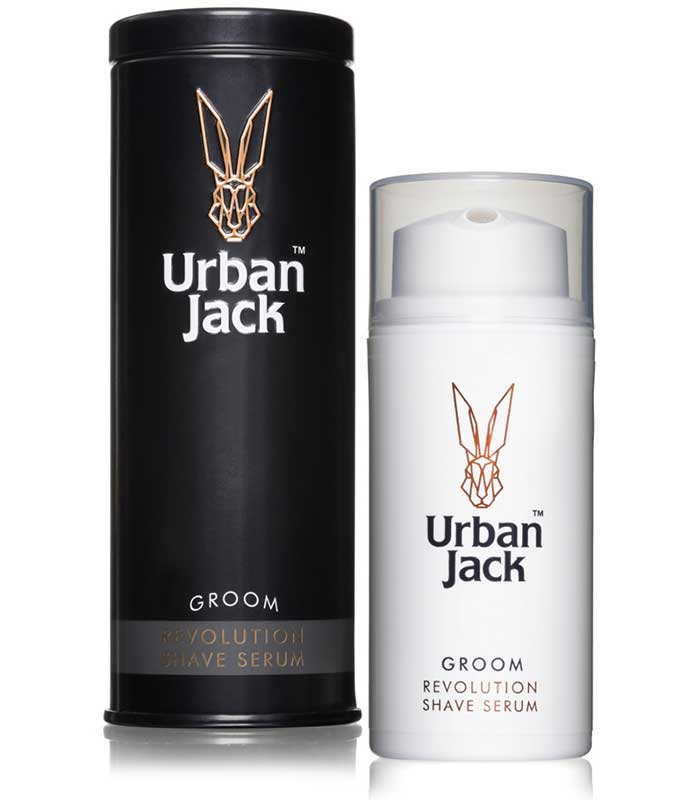 I have always preferred the wooden bowl/hard shaving soap arrangement to the soft shaving cream, which doesn’t come in such attractive bowls that can be refilled with new soaps. We shall not even speak of the stuff that froths out of metal canisters (see ‘savages’, above). Urban Jack’s Revolution Shave Serum promises a much quicker, easier, less messy approach to any of the above. I must say, the notion of conducting a revolution in the bathroom seemed a tad unnecessary, and I hadn’t heard the word ‘serum’ since reading bizarre plots in Tintin books involving mummy curses that required an antidote.
But sometimes, ignoring one’s prejudices and simply getting on with the job in hand can produce surprising results, and that is exactly what happened. Instead of fiddling about with badger-brush and making a mess in the sink, then smearing the face in a Santa beard of froth, the Shave Serum is simply squirted into the palm of the hand then smeared over the chin, previously moistened with a splash of warm water.
The Shave Serum is a thick, clear unguent, requiring only two squirts, so the shave itself is incredibly easy, because you can see exactly what you’re doing. The blade, in my case a traditional safety razor, slid across the usual nooks and crevices with remarkable ease and required de-bristling much less often than when shaving with lather. In fact the bristles seemed miraculously to disappear once removed and the edge of the sink did not gather a small, messy pile of wet iron filings that would need attending to afterwards. This was indeed a revolution in the bathroom!
On my next journey abroad, which happened to be to Jerez, where my ‘hairy brother’ resides, I took the risk of packing only the Shave Serum instead of the usual shaving bowl and brush. Not only did it make the luggage slightly lighter, but also it made shaving in hotter climes slightly easier, the added visibility making for less daunting shaves when in the throes of a sherry hangover.
I shall now hand you over to Paul Lawford, the aforementioned Esau, who will explain the whys and wherefores of Urban Jack’s Beard Oil. 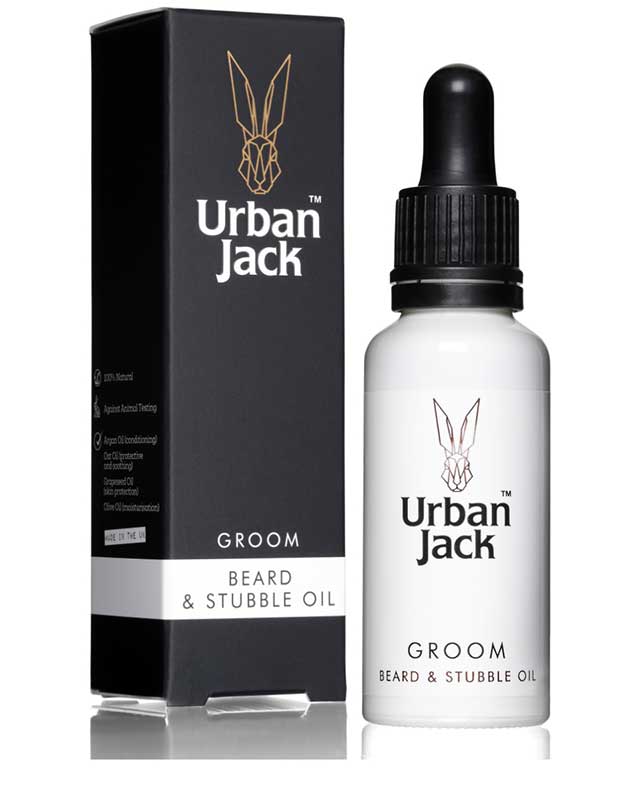 What is it with Jacks and Beards? Lumberjacks often have beards, don’t they? So, there’s Jack Black, Every Man Jack, and Urban Jack all now producing facial hair products. However, the former two Jacks are American, and I am not in America.
Urban Jack is a small UK company manufacturing their facial hair products there. So what is this thing called beard oil, you ask? What’s the big fuss; surely the butter off of one’s morning toast is enough? Billy Childish eats his toast butter-side down, in order not to get the stuff on his extravagant tash. The problem with butter and other foodstuffs is their tendency to turn rancid, and a rancid beard is never welcomed. So what is a man to do? Beard Oil, you cry! This 100% natural product comes in a minimalist black and white glass bottle with a pipet, which is a joy to squeeze. I haven’t used one of these since squirting iodine everywhere at school. How to use? Apply a few drops to your palms, or preferably someone else’s, and rub it into your beard. That’s it; no need for a manual. Personally, I prefer to put a few drops on a fine-toothed comb to apply it, thus avoiding oil on my hands that might lead to the dropping of my breakfast Martini.
The Beard Oil is supposed to condition the facial hair and moisturise the skin beneath it. Does it? In a word, yes. Does it smell gorgeous enough for me? Well it has a parfum of natural ingredients but they are not listed anywhere; like most scents they are a bit of a secret. Can I describe it? I would say the overriding notes are Eucalyptus, Fine Wood Polish and Cloves. I remember using clove oil on a toothache, probably around 1890. However, Urban Jack does warn against ingesting its products, so please do not put it in on a dodgy molar. To summarize, if you want to avoid the brittle follicles and an appearance resembling Worzel Gummidge, I highly recommend you give Urban Jack Beard Oil a try.

A short videogramme showcasing the splendid contents of our latest edition, available now in all good

Paolo Sorrentino’s autobiographical new film reviewed by Gustav Temple. Diego Maradona appears
The new edition sets off on a voyage around the globe via
Present a chum or relative with a subscription to The Chap for
Gustav Temple reviews Edgar Wright’s new psychological thriller set in the swinging
CHAP Autumn 21 has sparks flying, sea monsters rearing and men lounging
The Chap uses cookies to improve your experience. We'll assume this is tickety-boo for you, but you can opt-out should you so desire.    ACCEPT    READ MORE
Privacy & Cookies Policy

A short videogramme showcasing the splendid contents of our latest