Wherever you look in pop culture, you will see signs of our beloved Chap Fashion. Whether you are looking into a far-flung cyberpunk future or back to the romanticised past of fantasy worlds, there are clues and signposts all over the place to the classic influences that brought us here. Why have a few very specific time periods had such a large influence on our huge entertainment industry? Take my hand, oh dapper one, and let us go on a journey of discovery through the history of pop culture to find out.
As a young person, I’m pretty sure that the world didn’t actually exist before colour TV, such is the enormous influence of the media. For the first time, there was media that everyone, no matter who they were or where they came from, could engage with, and the public could not get enough of it. The birth of mass media is the moment when people actively start to tune into the same stories at the same time, and the creators of these stories are able to bring different, new, exciting content to them, things they had never dreamed of. And of course the huge boom in technology and science influenced these stories.
Science Fiction appeared long before the 1920s, when it is seen as beginning. The first real sci-fi book was written 100 years before by a teenage girl, quite literally on a dark and stormy night, and it’s called Frankenstein. This is followed by Jules Verne kind of securing the genre, but the beginning of the 20th century is when the true explosion of science fiction really happens. Comic-books such as Mr SkyGack, From Mars and Buck Rogers, still running to this day, were incredibly popular with all ages, and it’s almost a matter of legend what happened when Orson Wells’ version of War of the Worlds was broadcast – mass chaos took hold of America, with listeners genuinely believing that the aliens were coming to destroy the world. So is it a surprise that the visuals of the early 20th century, the era that birthed it, are so pervasive in science fiction? Not really.
But sci-fi can go beyond simply referencing history – it can be history. Time-travel in all its various forms is a key part of science fiction, from Doctor Who to Star Trek; we see it being used as a plot device to show us all sorts of exciting periods. It allows for period beauty with modern, or futuristic, excitement and drama. The Assassin’s Creed franchise of games utilises this story device better than most, with games that span more of human history than any other. Assassin’s Creed Syndicate and Assassin’s Creed Unity take place in Victorian London and Revolutionary/Napoleonic Paris, allowing you not only to dress in outfits that just make you want to be there, but also getting to run around incredibly recreated versions of these cities in that period. I don’t really want to admit how much time I spent climbing up the Houses of Parliament so that I could see all of London spread beneath me.
If you aren’t into horror games, then you can get your chap on with We Happy Few. An homage to The Prisoner, it is set in a version of Britain where the Second World War devastated the country and people cut themselves off from reality with a drug called Joy to keep them in a state of euphoria. The whole game is set in the swinging 60s, with psychedelia springing from every pore, but behind mod haircut lies a dark secret. Better start running from the bobbies. 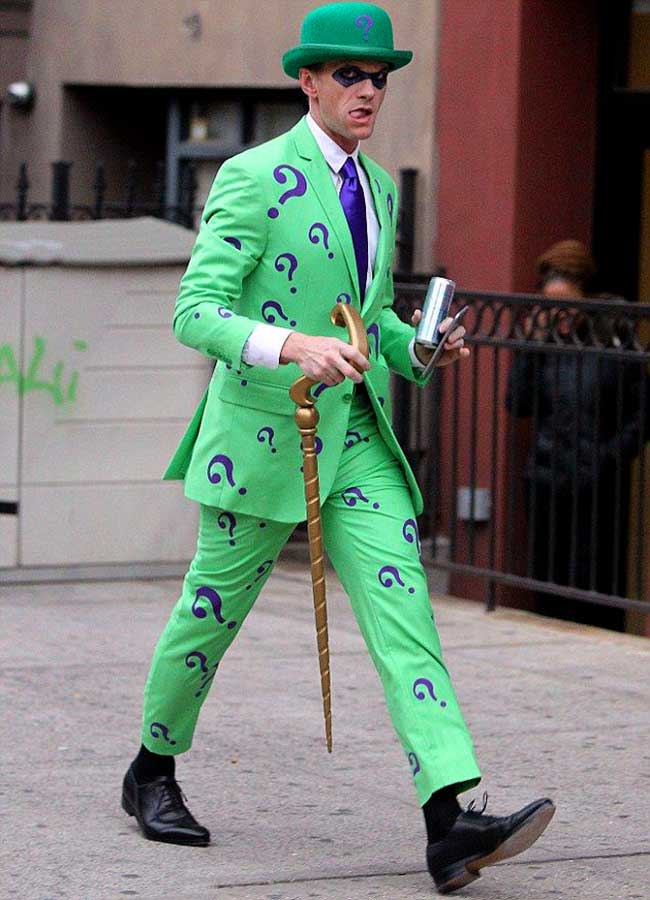 But it’s not just in gaming. Look at any classic pop culture and you see all these clues to where it started, especially if you focus on Western culture. You can’t be a villain in Gotham City if you aren’t wearing the crispest three-piece suit, even if it is covered in question marks. Nor can you run around, looking for the cartoon killer with the annoying rabbit who swears he’s innocent, unless you have your trusty trilby and glass of scotch; and have you ever tried hunting down androids in a neon cybernetic future without a proper trench coat? Sci-fi might have given us a future to put an aesthetic on, but noir and crime fiction gave us a clear-cut aesthetic to put on it.
Noir is one of the larger influences that stamps its big old legacy on present-day pop culture. Indiana Jones, Blade Runner – let’s be honest, most good films with Harrison Ford in them – owe their timeless visual elegance to noir. The grim and gritty, pseudo reality of noir, the seedy underworld of Al Capone, along with the Pinkertons and the general lawlessness surrounding the whole thing, while every single person involved seems to be dressed in clothes so sharp they could cut. Style is substance when it comes to this aesthetic in pop culture. You see references to the books of Raymond Chandler and Dashiell Hammett and the classic films of Hitchcock across the board in to pop culture. Noir is a drug to pop culture, one that it has never gotten over.
The biggest user of this narcotic is DC comics, and Batman specifically. Without noir, Batman just couldn’t exist; every inch of those comics is soaked in cigarette smoke and cheap whisky. And that’s no bad thing. Every bad guy and girl in Gotham is shockingly well dressed, for people who seem to be in and out of prison every week. But would the Joker be as scary if he didn’t ooze with the familiarity of the Zoot Suit? Clearly not, if you look at the reaction to Suicide Squad – anyone who is dressed like a two bit ‘ganstar’ boy with fake gold teeth is not scaring anyone, no matter how dark the alley. 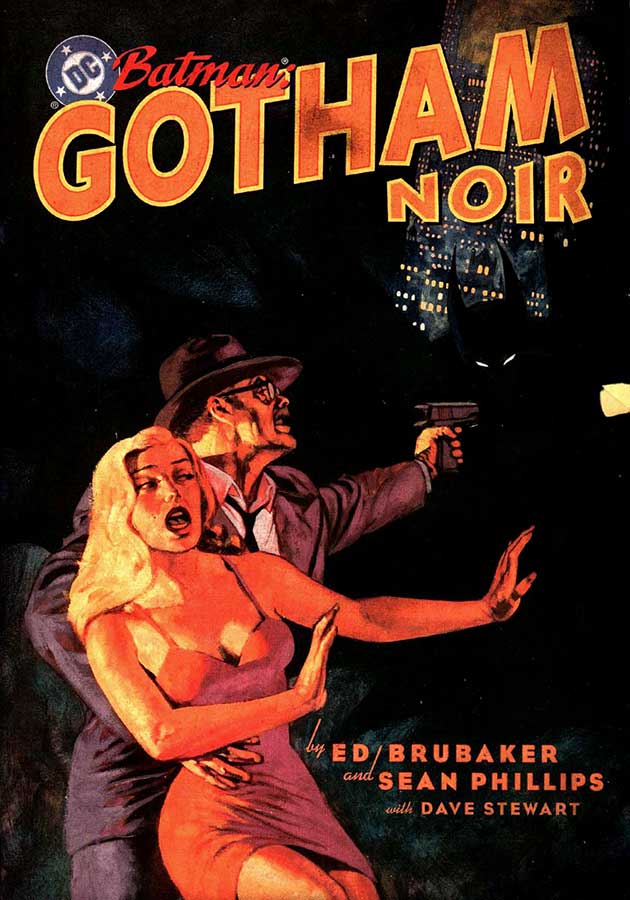 If you take a look at the Gotham TV show, the most recent small screen version of Batman, you can see how it has pulled key elements of the comics, blending all of the classic looks and styles with the more modern aesthetics of its supposed early noughties setting, in a way that is bizarre and totally original, while also drawing in all those familiar 1950s aspects. It builds a world that you can understand and see the fear of noir in, but without shifting it to another period.
Another perfect example of noir being brought up to date with the blending of periods is the most recent iteration of The Chilling Adventures of Sabrina by Netflix. Despite many of us knowing Sabrina: The Teenage Witch from the 90s, this new imagining throws any ideas of fashion mistakes and canned laughter out of the window. Each episode draws more and more from a catalogue of eras in fashion, visuals, tone and story. One minute you could be in a teen drama, the next a Hitchcockian horror, then suddenly you’re flung into storylines that could rival The Crucible for dramatic tension. The Witches of The Church of Night would not look out of place in the cabaret clubs of 1930s Berlin, while the mortal teenagers clash 50s and 60s style with almost 80s vibes.
The use of the vintage aesthetic in these shows is so make the setting and characters timeless. It sets them in their own space that doesn’t have to adhere to the rules of real world history, but without going into all-out fantasy.
So how does fantasy fit into all of this?
I would forgive you for thinking that dragons, elves, wizards and the like don’t really fit into this whole sartorial elegance thesis. I grant you, that there are a lot of robes and tabards going on in fantasy, but let’s focus on the originator of modern fantasy fiction, J.R.R Tolkien’s Middle Earth.
The Lord of the Rings spills from war and loss and comradeship, influenced by the history Tolkien lived through. But unlike the others, Tolkien talks through metaphor and magical escapism, rather than recreating or referencing real history. Instead, what we see are the visuals of that history seeping in architectural reference rather than in sartorial ones.
The worlds of the elves and the dwarves in Middle Earth bring to life the dreams of Art Nouveau and Art Deco in fantastical clarity. The cities of elves are twisting, turning, organic places, blossoming with the easy curves living in perfect balance with nature, just as Art Nouveau was intended to be. This sits in the stark contrast to the Dwarvish citadels, carved from rock and wrought in geometric iron, with great statues designed by straight mathematical lines and looking over them, a core of Deco to the whole thing. When Tolkien, and later illustrators and filmmakers, created these worlds, he placed pieces of realism in them to help the reader connect with it all, while subverting the whole thing to drag you out of the real world. It’s really quite clever.
I can’t really talk fantasy without bringing in the boy wizard who changed children’s literature. Harry Potter as a franchise has a lot to answer for in their lack of costume department, however the most recent additions to the franchise have finally started to give these magically inclined folk some sort of dress sense. Personally I would love for them to go even more Chappish with the look of the wizarding world, but no-one can deny that Misters Redmayne and Law wear a good tweed three-piece very well. Dumbledore seems to have ditched his bejewelled gowns for smart grey wools and proper cufflinks, bringing him more inline with the Chap view of a hero. As for Newt Scamander, he really knows how to rock shabby chic, circa 1930.
No matter where popular culture goes it will always have its roots in the period that Chap fashion also has its roots in, and, much like Chap, pop culture doesn’t care about the rules or what other people think. It’s anarchic, chopping and changing, adding and blending to create new visions from old imagery. We will always refer back to those key moments in the past to anchor our ideas, no matter what medium we express those ideas in. We cannot go back in time, but certain things are far too good to leave behind, and the aesthetics that made up the beginning of the 20th century are precisely the things that cannot, and shall not, be left behind.

The lockdown version of table tennis. Without a face mask you really will die https://t.co/d0GxtSLeRY
- Monday Mar 8 - 10:19am

Liam Jefferies meets the doyenne of Stanley Biggs, a menswear company with
Minerva Miller discusses practical glamour and the lost art of mending with
Our erstwhile butler Mr. Bell has moved to the outskirts of Amsterdam
The imminent launch of a brand-new pocket square design sees the restocking
A handy guide to understanding what people are communicating via their choice
The Chap uses cookies to improve your experience. We'll assume this is tickety-boo for you, but you can opt-out should you so desire.    ACCEPT    READ MORE
Privacy & Cookies Policy
Necessary Always Enabled
0 £0.00
Go to Top

The imminent launch of a brand-new pocket square design sees