The City of London doesn’t look much like the set of Blade Runner. It looks more like the set of a Charles Dickens adaptation that ran out of budget and left the builders behind. One of the few parts of the City that looks complete is the Leadenhall Building, around the corner from Leadenhall Market. The two must not be confused (as they were for this poorly coordinated reviewer), for while the latter is a chintzy chainstore mall where city workers dash to guzzle smoothies and chow on sushi, The Leadenhall Building (aka ‘The Cheesegrater’) is a Richard Rogers-built monolith with security guards on the escalators. Very New York indeed, with access to various swish eateries via a glass ‘elevator’.
When the lift gracefully pulls up outside Bob Bob Cité, you really are on the set of Blade Runner. There is not a curve in sight; from every angle, corridors glittering with mirrors and neon lights disorientate you, until a kindly waiter leads you to your table, past the 48,000 polished bolts that hold the walls together. 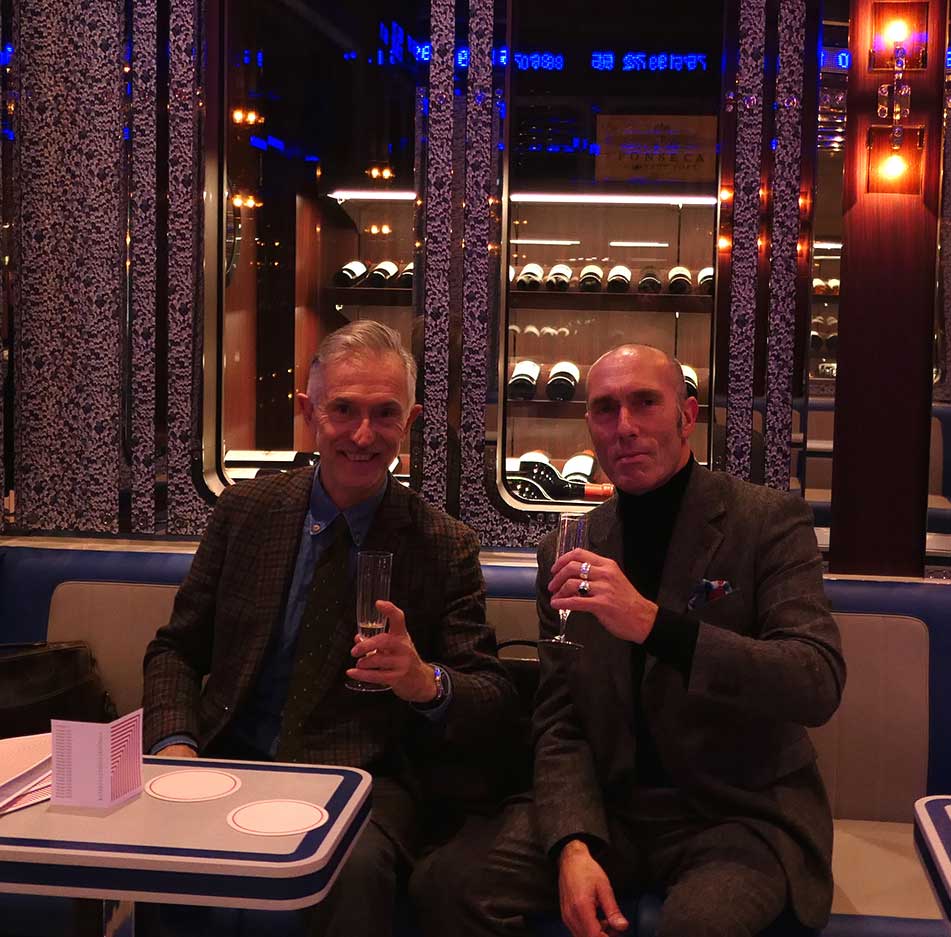 It takes a glass of fizz simply to adapt to the surroundings, and this I did with my dining companion, David Evans of Grey Fox Blog, previously installed. The neon glow around him confirmed that he had already become acclimatized to the sci-fi ambience of the restaurant, and I slid into the blue leather-lined booth opposite him.
All the seating at Bob Bob Cité is in booths, which are redolent of American 50s diners, but ones built aboard the Starship Enterprise. We were both immediately drawn to the glowing button beside the table, wondering whether it started up the jukebox, but the sign said, “Press for champagne.” Some form of technical wizardry connected it to the neon ticker-tape flickering table numbers around the walls, informing the staff who is thirsty for fizz.
The setting, the result of five years, £25 million and 1200 light bulbs, is all very impressive, but what of the bill of fare?
Michelin-starred Frenchman Eric Chavot has stuck to the classics of his nation: French onion soup, Steak Tartare, Escargots en Persillade, throwing in a few Russian flourishes as he did at Bob Bob Ricard in Soho. However, David and I were both drawn, as Englishmen feeling the fresh winter chill outside, to a dish labelled as Boef en Croute, but which was clearly Beef Wellington by any other name.
The waiter informed us, rather dramatically, that there would be a 40-minute construction period for our main course. But with a glass of white Burgundy with our starters – Crab Mayonnaise and Saumon Fume Imperial respectively – plus a bottle of excellent 2014 Chateau de Chambert Malbec to follow, we received this intelligence without panic.
We also had much to discuss, mostly matters sartorial; our timepieces alone required much mutual admiration and discussion. By the time we’d reached the merits of canvassed-construction suitings, Monsieur Chavot had worked his magic in the oven. 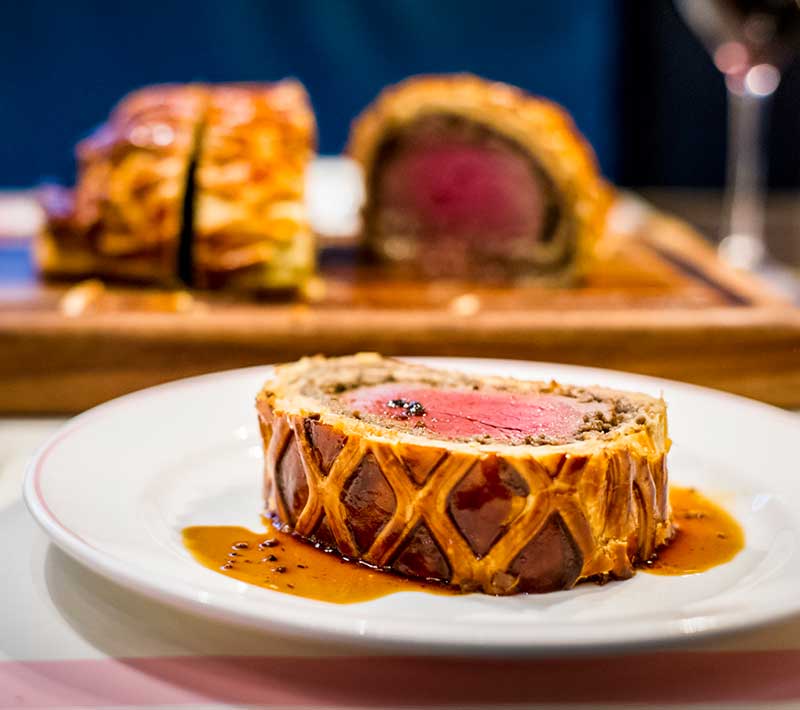 The Beef Wellington was presented whole on a board, a near-perfect sphere of shiny pastry. Once delicately dissected, it revealed a cut of beef cooked to perfection, clad in its insulating lining of wafer-thin fat.
The gravy was hardly necessary, though added an extra touch of meaty moisture to an already succulent interior. We both agreed that this was by far the most superior Beef Wellington we had ever tasted, and I for one have had the famed version at Simpsons in the Strand. David claims his wife is something of an expert at this difficult British dish, so he was the one going out on a limb by praising The Chavot Version.
Portions were more than generous; even having had our fill with two decent cuts, there was still a third of Beef Wellington left on the board, which we did our best to terminate. Yes, pudding was in the offing, but to have left one crumb of this masterpiece would have been a dereliction of duty and an insult to the talented Eric.
For pudding, David chose a Gratin des Fruits Rouges, whose subtitle referred to ‘grilled berries’; curiosity itself drew one to this bizarre notion. I chose a Pot de Crème A La Pistache Et Chocolate, purely to practice my French and because I like surprises and it had something named ‘streusel’ in it. The dish came in a tall glass with layers of pistachio cream and fruit, providing a light excavation to a sublime chocolate mousse at the bottom.
It was an effort to lift ourselves from our leather banquettes, but Restaurant Manager Alex Pulpito, a handsome youth in a well-cut suit, insisted on showing us around. A second dining room, with red instead of blue leather seats, extends from the mirrored hall, which also gives off to private dining rooms. We were shown how the long sweeping tables, seating 20, curved from the middle to allow conversation to flow throughout. The only minor inconvenience was that diners had to get up from their seats to reach the champagne button.
The restaurant is right opposite both the Lloyds Building and 20 Fenchurch Street, aka the Walkie Talkie. These buildings, with their aggressive modernist glass and steel, themselves form part of the architecture of Bob Bob Cité as well, clamouring for attention through every window, all of which adds to the Blade Runner feel inside.
We both agreed that a visit to Bob Bob Cité was worth it for the architecture alone, but the superb cuisine, with its roots in a sophisticated French country kitchen, provides an even better reason to visit.

This short videogramme by Sophie Gargett gives a tantalising glimpse