When m’learned colleague invited me to join him for a Chinese meal, my first thought was – isn’t at least one of us a little old to be gorging on cut-price fodder ordered in a dank Soho basement by pointing at lurid pictures on a laminated menu, to an oriental chap who makes a virtue of being incredibly unfriendly?
‘Ah, but this is modern Chinese food,’ pointed out my highly gastronomically informed colleague, ‘they even have wine lists now. And the dim sum come in different colours.’ Naturally I assented immediately and prepared to be bowled over by our next foray into the world of contemporary fine dining.
We meet at the sort of Borough watering hole that once would have been full of horny-handed sons of toil, wiping their hands on leather aprons while guzzling pints of porter, but today brims with chaps cut from the same cloth but gone up in the world, taking pre-meeting stiffeners and admiring each other’s smartphones. A sign behind us sternly informs us that ‘pleasure’s a sin and sometimes sin’s a pleasure.’ We bemusedly sup our pints and discuss the pressing matters of the day, such as the new season of The Crown and whether the new Tesla Cybertruck is indeed the ugliest car ever constructed. ‘So where is this Baoziinn and why isn’t it called Ho Lee Fok or some other amusing name?’ I ask m’colleague.
‘Follow me, dear sir, and all shall be revealed.’
A short hop away, we enter a building that bears none of the familiar racks of sticky duck of one’s misspent youth in Soho, but is an altogether more swish, pleasant-looking establishment. Our fellow diners are mostly Chinese, which is always a good sign. We sit down, expectant and famished, and look at the menu. It is long, comprehensive and poses a challenge, even to two trenchermen like us. The central question is one of approach and inclination. Should we order dishes that we are relatively familiar with, to enjoy the Baoziinn experience without trepidation of something nasty in the woodshed? Or should we instead throw restraint to the wind and lose ourselves in the more esoteric corners of the menu? In the end, conservatism wins out, although not entirely. We enjoy the instruction that ‘customers are advised to read and understand the menu carefully’; perhaps unwisely, we see this as a challenge. On a previous visit to the Baoziinn in Soho, my guest and I were more or less told what to order, but here nobody holds our hands; we are on our own. We gulp.
For there is an awful lot on the menu; 68 different dishes, and no desserts or pudding of any kind. (‘Not even for ready money?’) We order what seems likes a gluttonous banquet of food, but in fact turns out to be about right for two, given the reasonably petite portions that most items come in. We begin with some salt and pepper squid, which has a suitable kick to it – the spicing is perfectly done throughout, with nothing too throat-catchingly hot, but a pleasant sense of heat and chilli permeates – before it’s dumpling time. We have erred on the side of caution and order one of the house specialties, the Chengdu jiaozi, which is a kind of soup dumpling, and delicious to boot. And more traditional dim sum appears in the form of a quartet of plump, coloured buns, the legendary ‘bun platter’. There is some good-natured joshing, before Gustav ends up with the green bun (signifying vegetarian) and Alex plumps for the orange variety (the spicy pork.) Both are excellent; honour has been retained. 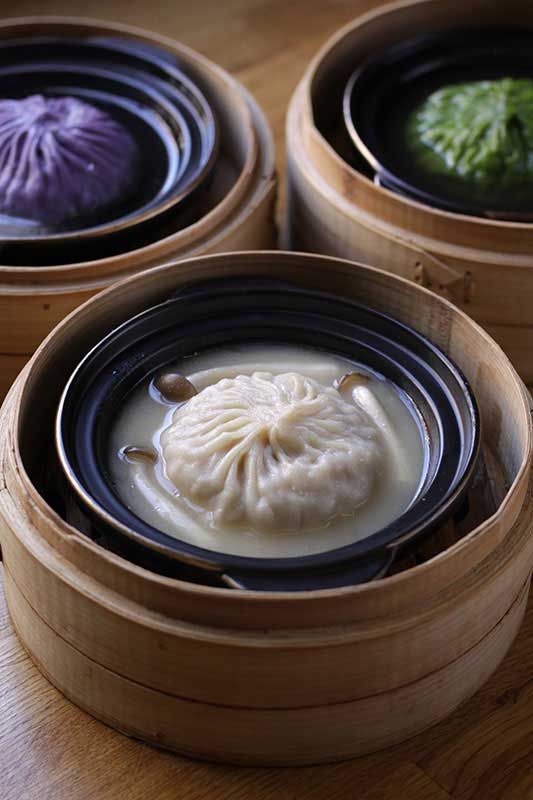 Then it’s time for what could loosely be described as the main courses, although you will be happier if you try and ignore such descriptions and instead think of this as a banquet of sorts. We’d also steer you in the direction of the very fine Chablis, on the short but well-chosen wine list, as it cuts through the heat and fattiness extremely well. This becomes particularly valuable when the next dish, the ‘barbeque roast meat special set’, materialises; we have opted for roast duck, and it comes with pancakes, pickles, melon and the chef’s special sauce. There is an element of DIY construction involved here, which Gustav, predictably, handles better than Alex. It is fantastically delicious, although anything but cheap at £26.90 (the pork is marginally less pricey). And it sets us up nicely for the final main courses, a pleasingly fiery cumin lamb chop and a couple of steamed scallops with XO sauce.
We eat nothing uninteresting or mundane throughout the entirety of our lunch, and the absence of either pudding or an espresso goes entirely unnoticed, aided by a second glass of an excellent Malbec. And so we departed fully convinced that Chinese food has, at Baoziinn, elevated itself to something far greater than its historical reputation. Our next port of call was another ancient Southwark hostelry, the George, where among the Elizabethan columns awaited our post-prandial guest, a literary type, with a pair of pints to top and tail our splendid lunch. He frowned at us upon arrival. ‘Been making merry, have you?’, quoth the senior academic. We glance at one another, conspiratorially. ‘Pleasure’s a sin,’ Gustav announced.
And you can probably guess the rest.

A decade after Sebastian Horsley’s death, Gustav Temple recalls the decadent flash of dandyism that was

A central hotel that provided a haven for guests during