Images of southern Spain, usually composed of matadors, barrels of sherry, women in flamenco dresses and orange trees wilting in the heat, do not commonly include tweed jackets. It’s rarely cold enough in Andalucia to don even a waistcoat, never mind a full tweed ensemble. Yet during the 1930s there emerged, from the royal and aristocratic country set, an Andalucian take on the Hacking Jacket that came to be known as the Teba Jacket.

It was named after the snappily titled Don Carlos Mitjans y Fitz-James Stuart, XXI Conde de Teba y XV Conde de Baños, Grande de España, or Conde de Teba for short, who was a bit of a dandy, a lover of country sports and close chums with the King of Spain, the also rather dandiacal Alfonso XIII. The pair went shooting frequently when Teba was very young, eventually earning himself the nickname ‘Bunting’ from the King, who was impressed with the young dandy’s shooting skills. When the King next visited his Savile Row tailor, he commissioned a suitable jacket for hunting, with the flexibility, pockets and panache required, and then immediately presented the finished product to his pal and named it after him – the Teba Jacket. The Count himself suggested a few modifications, with the result a jacket with distinctly Andalucian qualities setting it apart from its British counterparts. 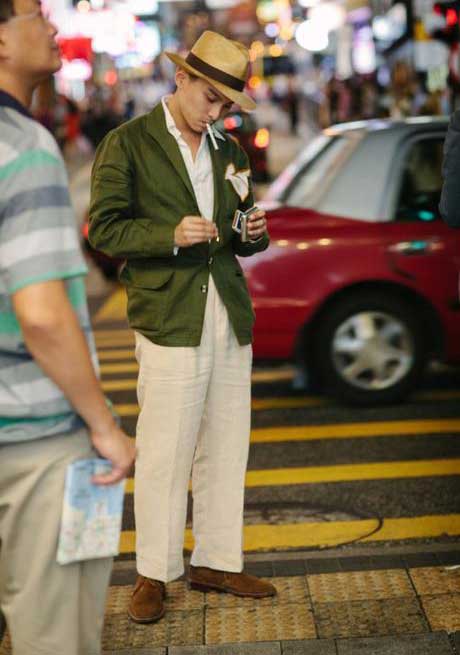 Any visit to Seville, Jerez or Cadiz will reveal a sartorial affinity with the British among Andalucian men; the streets abound with menswear emporia brimming with plus fours, trilbies and hacking jackets. When King Alfonso went into voluntary exile to Rome in 1931, the Teba Jacket also went into exile, only emerging from the dusty cupboards of menswear retailers in the last few decades. Today, one may acquire a Teba Jacket easily in Andalucia, and also in the UK.
Curzon Classics, based in Seville for the last 25 years, manufacture classic British country clothing as well as the Teba Jacket in a multitude of fabrics. Unlike it´s more structured cousins, the Teba has several signature features that set it aside from the rest of the sartorial pack. Half lined and unstructured, the Teba has a soft shoulder silhouette similar to Neapolitan tailoring. It features characteristic un-notched lapels and a four button front. (one should only button the second and third button). Leather or nacar are the buttons of choice. The Teba has no rear vents and its shirt style barrelled cuff offers the option of a formal closed cuff or a more relaxed folded back look.
The Teba pictured above is made from forest green herringbone tweed and is available from www.curzon.es
Flaneur Pocket Square from www.thechap.co.uk

A rainy day in Worthing seemed like the perfect setting