Knightsbridge is the only London Underground station with six consecutive consonants in its name, but this is not the only remarkable aspect of that borough. Once ejected from the tube station into the glittering lee of Harrods, one can be forgiven for thinking one has been accidentally teleported into a Hollywood film with a Christmas setting. One of those rom coms where they only show pretty, shiny people with plenty of money, fussing over their kids outside Macey’s. But the folk taking selfies in front of the enormous Chanel window display are not Jennifer Aniston and Paul Rudd; they are more likely to have as many consecutive consonants in their names as the tube station, because they are mostly Russian or Chinese.
Hot May is tucked away on Beauchamp Place, a street that seems designed, like a film set, to advertise exactly what 21st century Knightsbridge is all about. Lip plumping joints rub shoulders with a multitude of restaurants; one lone peddler of couture djellabas and keffiyehs, probably representing a once flourishing demand, and a mysterious ‘cabaret club’ called ‘Privee’ with its fuscia door slightly ajar. One suspected that merely to push it open would cost you a wad of fifties, so we proceeded to our more modestly priced destination. 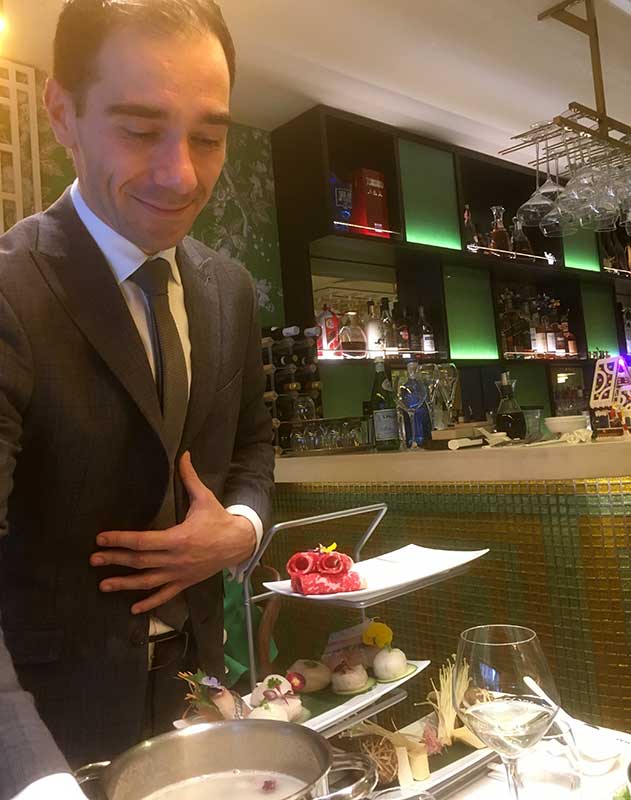 Hot May was opened in late 2019 by Joseph and YuQian Nie, a couple who hail from Northern China. Joseph travelled all over China in search of the perfect hot pot recipes, while his wife YuQian took care of the elegant Chinoiserie décor, which has filled this elegant townhouse with lashings of green wallpaper, lattice panels and studded leather banquettes.
We were attended to by a suave Frenchman who made it his duty, as he undoubtedly does with all his customers, to explain how the whole Chinese Hot Pot thing works. Many cultures have the one-pot dish, putting protein and carbs in a stock. Here, the stock comes in three variations: chicken, ox-tail, or vegetable. For the home cook, stock is normally cooked very slowly so that it remains clear. However, for this hot pot, the ingredients have been blasted at a high heat so that the meat liquefies forming a whiteish bone broth, flavoured with a fig and a goji berry. The broth is warmed at the table. Then, three tiers of protein are brought out on a rack. The top layer is thin slices of Australian Wagyu beef graded according to the marbling, followed by slices of kingfish, a scallop, prawn balls, and a squid ball, and then there are the mushrooms – shitake, enoki and oyster. With David’s counsel, we cooked these in turn in the bone broth.
I’m not sure that boiling gets the best out of beef but it makes the kingfish and scallop sing. The dipping sauces were tame and we would have liked a more robust option, given the way that contemporary diners have taken to sriracha chili sauce. The meal is rounded off with homemade coloured noodles, briefly cooked in the broth, and served with an optional smattering of red chilis. These were the highlight, as each tier of protein is cooked in turn, so the flavor of the broth was enriched, and imparted to the noodles. The ritual of the pot is top and tailed with salads and a wagyu pancake.
Having had our fill, and exhausted from using chopsticks and attending to our boiling broth tureens, we exited in search of the nearest pub. We are used to other parts of London – in fact all other parts of London – where it is difficult to walk more than a few yards without encountering a hostelry. But Knightsbridge has far fewer pubs than consonants and it took a while to locate the Bunch of Grapes. Fortified by a meal that had been as nutritious as it had been generous, we felt we had license to consume as many pints of ale as were available in this surprisingly busy pub. It was reassuring to learn that, even on the set of a Christmas movie, some of the residents of Knightsbridge still find the time to celebrate the British approach to the Season by knocking back a few jars at lunchtime.