For many of us in Britain, our experience of Turkish cuisine has usually been taken while standing on a pavement, perhaps slightly swaying in the recollection of a drop taken, bathed in the neon glow from a sign succinctly reading ‘Kebab’. Those of us who were fortunate enough to have lived in the borough of Stoke Newington in London, before the hipsters colonised it, experienced a more salubrious version of shish, doner and Iskender while seated, often near a table where Gilbert & George tucked into their weekly visit to Mangal II. So when m’learned colleague suggested we sample the Turkish cuisine on offer at Rüya London in Mayfair, I didn’t imagine we’d be doing so while standing up, and I didn’t expect any eccentric bachelor artists to be dining alongside us.
I was correct on both counts, and the food itself was to be a very pleasant surprise. Ruya is situated in the portion of Mayfair that overlooks Hyde Park, reached by diving into a side street tucked between the sorts of car dealerships that James Bond might use. There is also something of the Bond villain’s lair about the interior of the restaurant, with its modernist horizontal chandeliers, and the soft underlighting that sweeps one past various cocktail bars manned by handsome bearded Turks to one’s table. One feels that money has been spent here, wisely and well. A stunningly beautiful Turkish lady on a sofa didn’t look up from her laptop as we sashayed past. She no doubt had a name like Solitaire and would re-enter the plot later. 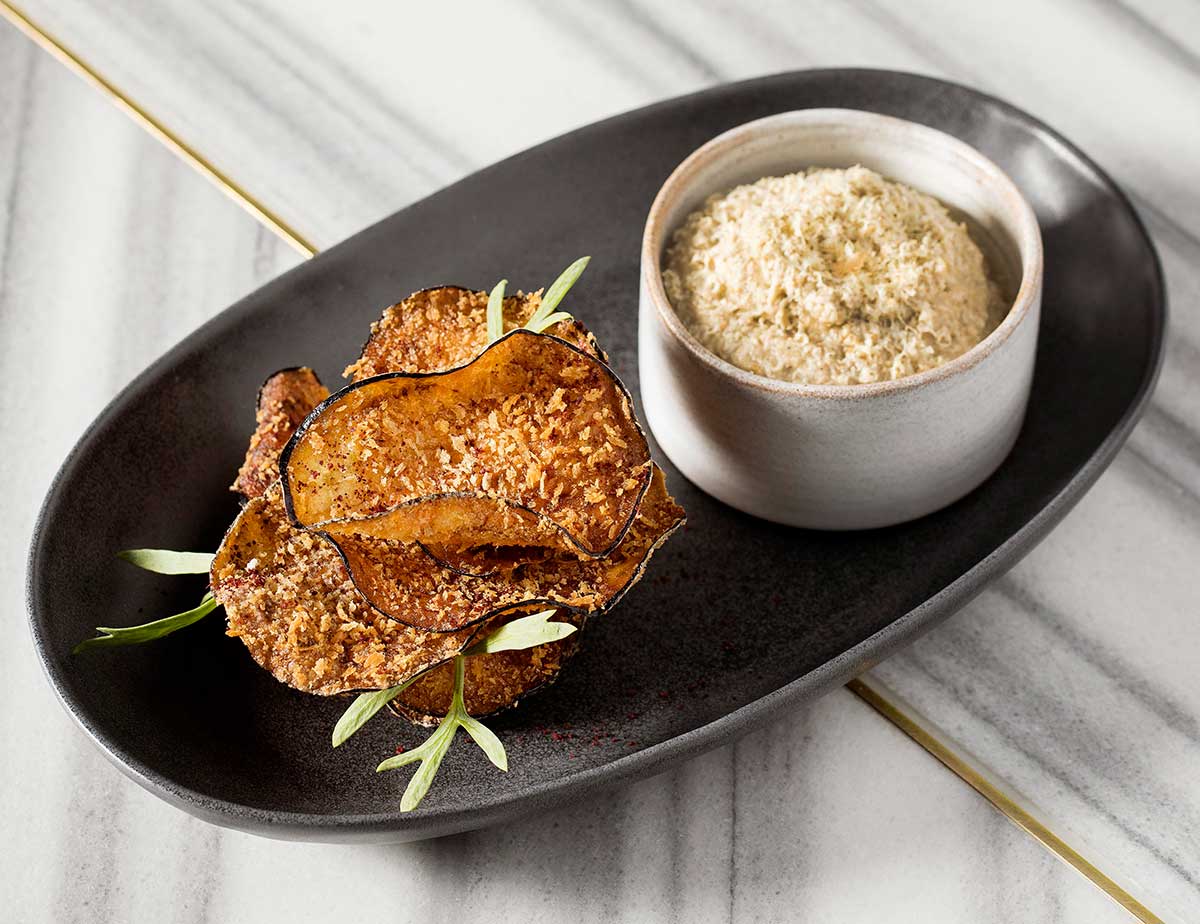 Once seated, we were attended to by a fleet of knowledgeable chaps from the Levant, who introduced us to the parts of the menu that were not familiar, which was most of it. A few words recalled the days of Stoke Newington – Pide (Turkish pizza, but, as we were to discover, sharing practically nothing with its humble Italian cousin); Shish and Adana Kebab (thankfully the word ‘Doner’ didn’t appear anywhere) and the rest of the voluminous menu was entirely uncharted waters.
We began with snacks, which did the appropriate job of whetting the appetite and intriguing our palettes. Filo-wrapped feta cheese was moreish and delicious and vanished in a trice, and aubergine crisps and a dip of its puree went down with aplomb. ‘More! More!’ was the cry, aided by a glass of excellent Sancerre. So we voyaged intrepidly into deeper waters. Lamb manti, a selection of miniature dumplings, was exquisite, and the sucuk pide, a kind of Turkish pizza, showed that the mighty-looking bread oven could make a fine impression. There was octopus on the menu; we ate octopus, and pronounced it good.
Always willing to try new things, we nevertheless must also considered it a necessity to sample tried and tested favourites. The Adana kebab was a very fine thing indeed, combining finely minced lamb with burnt tomato, and the king prawns were perfect, juicy specimens. We enjoyed some triple-cooked chips, every bit as good as those available at certain well-lauded steakhouses, and there was a particular delight in the form of a Turkish spoon salad, which had a surprisingly spicy kick to it. We were also prevailed upon to try a glass of Turkish Grenache-Mourvedre, which we were much taken with; it had a distinctly drinkable quality and seemed an unusual tipple, which pleased us enormously. Service was exemplary, and the whole affair had the quietly satisfying feeling of excellence writ large. 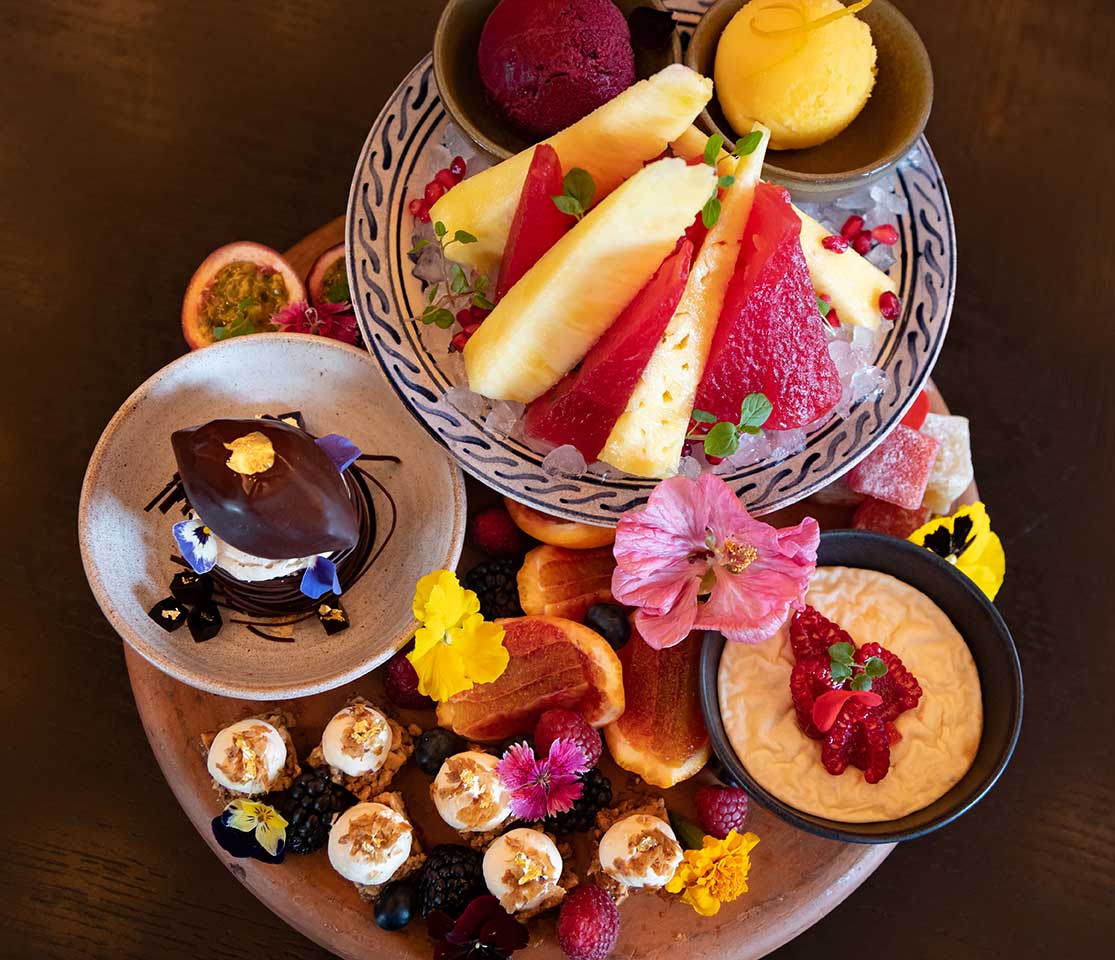 Despite having had our fill and feeling as if we had travelled to Constantinople and back several times via its impressive platters, the word ‘pudding’ nevertheless, once raised by the waiter, could not be ignored, and we selected the Ruya Dessert Platter to share. This was a bountiful selection of sumptuous puddings, including an Anatolian rice pudding and a Çikolata ve Türk Kahvesi, a kind of chocolate bird’s nest steeped in glorious ganache. The selection of exotic fruits that surrounded the various dishes gave the whole platter the air of a final meal offered to 007, before being dispatched by the exotic Turkish lady with the laptop.
But once we had taken the first sip of our delicious espresso martinis, in glasses encrusted with pistachio, we were ready for anything and would have accepted our fate with a wry smile.
Our destiny, it turned out, was simply to settle up, reclaim our outer garments and confront the perpetual drizzle that seemed intent on washing the park away. M’colleague flourished his umbrella rather proudly; I simply dipped the brim of my trilby and somehow we survived the long walk to our hansom carriage.

Post prandials were taken at a hostelry in Victoria that did not conjure up a Bond villain’s lair at all. We were suddenly on the set of a rather drab sitcom about people visiting London who experience disappointment that is isn’t anything like a Richard Curtis movie, or a James Bond movie. However, the exotic flavours of Constantinople had fortified us for this task, and at least we weren’t standing outside spilling salad all over the pavement. We nodded our farewells in the drizzle. ‘We’ll always have Ruya’, one of us said.

Gustav Temple reviews a new steakhouse in the heart of London’s Theatreland.
Gustav Temple and Alexander Larman set foot in a changed world since
Gustav Temple and Alexander Larman grab a final Tier 2 repast before
Monday 16th March 2020 was an auspicious day for a long lunch
Knightsbridge is the only London Underground station with six consecutive consonants in
The Chap uses cookies to improve your experience. We'll assume this is tickety-boo for you, but you can opt-out should you so desire.    ACCEPT    READ MORE
Privacy & Cookies Policy