The day we visit Lord Bath, Longleat is out of season. It’s grey and raining, and even the stone lions dotted around the grounds look miserable. We’re met at the house’s rear entrance by a personal aide to the Right Honourable Marquess (‘ring the white bell marked ‘tradesmen and deliveries’ we were told in our correspondence ahead of time) who tells us to speak up during the interview. “Lord Bath is 76,” he says, “and quite deaf.” We are then led into the building through catacombs of dimly-lit maroon corridors, past spiral staircases and personal chefs. Finally we arrive at a morning room where Thynne the Seventh is sprawled languidly on a sofa consuming the last of his breakfast. On a side table lies a tray decorated with the remnants of eggs-on-toast, a book on Naked Indian Sculpture and a bottle of soy sauce. With a purple flat-cap, bushy white beard and stern educated eyebrows, the Marquess resembles a sort-of beatnik Orson Welles. By his side sits Boudicca the golden labrador, a dog that looks every bit as old as the man himself. 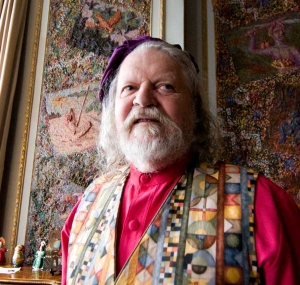 I noticed the Murals coming in. Would you like to talk a bit about your art?
Lord Bath: The murals were really my attempt to document or cover all the interests in my life while painting. There are some that cover subjects like ‘The Ages of Man’, the Kama Sutra or the Disco Mural. Sometimes it would merely be taking subjects like my paranoia and making it into a piece of work so that, hopefully, I’m less paranoid by the end of it.

What are your books about? You’ve written seven in total, have you not?
I feel I should only talk about the ones that were actually published. There were four novels in total. The first one was called The Carry Cot, which was a whodunit around the subject of a baby battering, written at the time my first child was born. Don’t ask me if it’s autobiographical, I might get into difficulties. As well as that I’m writing an autobiography – and that has currently gone to seven million words. My wives say they would divorce me if I go on publishing, however.

What is your attitude to marriage?
I believe it’s important to allow everyone to develop along their own preferred lines; whether that is monogamy, polygamy… any kind of marriage. I strongly believe that if people have inclinations in one direction or other, one should look at how to strengthen those possibilities – not discourage them. I believe there’s been too long a reign of monogamy, when in fact society could be doing far more to find out about individuals and the ways in which we can encourage individual growth, and then to work out how we can all function socially to form a society together. In the future, I would like to get my family together as a wonderful polygamous family unit, but I don’t think I’ll get there sadly.

When did you form these views?
They were forming around the sixties, when I was a young man and wanted to encourage the polygamist in me. I strongly felt I had as much a right to my views as a polyandrous or monogamist did to theirs. Of course, this was during my time as a recluse.

What do you think led to your reclusiveness?
Psychologically, I think I’ve always been prone to looking in on myself, and for a while that became an obsessive interest. There came a date when I realised I was rapidly on my way to becoming a recluse. I was living at Longleat House, seeing less and less of my school chums and my circle was rapidly diminishing. So I went and bought myself a flat in the city. Living life between London and here as a well-to-do young man there was certainly a fair amount of parties and experimentation, being the Sixties, but as an ex-recluse I suppose I was less wildly indulgent than some at the time.

Has modern life led to the demise of the Eccentric?
I prefer to call it Individualist rather than Eccentric, but that is merely a choice of vocabulary. On the contrary, I believe that modern life positively encourages the individual. I’ve never been interested in looking at the blandishments in life. I have my particular interests and, whenever possible, I’ve just gone there. I paint. I write… Less so nowadays, though. I haven’t too many problems in recent years so perhaps my life has become bland.

Today there is very much an aspiration towards a gentrified lifestyle. What do you think has led to that?
Well, I suppose that was one of the things I’ve always been escaping from, never actively seeking out, so I don’t feel I’m the best person to comment on that topic.

What do you think constitutes a gentleman?
Because the word became associated with class consciousness I’ve always tended not to use it, but there are certainly values which underpin the term; the nicer values: courteousness, tolerance… err… err… (he trails off) Perhaps we should leave it on those two. A block of values described as gentlemanliness certainly exists – or existed, although perhaps they are not so much in fashion now for whatever reasons.

Do you feel that your life has been a success?
If you describe success as achievement, I’ve achieved…. Let’s say the murals I’ve painted but it’s not as if they’re recognised as a ‘Must See’ in British art books, but to say that I’ve succeeded would be to suppose that people were aware of myself as a painter and writer of note so I suppose not in that sense. I would hope that continue my painting to the point where that was to happen but I’m now seventy six so it’s hardly likely to happen in my lifetime. I would hope that it would happen… 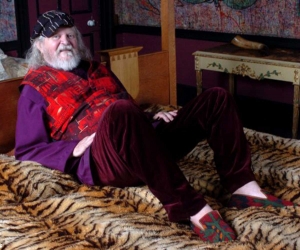 (At this point in the interview the phone rings, and Lord Bath reclines back on his lounger to answer it).

Hello? Where are you? Has it arrived yet? Yes, I’m doing an interview at the moment… The Chap… The Chap! Okay, well come on up then.

(He hangs up the phone, and returns to us)

What would you consider your life’s work?
A seven million word autobiography certainly comes close – perhaps my biggest work, but it’s run close by the painting. There are certain ideas as well that I’ve tried to follow: the Wessex regionalism, pantheism, and the polymorphus society I have tried to further. If someone asks me to fill in a form and I have to write what I do I put writer, or – perhaps – landowner, but I prefer writer and painter.

At this point Boudicca, who has resembled a statue for the entire interview, receives a spark of life and springs to the door with a series of barks. Despite loud ‘shushes’ from the seventh Marquess she continues until the door opens. A man, wild-eyed and with a head matted with dreadlocks, enters:
“The DJ’s here for the party,” he begins excitedly.
“Oh, excellent!” Lord Bath says, rubbing his hands together.
“Do you want me to start bringing in the incense from the truck?”
We take this as an opportunity to wrap things up, and are shown out through the same door we came in. Perhaps Lord Bath’s life is not quite as blandified as he makes out…

Images of southern Spain, usually composed of matadors, barrels of sherry, women in flamenco dresses and

RT @Beathhigh: For those champing at the bit for a new Jilly Cooper novel, enjoy these highlights from an obituary in today’s Times. https:…
- Friday Jun 5 - 8:48am

What is the difference between Fino and Manzanilla? Only a visit to the bodegas of @BarbadilloUK in Andalucia can s… https://t.co/SIpIW87FGa
- Friday Jun 5 - 8:45am

Gustav Temple meets the actress who launched her career aged 18 in
On a rain lashed, windswept day in Hove, East Sussex, Vic Reeves
The Hollywood actor Alec Baldwin entered the humble life of The Chap
Gustav Temple meets the star of Peaky Blinders, whose character Aunt Polly
When we last interviewed you in 2017, the idea of a Stray
The Chap uses cookies to improve your experience. We'll assume this is tickety-boo for you, but you can opt-out should you so desire.    ACCEPT    READ MORE
Privacy & Cookies Policy
Necessary Always Enabled
0 £0.00
Go to Top

On the 75th anniversary of VE Day, a celebration of

Images of southern Spain, usually composed of matadors, barrels of