Upon receiving an invitation to visit the famed Captain Fawcett factory of all things hirsute in Norfolk, my first concerns were sartorial. Would such a visit require the donning of white coats, plastic sunglasses and special safety equipment and, most importantly, would I be permitted to smoke my pipe?
I buried these deep concerns for the 3-hour drive from Chap HQ, having secured a billet at the Dragonfly Hotel, situated a stone’s throw from Fawcett HQ in King’s Lynn. This was my first ever visit to the mediaeval city known for its prime role in the Hanseatic League of Ports of the 15th Century and its history of priestly guilds, and I was prepared, upon arrival, to nose my jalopy along narrow cobbled streets lit by gas lamps.
Instead, the vehicle did a lot of nosing around various sprawling roundabouts until I located the exit for the industrial estate that houses both Captain Fawcett and my accommodation for the night.
However, this was no time for gentle tourism. I was here on a mission to create a new moustache wax with mine host, known as Captain Fawcett’s Right Hand Man (RHM), and there was much to be done.
The factory is amusingly, and perhaps intentionally, situated a few units along from a wholesaler of erotic wares, and I was glad not to have accidentally stumbled in there asking for lip weasel lubrication and gentlemen’s accouterments. The unit housing Captain Fawcett is a cut above the rest, with a sparkling original red telephone box at its entrance. The wide doors usher one into a vast edifice crammed to bursting with hirsute paraphernalia (see The Chap 102), vintage motorcycles, a bar and several Chesterfield sofas. 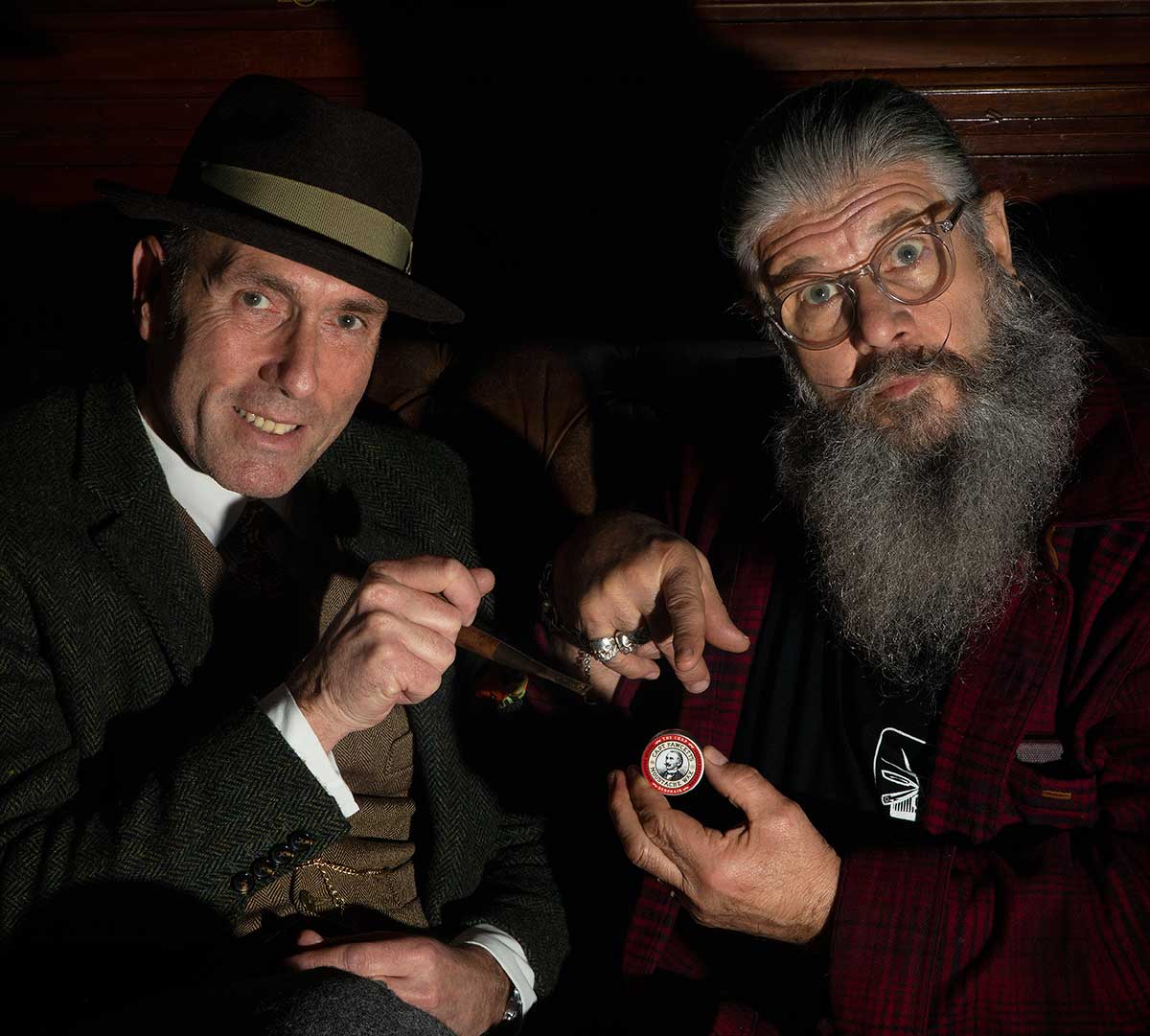 Captain Fawcett’s RHM gave an effusive and loud greeting, once I’d been granted ingress by one of his many factota. The place was crawling with staff, from brisk admin ladies to white-coated laboratory technicians; it was much like being in a Pathe News clip about factories from the 1940s. A brief tour of the premises revealed that, as well as the immense volumes of barbershop accouterments published in the previous issue, there were also suites of wood-pannelled offices, warehouses and a sleek white laboratory, where all the Captain Fawcett unguents are made.
The mission was to create Debonair, a new moustache wax for The Chap. The ingredients had previously been discussed, my simple brief being that it should smell of pipe tobacco, leather armchairs and whisky. This was more or less precisely the aroma that wafted from the first tin I was shown. The wax itself is made in a machine that looks like it could make anything – shampoo, engine lubricant, marshmallows. When the RHM invited me to take a closer look, my worst fears were founded when he produced a white coat and the sort of woven white trilby that butchers used to wear. With the strict edict that I was not to be photographed in this attire, I swiftly pulled it over my tweeds and we marched into the lab – closely followed by not one, but two photographers.
However, once I saw what they had made the bearded chap manning the machines wear, I suddenly felt exceedingly well dressed. The fellow had a vast snood encompassing his growth and a red hair net, though, perhaps due to familiarity, seemed perfectly comfortable in such attire. 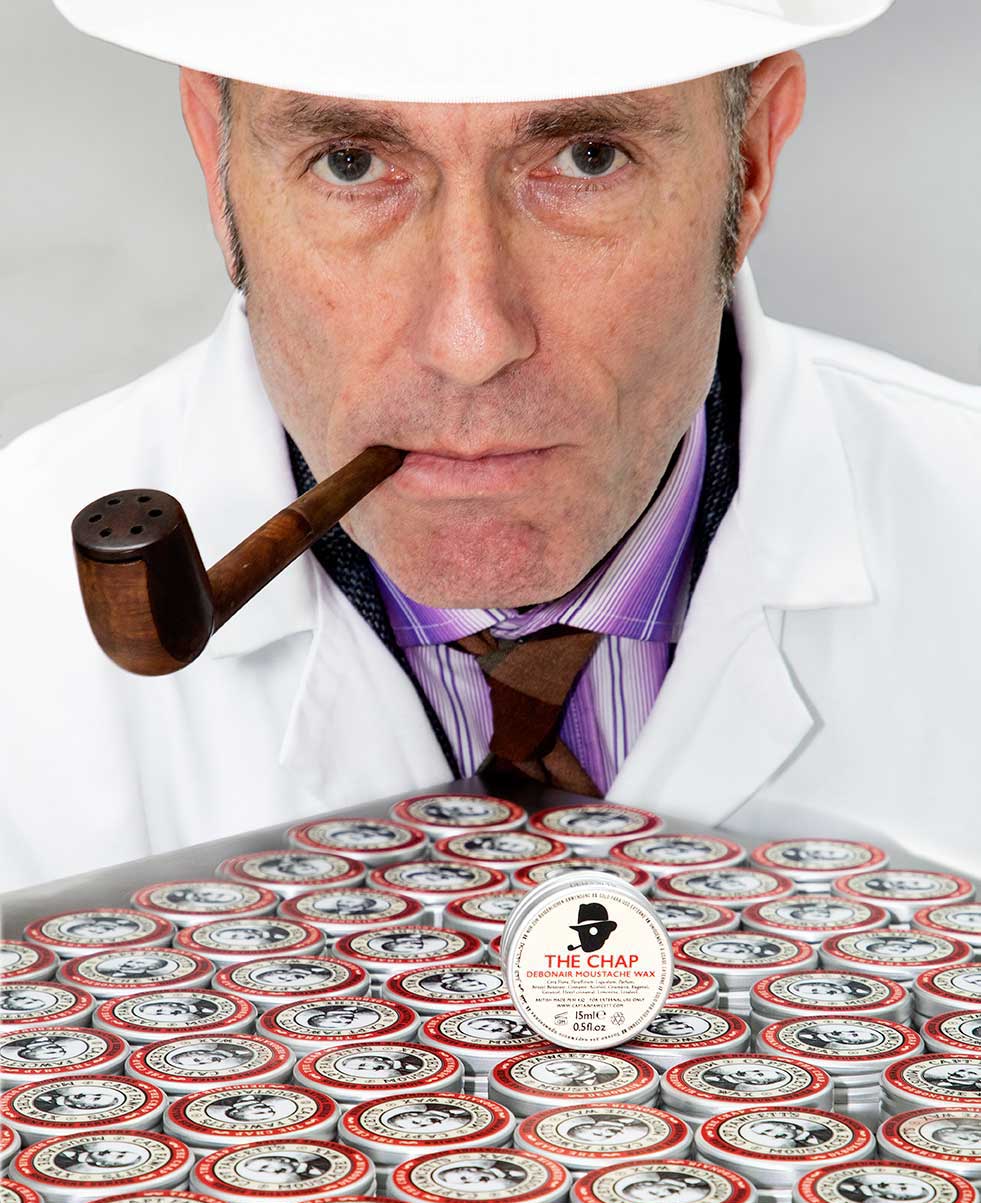 We watched the machine spew its aromatic juice, then observed it being inserted into tins. If this had been a Pathe News clip, all of us would have been puffing merrily away on our pipes, but sadly the No Smoking sign was quite clear, though I had managed to slip past a sign reading ‘Beards or Moustaches Must Be Worn Beyond This Point’. Getting my first sniff of Debonair made me wish I had spent the last three months doing something useful, like growing a moustache.
Mercifully, the time had come to remove our white coats and straighten our neckties for some photographs and video recording. A very patient young lady named Bryony recorded take after take of our unscripted ramblings, but the rapport betwixt myself and mine host was not difficult to summon. The aims and outlook of Captain Fawcett are not a million miles from those of The Chap. Vintage items and practices of the early 20th century are venerated, and the attention to detail in the factory must make for a very agreeable place to work (apart from when the postman arrives and a very loud klaxon interrupts our filming). Everything in the building, from the Victorian barber’s chairs to the drinks coasters, has either been lovingly restored or beautifully recreated.
My day at Captain Fawcett HQ had been steeped in old-world glories, convivial characters and gallons of sweet-smelling moustache wax, which more than made up for missing out on the historic centre of King’s Lynn.

DEBONAIR – BECAUSE YOUR WHISKERS ARE WORTH IT

The Summer edition takes pole position at the starting line. Heading the cast of our latest

CHAP Autumn 21 has sparks flying, sea monsters rearing and men lounging about in pyjamas and

The Summer edition takes pole position at the starting line.