You did the hair styling and make-up for all the cast on peaky Blinders since Season One. How much of a brief did you get at the start, on how their hair should actually look?
At my first meeting with the director, he said to me, I need someone who can do out of the box haircuts; something that doesn’t look quite right. I want something that nobody has ever seen before on screen. So my initial idea was that as soon as they put their Peaky caps on, all you see is skin all around, and the moment they take their caps off, they’ve got an individual haircut.

Each of the four brothers has a unique hairstyle, so that must have been difficult, with the constraints of the period?
Well, even though we wanted something a bit out of the box and a bit odd, you still have to design each hairstyle around the actor’s face.

Does each actor’s hairstyle change at all, over the seasons? I noticed that in Season 3, the back of Tommy’s hair looked a little longer than in previous seasons?
When Cillian Murphy first sat in my chair for his first haircut on Season 1, he said, ‘we need to do this in stages’. So I gave him a typical 1920s haircut and it just looked boring. And this show isn’t boring, so we need something to push it. So I graded his hair from a number 4, to a number 3, then 2 and then one, and gave him that line. So it really individualized that haircut. When we got to Season 3, Cillian said, ‘I want it a bit longer through the back and the sides, to show that my character is growing up. But don’t tell the rest of the boys.’ 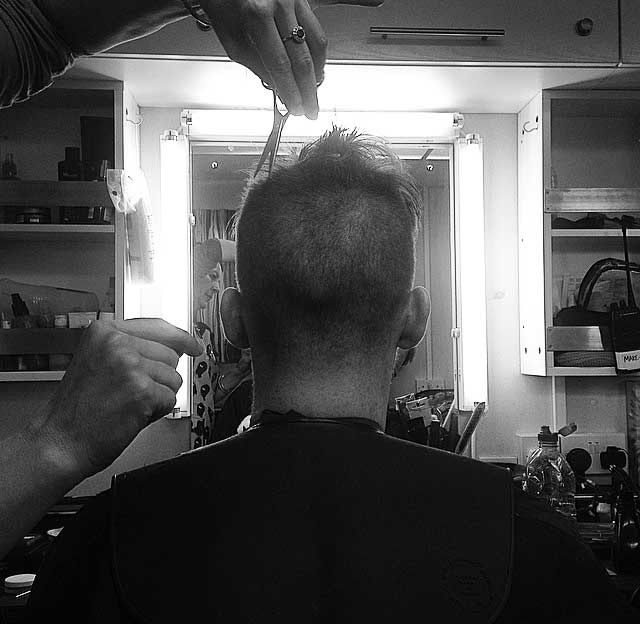 What about Arthur? I noticed that when he gets a bit heated and angry, his hair flops about a lot on the top. That’s all designed, is it?
Again, Arthur’s hair, when he’s got his cap on, is a Zero Guard. When he came to me, he already had longer hair, so I wanted to work with that hair. There’s a book which is my bible on this series, called Crooks Like Us.

Yes, I’ve got it! I love that book!
So there’s a hairstyle in there very similar to Arthur’s. I made it shorter through the sides and longer on top. Arthur’s character is a bit goofy; he’s a bit messed up, so the longer hair really works.

So was Crooks Like Us a big inspiration for you?
Yes, we all looked to it for inspiration, but varied it according to the person. What’s important about the Peaky haircut is it’s definitely not an undercut. In a GQ Magazine article, they did an article about 10 Things you didn’t know about Peaky Blinders. They didn’t ask us, they didn’t come to the source. They went to some barber and asked him how to do a Peaky cut. And he said, ‘It’s an undercut.’. But it’s nowhere near an undercut!

What is an undercut, exactly?
It’s where it’s really short underneath then longer on the top, so it flops over. You have to style the hair to suit the character. You’re not going to give Arthur a really clean-cut, short goody-two-shoes haircut.

Did you also style Arthur’s moustache?
Arthur, even though he’s a Peaky Blinder, still has to break every rule there is. The director, in season one, wanted him to have a big walrus moustache, and over the seasons we’ve shortened it. But this season he grew his own, which made it much easier to style, but he didn’t like having to take it home with him. ‘Loz,’ he said, ‘I’m not walking around with a Peaky haircut and a moustache!’ 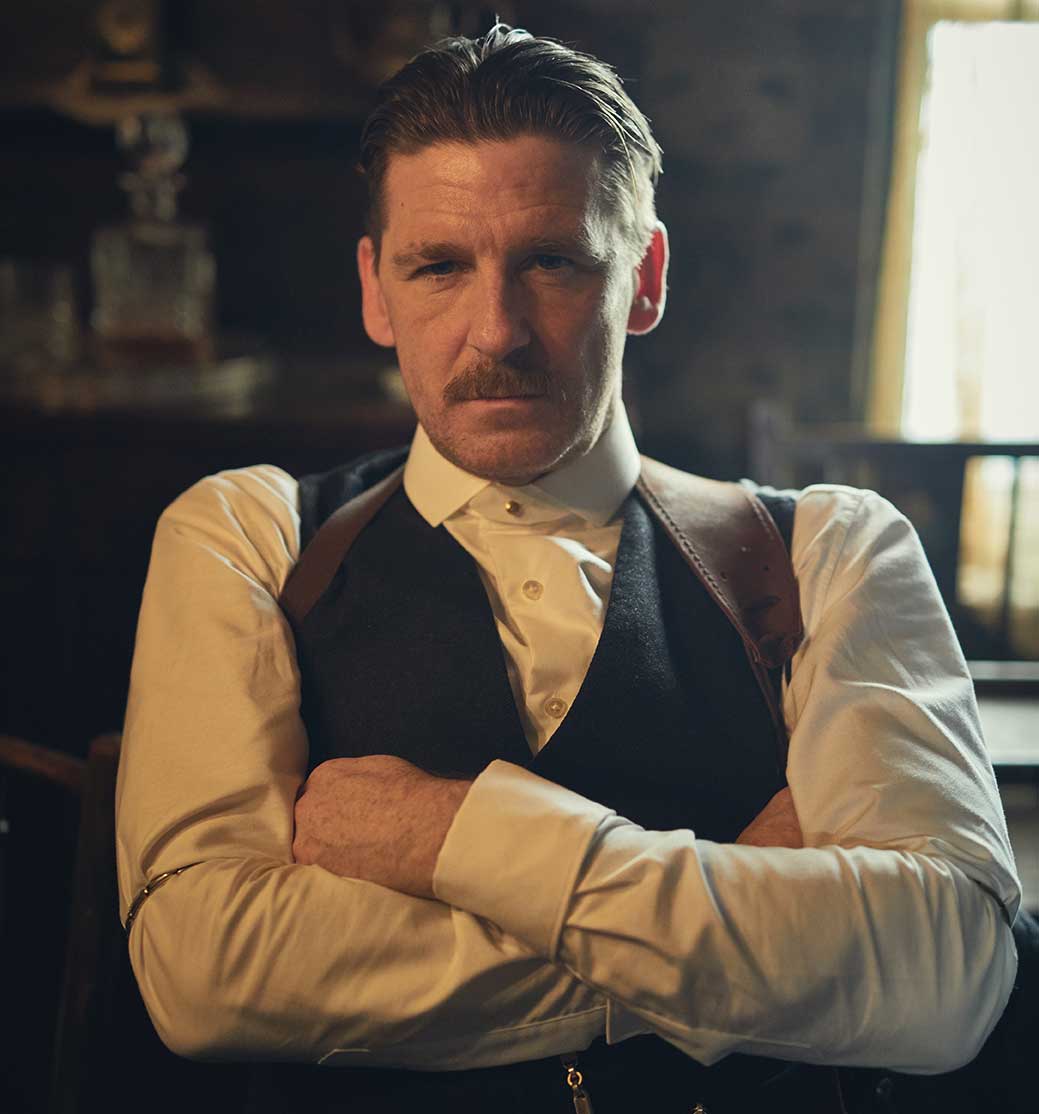 Since the series aired, have you seen many people with a Peaky hairstyle?
Oh yeah, I see it everywhere. When I first cut the boys’ hair in Season 1, they went out on the street after filming and people were staring at them like they were complete weirdos. ‘What hairdresser’s done that?’ But from Season 2, it just seemed normal. No-one looked at the boys’ haircuts when they were walking around, because everyone else had it. It didn’t look so menacing any more.

Since you do the make-up as well, does that mean you get involved in the cast’s tattoos?
Yes, we design all the tattoos.

Did you base them on real tattoos that people from the period would have had?
No, we made them all up. We use a company called Tattoo Now, and I give them a picture of what we want, and they replicate it on to tattoo paper for us. I talk to Cillian about what he wants; each tattoo has a special symbolism. So the one on his chest of sun rays was based on a real tattoo with a Jesus figure inside the sun rays. So we took the Jesus away and kept the sun rays.

Tommy wouldn’t have Jesus on his body, would he?
No, exactly! He’s not that type.

With Tom Hardy’s character, Alfie Solomons, was it more a question of covering up the actor’s actual tattoos?
Yes, he is very heavily tattooed. We might have just seen an arm, so we had to cover that up. 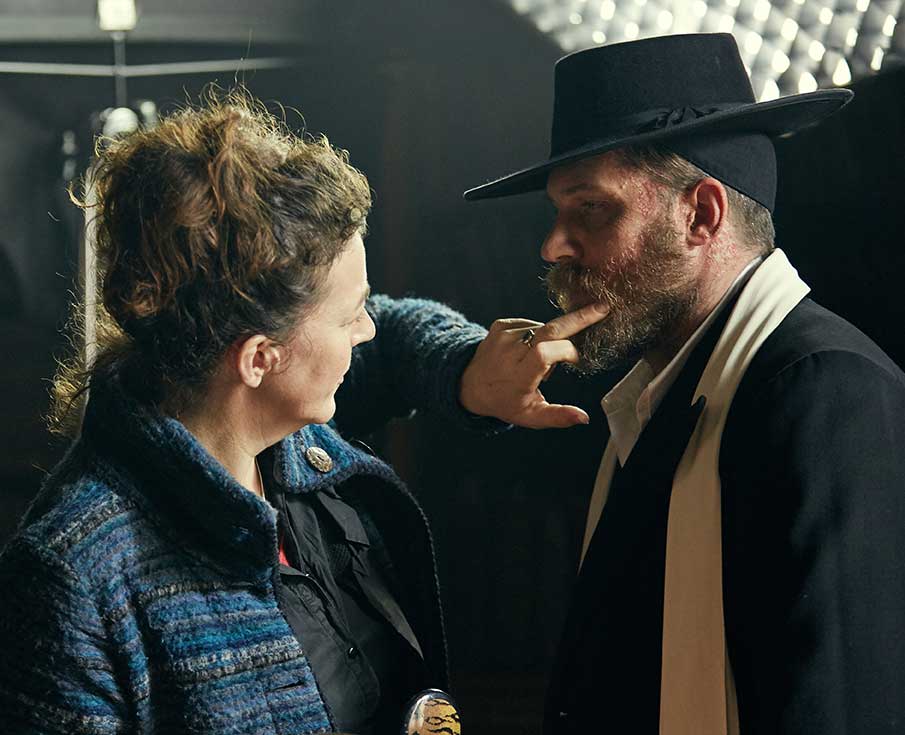 Would the character of Solomons not have any tattoos, being Jewish?
We gave him some hand tattoos. Although Jewish people traditionally aren’t supposed to have any inkings on their skin, Tom said, ‘Look, I’m not a traditional Jew.’ Tom’s really up for changing character. So I decided from the beginning to give him psoriasis, making his skin red and blotchy around the neck, beard and hairline.

Was that your idea or was that written into the script?
No, it was just my idea! From Season 1, Solomon has lung cancer, but we wanted something else that showed physically on the exterior. Obviously psoriasis isn’t a sign of lung cancer, but it’s not a sign of good health either. You know there’s something going on. But Tom’s great at remembering details like that. When we started on Season 3, he said, ‘Loz, I’m sure you gave me more psoriasis last time?’ So we slapped a bit more on, and he saved the continuity.

Season 5 of Peaky Blinders is currently in production.

As a tribute to the late actress, who died aged 52 on 16th April, Gustav Temple

UMC (Universal Music Catalogue) is releasing the first-ever official soundtrack to the series Peaky Blinders, in

Chris Sullivan met the triple Oscar-winning actor to look back at his
Gustav Temple meets the man declared by the Guinness Book of Records
As a tribute to the late actress, who died aged 52 on
Chris Sullivan meets the stylish actor to discuss the mod aesthetic, music,
Several years ago, Alex Smythe-Smith met the lugubrious actor, who recently passed
The Chap uses cookies to improve your experience. We'll assume this is tickety-boo for you, but you can opt-out should you so desire.    ACCEPT    READ MORE
Privacy & Cookies Policy

As a tribute to the late actress, who died aged