You cannot miss Boisdale of Belgravia. The strawberry-red frontage stands out like a Highland hunting lodge amid the upmarket estate agents (a set at Albany for £4.3 million, anyone?) and the fly-by-night delicatessens that look like reckless gifts from hedge-fund managers to their trophy wives. En route to our lunch appointment we paused to pay homage to the good old days of Belgravia by admiring the plaque outside Lord Boothby’s house of ill repute on Eaton Square.
Once installed at the Macdonald bar under the friendly auspices of a jovial Scottish barman, we were introduced to the modest selection of gins. He couldn’t find the printed list but announced, “I can tell you everything you need to know.”
What we needed to know was two large G&Ts made with a London Dry No3 gin and unpretentious miniatures of Schweppes. How quaintly 1970s! Once installed at table, we were attended to by a fleet of tartan-skirted Natashas, one of whom recited the day’s specials as if she had tasted each dish personally rather than simply memorised a list. 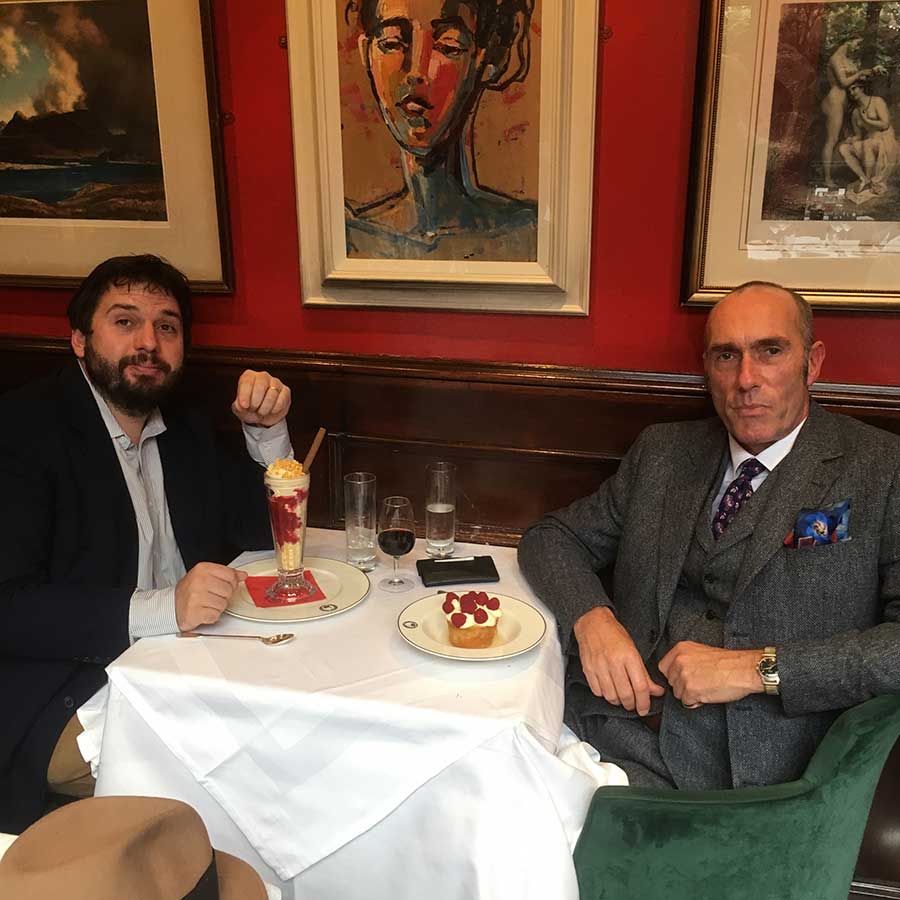 Lists are clearly not objects of veneration at Boisdale, and a glimpse of the owner slapping the backs of favoured customers showed why. Ranald Macdonald, the younger of Clanranald and eldest son of the 24th chief and captain of Clanranald, had a louche air about him. With flowing grey hair, a tweed jacket, white chinos and – we were not mistaken – black shoes, he clearly holds no truck with convention.
Which is precisely what gives Boisdale its charm. The stag’s heads on the walls jostle for space with mounted trombones and framed photographs of cool jazzmen. It has more of the air of a bohemian drinking den than a stuffy old-boys supper club, like some of its Belgravia counterparts. Lord Boothby would have been quite at home here.
We know that we want to share the chateaubriand for a main course, because the gently mooing Highland cattle that Boisdale serves must be made an example of, especially when served with black truffle mayonnaise and smoked béarnaise, and truffle chips. But this is a restaurant review, so we must start with something other than steak. Alexander takes the chili squid, which is battered to a ‘t’ and slips down just as well as that slithery octopod; Gustav ventures into the mackerel paté, which is slightly overdrowned in its bathing of melted butter. Just as well that we have taken two glasses of the white Bordeaux, which is a crisp, dry delight, and far too drinkable.
And then, onto Boisdale’s raison d’être. We have eaten a great deal of cow in our time, ranging from the impeccable to the unspeakable, and the chateaubriand here is firmly in the former category. It is presented simply – a 20oz behemoth between two – but has the perfect balance between marbled fat and succulent meat, and, coupled with the sauces, is quite the treat. We attempt to order a Bordeaux as an accompaniment, but upon being denied it, we plump – and ‘plump’ is certainly the operative term here – for a bottle of Portuguese red, the dou Rosa. Once decanted, it is the perfect accompaniment to a decidedly masculine – or Chappish – lunch.
‘Pudding? Pudding!’ So many decisions, so little time. We decide that the Knickerbocker Glory must live up to its name, and it does, in glorious fashion, and a Rum Baba is most enjoyable as well, its less flashy origins belying a one-two punch of the hit of the rum and the soft crumble of the sponge. Gustav takes a Pedro Ximenez (‘God’s own drink’), and Alexander peps himself up with an espresso martini. And then a regretful leave must at last be taken into the too-sunny streets of Belgravia.