From the eleventh floor balcony of a hotel overlooking the Pacific Ocean, the horizon flashing with lightning, brassy wisps of Mariachi music wafting up from somewhere through the heat of the night, was the sense that we were definitely in Mexico.
It had taken nearly 20 hours to reach this moment of Mexican awareness, though our sense of time had been hurled out of the window on the journey; it was either tomorrow or yesterday in England, the confusion of jetlag and 6-hour time difference loosening the mind from the shackles of the clock.
Puerto Vallarta is a sprawling series of resorts emanating from the old town centre, covering some 20 miles of the Pacific coast. It is overlooked by grand mountains that harbour entirely unpredictable weather. They might spend the night lashing the town with torrential rain, thunder and lightning (in August and September), then grace the following day with glorious tropical sunshine. The weather is as fickle as in the UK and as frequently discussed. One cabbie informed me that it can be pouring with rain in one resort and brilliant sunshine in another, a few miles along the coast. The town of Puerto Vallarta is a scruffy little overgrown village with a Franciscan church at its centre and dozens of markets with stalls all selling exactly the same things: ponchos, hammocks, sombreros, Day of the Dead figures, wrestling masks. 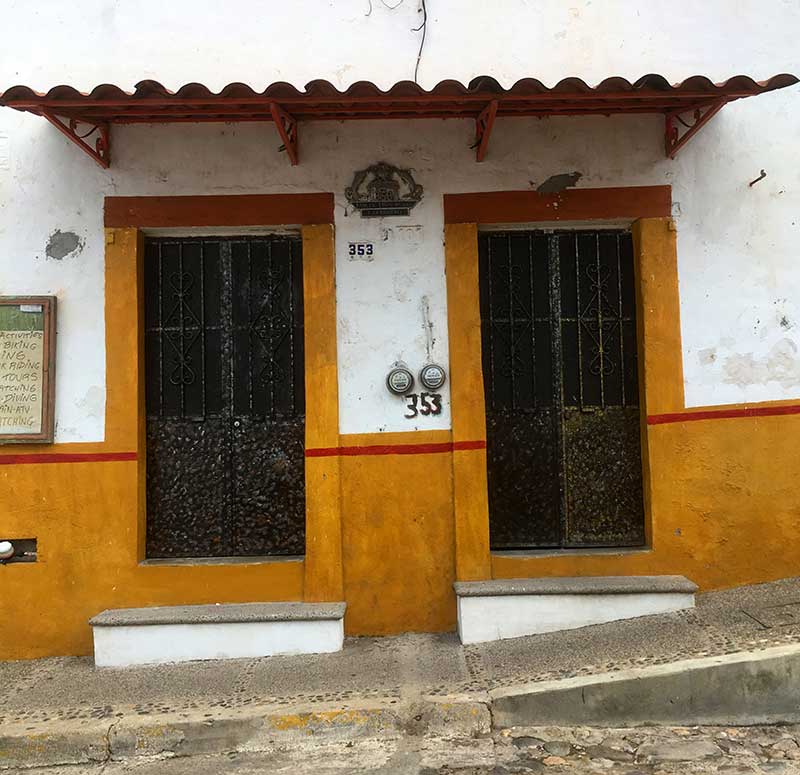 ECO ADVENTURE
Out first excursion was branded an ‘eco adventure’ to a group of islands where rare birds and strange fish lurked. For an hour or so our catamaran churned through the water, then as soon as land was ahoy we were suddenly handed masks and snorkels and practically hurled into the sea for an hour of snorkelling. The bar was open when we hauled in again an hour later. While we had been gazing at exotic fish and manta rays, the staff had been mixing up huge pitchers of margaritas. By the time we reached the next destination, we were all in the right mood for a slice of paradise – and that’s precisely what we got. An isolated beach only accessible by boat, surrounded by dense jungle. The catamaran could only moor 100 yards from the beach, so we were invited to swim ashore; the pair of Japanese tourists among us holding their selfie sticks aloft like the family jewels. I stuck my cigarettes inside my hat and waded in. It was like an amusing episode from the TV series Lost; but awaiting us on the beach was not a squabble for survival, but a leisurely saunter to another bar.

PIRATES OF THE PACIFIC
Second excursion: The Pirate Galleon. We boarded an authentic 19th century galleon at 8.30 am, with no idea what would happen next. “Breakfast time!” came the command from men in pirate costume, herding us into the galley.
“Showtime!” came the next command when we were back on deck. Various staples from the pirate repertoire ensued, with much singing and dancing. But this troupe revealed professional skills, with impressive swordplay and acrobatics, concluding with a backflip into the sea by the captain.
“Snorkelling!” was the next command, and we were lowered into a rowing boat and deposited into a cove in lifejackets and snorkels. Dignity had been sacrificed long ago but I was doing it for the kids.
A moment of solace can always be found, and I found it in that cove. The pirates, divested of their costumes, swam with us like any ordinary coast-dwelling Mexicans. The erstwhile Captain’s wench dove down and emerged to show us a sea urchin, without a single ‘Aharr!’ We were then rowed to a beautiful beach, where of course the bar was well and truly open. This excursion had clearly been designed to entertain the adults as much as the children. The return element of the show involved audience participation. The sight of a middle-aged American with a potbelly gargling La Cucaracha with a mouthful of rum will forever be imprinted on my mind.

NIGHT OF THE IGUANA
In 1963, John Huston filmed the excellent The Night of the Iguana in Puerto Vallarta. Based on Tennessee Williams’ play, the film starred Richard Burton, Ava Gardner and Deborah Kerr. Burton plays a defrocked Irish priest with a drink problem reduced to giving tour guides to elderly American dowagers. He would have been a big fan of the open bar, that’s for sure. Huston already had a place in Puerto Vallarta, and Burton was so taken with the place that he bought a house there, acquiring another one across the street for Elizabeth Taylor. To save him the trouble of crossing the road, he built a bridge connecting the two houses, which became known as the ‘bridge of reconciliation’ due to their fiery relationship. The house is now a rather swanky boutique hotel called Casa Kimberly, with a bronze sculpture of Taylor and Burton in the foyer, and the bridge is still intact, commanding fine views over the rooftops of the old town. The film set itself is still there, but ‘under construction’, which in Mexico could mean anything. 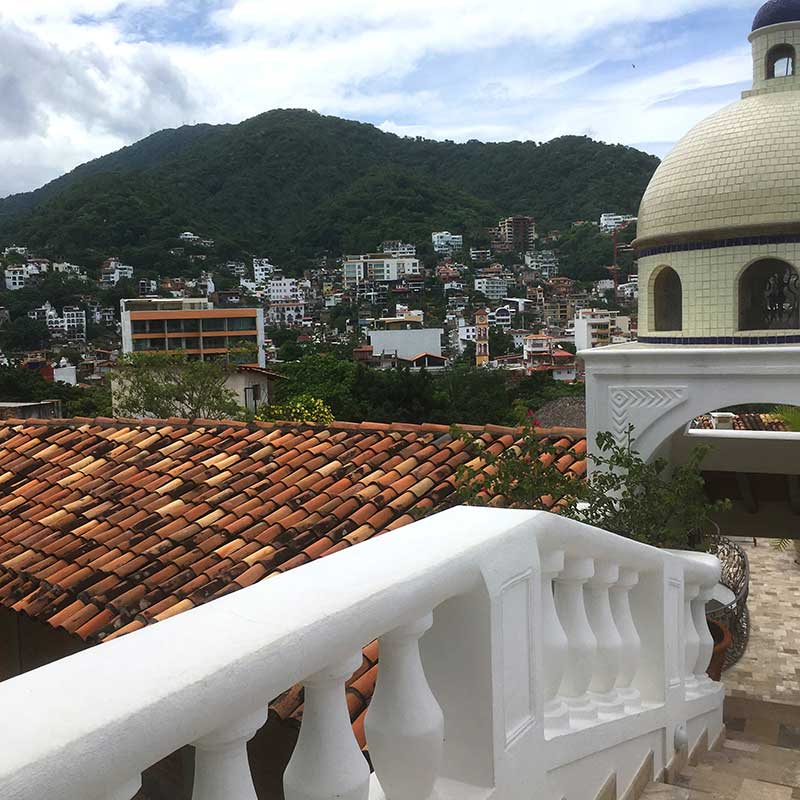 EXTREME ADVENTURE
The words ‘extreme’ and ‘adventure’ do not appeal to me in the slightest, but since my son was turning 14 in Puerto Vallarta, all the stops had to be pulled out for our final excursion. This one was in the jungle, for a change, with Vallarta Adventures, and we enjoyed an hour-long bus journey through the outskirts of Puerto Vallarta, passing shantytowns where cowboys herded cattle and the dentist was in a road shack next to a giant muddy puddle. This was High Plains Drifter on a minibus, which disappointingly didn’t have an open bar. However, I was glad of this when we reached the location for our extreme adventure and were shackled into our safety harnesses and given a safety briefing. My favourite Guayabera was immediately crushed and I was required to relinquish my trusty Panama for a crash helmet.
Zip Wires in the jungle are virtual paradise for a birthday boy and his sister who love high-octane thrills; quite the reverse for a 54-year-old man who isn’t particularly good with heights.
These are the moments where parental sacrifice truly kicks in – when you are strapped horizontally into a complicated pulley, 50 metres above the treetops, and told not to stick your arms off so they don’t get snapped off by the branches you will zip by at 60mph. ‘Luckily no-one will ever see my terror-stricken face on the 1200 metre ride,’ I thought, before a mini-cam was strapped to my helmet. 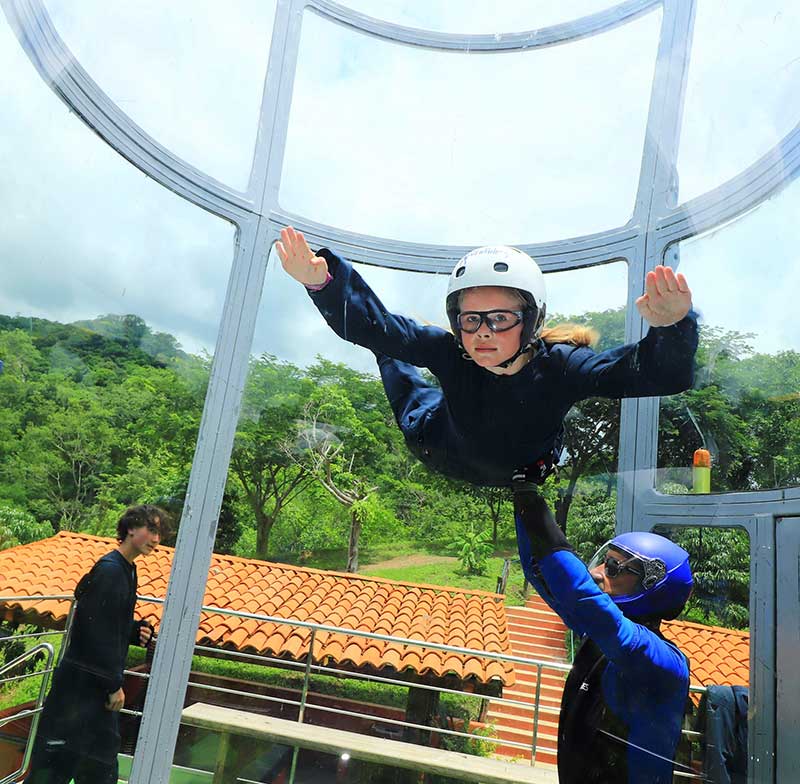 The flight simulator is a huge glass vertical tube with two superhero-clad instructors inside, where the wind from below blows you into the air and you’re supposed to fly. But man cannot, should not, and will never fly, I wanted to point out, as each member of our group clambered into the simulator. Every one of them did the same thing; hoisted into the air by the instructors for a second before crashing to the mesh ground. It was more or less like watching seagulls trying to drive a car, and just as amusing.
Parental duty fully furnished, I insisted on dragging my children around the old town again, trying to picture being on holiday in Puerto Vallarta with other adults. The food is incredible, even in the cheapest street joint. The beaches are spectacular and even during the rainy season, when we were there, the truculent weather wreaks its havoc at night, leaving every day basking in sunshine and puddles. Taking dinner in the harbour and watching the storms work themselves into a frenzy makes for a thrilling evening. A lone iguana wandering around the hotel gardens completed the exotic picture. The only hazard, for those of a British temperament, is the constant and unannounced dancing and singing, but we don’t go on holiday to meet ourselves.

This trip was arranged by www.flightcentre.co.uk
Accommodation was at www.nowresorts.com

On National Tequila Day, Gustav Temple samples a new tequila that lays to rest the drink’s

Gustav Temple finds that, forced to eschew the pleasures of a European
“Everyone gets everything he wants. I wanted a mission, and for my
I still find the Eurostar really rather wonderful. You get on a
On a recent trip to Rajasthan, I discovered that not only does
Kentucky is regarded as the first of the Southern states, sitting south
The Chap uses cookies to improve your experience. We'll assume this is tickety-boo for you, but you can opt-out should you so desire.    ACCEPT    READ MORE
Privacy & Cookies Policy