It is fitting that a shoemaker founded in 1880 brings out a new range, 138 years later, named after that founding year. Loake was set up by three brothers, Thomas, John and William Loake in Kettering, Northamptonshire at the house of Thomas Loake. In 1894 the company moved to much larger premises in Kettering, where Loake still operates today from the Unique Boot Factory. Busy making military footwear during two world wars, the company did not officially register the Loake brand until 1945, earning themselves a Royal Warrant by 2007. Those 138 years have seen many styles emerge from the Unique Boot factory, from Despatch Rider Boots for the British Army to Cossack Books for the Russian Army, and a multitude of civilian styles of footwear from chunky brogues to elegant loafers and everything in between.
Now comes the Loake 1880 Legacy range, on sale since September this year. The last 138 years have seen a multitude of different lasts pass through the Unique Boot Factory, and Loake has created two new ones specially for this range, the ‘River’ and the ‘Bullet’. Both incorporate elements of lasts from the past but add a contemporary finish in the toecap, creating a pleasing silhouette that also gives space for the feet to breathe. 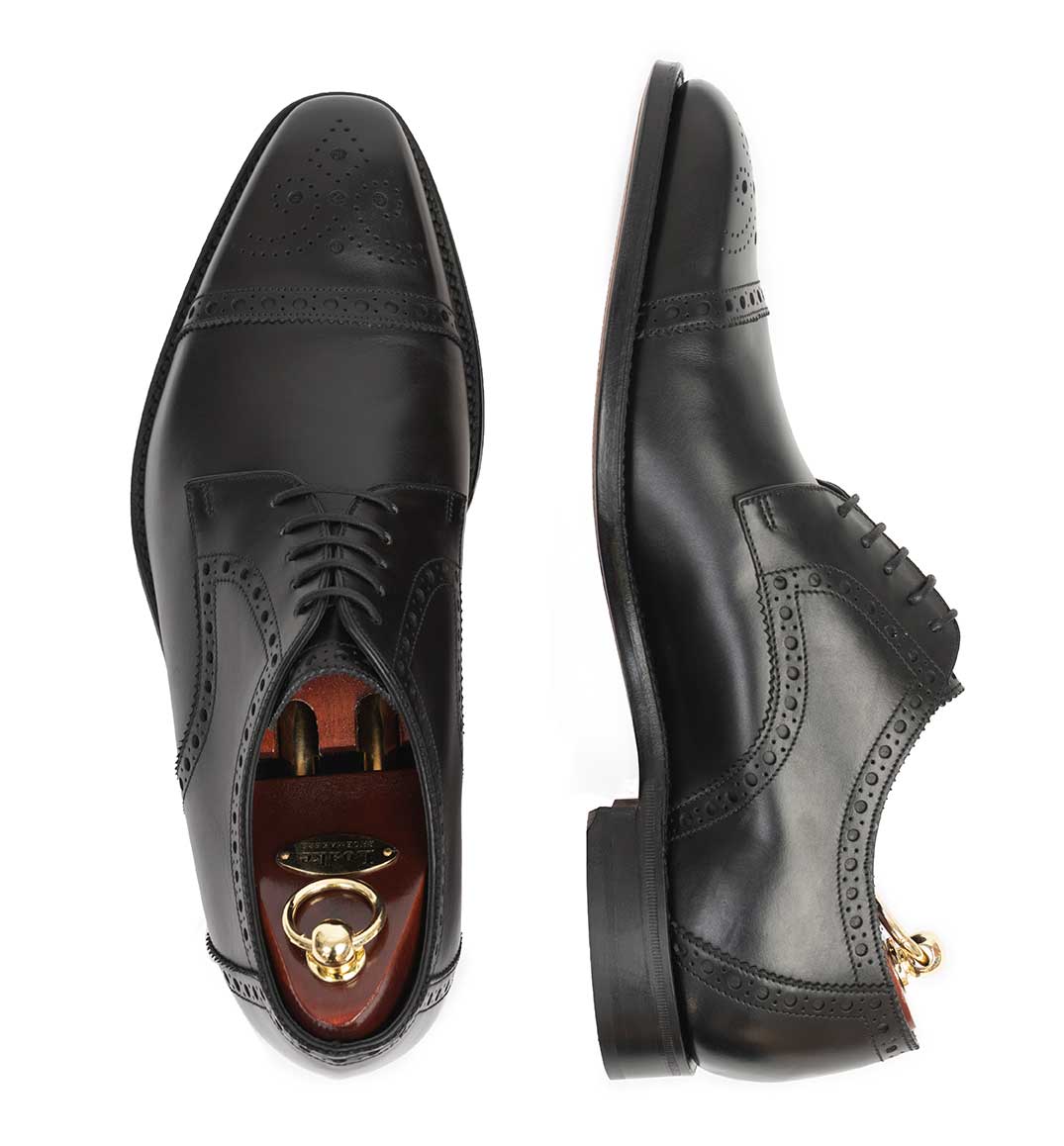 The model featured here is the Derwent in Black Calf, a half brogue (or semi-brogue) made on the ‘River’ last. The construction is top-grade Northampton-made Goodyear-welted calf leather. A vegetable-tanned leather lining assures a greater level of moisture absorption, while the engineering of the last provides increased arch-support for enhanced comfort.
So much for the technical details, but how does the Derwent actually feel? As a man whose winklepickers days are long behind him, yet who steadfastedly refuses ever to contemplate what some manufacturers describe as “comfortable shoes” (i.e. not remotely stylish or, even worse, designed primarily for sport), the River Last seems to fit the bill. The standard F-fitting width, often pretty snug on many Northampton-made shoes, gives plenty of room for manoevre, but the toecap angles to a chisel shape normally associated with a tighter fit.
The most important road test for any pair of shoes, as anyone who only wears footwear from Northampton factories knows, is that they shouldn’t need breaking in. The ‘breaking in’ of shoes is for schoolchildren and ladies who force their feet into toe-curling stilettoes. Northampton-made shoes should feel comfortable the very first day you wear them, and a full day of walking about, doing whatever you need to do, should not yield a single blister. 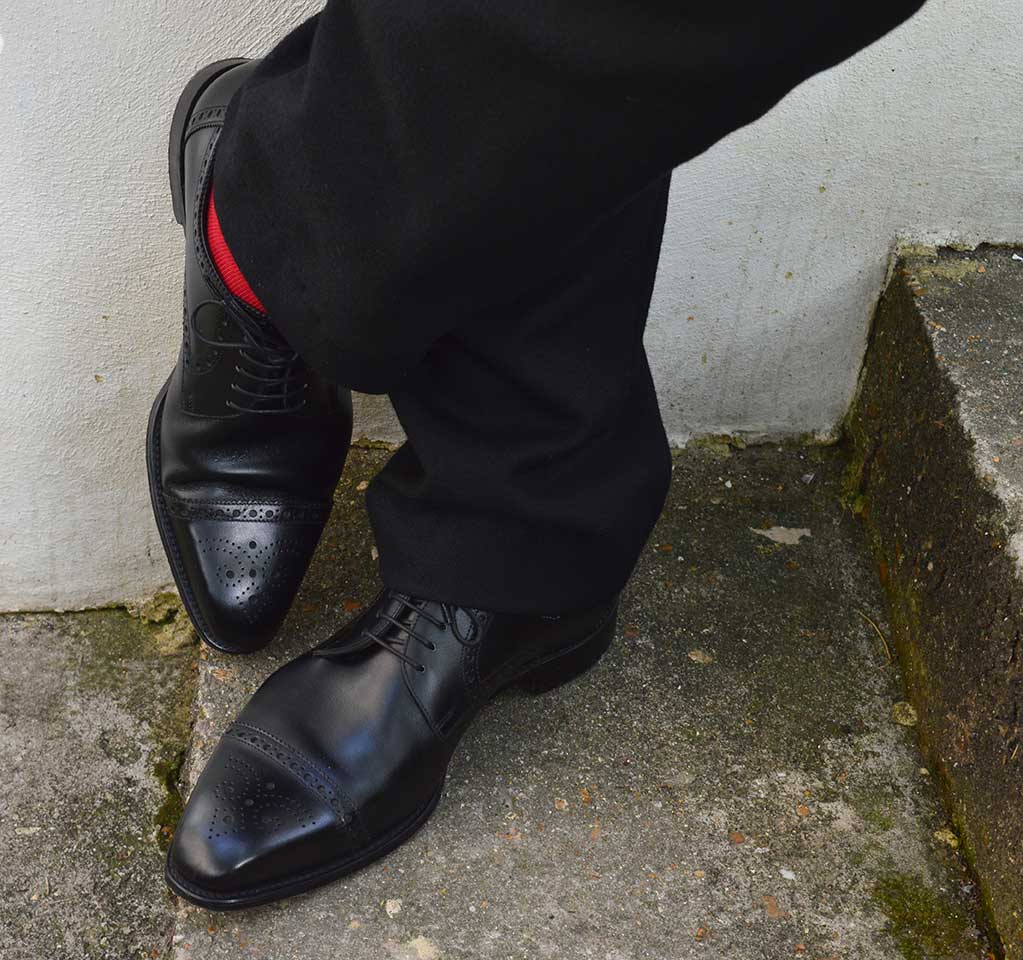 I put my Derwent half brogues to the test by wearing them on an all-day assignment in Central London, where the unforgiving pavements, underground escalators, cobblestones, discarded Coke cans, not to mention the Portland Stone steps up to Pall Mall gentlemen’s clubs (just to peek in the doors and dream of membership) made my shoes do their work.
I can reliably report that there were no blisters and no discomfort. While inserting a pair of shoetrees at the end of a new pair of shoes’ first working day, one always inspects the creases that have formed, which are there to stay and, if they’re not in the right places, there is nothing you can do about it. The shoe trees will absorb the day’s moisture and maintain the condition of the leather lining, but the exterior leather will have moulded itself around your feet and worked out where it has to give.
The solid construction of the Derwents had ensured they maintained their shape on the toecap and gently bent around the arch in a way that added to the elegance of their shape. Another pair of black brogues that had been my stalwarts for five years suddenly looked completely worn-out and ready to be consigned to the ‘putting out the bins’ selection (if in town, of course; I also have a ‘putting out the bins in the country’ selection).
I have a feeling that these new half brogues from the Loake 1880 Legacy range are going to see many good years of action before I have to put out the bins in them. I chose a half brogue because they are multi-purpose and can just as easily be worn for lunch at Boisdale’s, dinner at the Cinnamon Club and even for a black-tie event.

Loake 1880 Legacy shoes are available from loake.co.uk and in Loake shops and accredited stockists. Prices range from £240 to £275.

Some suggested cadeaux for the papa in your life, ranging from the mildly generous to the

Latest from The Chap Wears

You know when you get a new pair of brogues, and then
There are few items of clothing more in line with the ideology
An association between a 1960s blues guitar legend and an English country
A fashion photoshoot at Hornets Kensington is not just people with cameras
A stocking for every occasion? Well, they haven’t yet brought out a
The Chap uses cookies to improve your experience. We'll assume this is tickety-boo for you, but you can opt-out should you so desire.    ACCEPT    READ MORE
Privacy & Cookies Policy

Present a chum or relative with a subscription to The

Some suggested cadeaux for the papa in your life, ranging